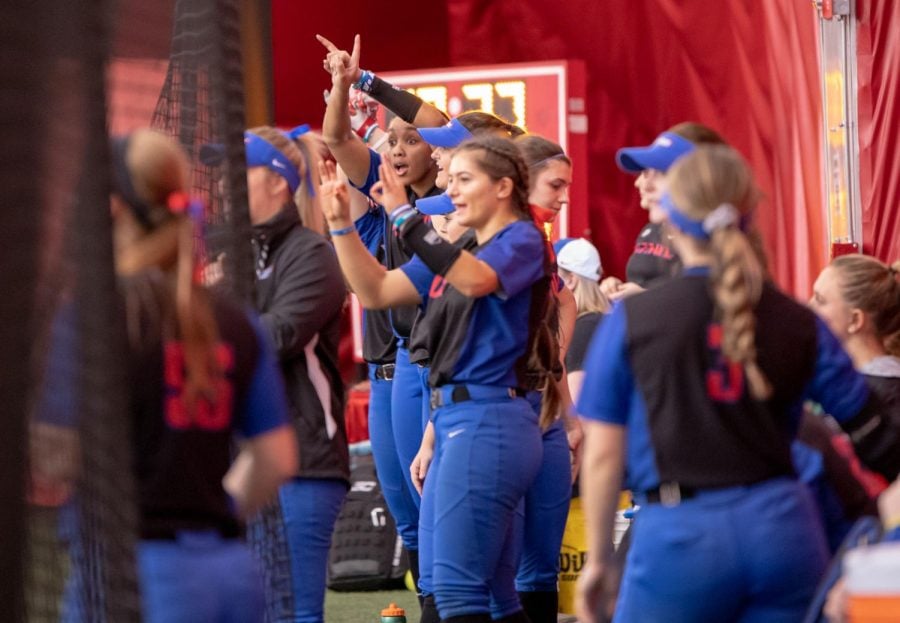 The DePaul bench celebrates a hit during a Feb. 9 game against Green Bay at the Total Control Sports Invitational. The Blue Demons went on to win game 10-1.

There are now four former DePaul softball players who have come forward to deny allegations of abuse by former softball coach Eugene Lenti laid out in a lawsuit filed in April.

Morgan Maize, who played under Lenti from 2012-16 and was a coach on the team from 2017-18, emailed The DePaulia Wednesday night to deny all the allegations against her former coach. She told The DePaulia that the “entire team begged” to have their voices heard when the first lawsuit was filed in April, but they were denied by the lawyers on the “opposite end.”

Angela Scalzitti, who played under Lenti from 2015-2018, emailed The DePaulia Thursday to do the same.

Maize refuted the allegation that Lenti pushed his associate head coach, Lindsay Platt, in the face in 2018, saying her exit from DePaul was “entirely planned out” following maternity leave and that the team knew about it before Winter Break — and that they were told the new coach would like to pick their own coaching staff, offering an explanation for the rest of the staff’s departure after Lenti’s 2018 retirement.

“That is the first instance where this lawsuit is falsified information,” Maize wrote in the email. “Eug did not put his hands on Lindsay or any of his coaching staff or players and she did not get ‘pushed’ off the staff. As a member of the DePaul softball team for four years as a player and then one as a coach I can say this with 100 percent certainty.”

Platt has not responded to The DePaulia’s multiple requests for comment.

“The notion that he ‘punched one of his assistant coaches in the face’ is completely ridiculous,” Scalzitti said in an email. “When you are on a team of 20 or so girls nothing can be kept a secret. If one of my teammates witnessed an incident like that, it would have spread across our team like wildfire.”

Conviser claims that as a mandated reporter of Title IX issues, she shared details of Lenti’s alleged abuse — including calling female softball players “f—–g whores” and punching their bodies — with the athletic department, and the office did not conduct an independent investigation of his behavior. If true, this would be a violation of Title IX, which says that immediate action, independent of law enforcement, must be taken by universities upon receiving notice of sexual violence or harassment.

Both Scalzitti and Maize dispute the allegation that Lenti verbally abused his players.

“Not once did I ever hear him call a player on my team a ‘f—— whore,’” Scalzitti said. “As a player, I would never willingly choose to stick around a program that made me feel unsafe and worthless.”

“He built us up as females, made sure we had one another (our sisterhood he called it) and made us believe we are powerful,” Maize wrote in the email. “That language is disgusting and something I as a player and coach would have known about and spoken up about. So once again I am refuting with 100% certainty that this ever happened. The years that the supposed incidents occurred I was there, I was present and these claims have no validity.”

The women who first came forward to refute the claims were former players Morgan Greenwood and Brianna Viles. Read The DePaulia’s reporting on their claims here.

The legal team for sports psychologist Dr. Jenny Conviser, who sued DePaul in April alleging verbal and physical abuse of players and assistant coaches by Lenti, says they “stand by their facts.”

“Our lawsuit is based on a player patient reporting that this event happened and our client encouraging her to participate in the title ix reporting system,” said Michael Popok, Conviser’s lawyer, in an email. “That the evenT (sic) was true or not is not relevant (although it obviously is true since they fired lenti off of it). What matters is that the reporting student athlete believed it was true and reported it to the title ix office setting of the retaliation.”

All the womens’ statements directly contradict the accusations laid out by Conviser. Read the lawsuit here.