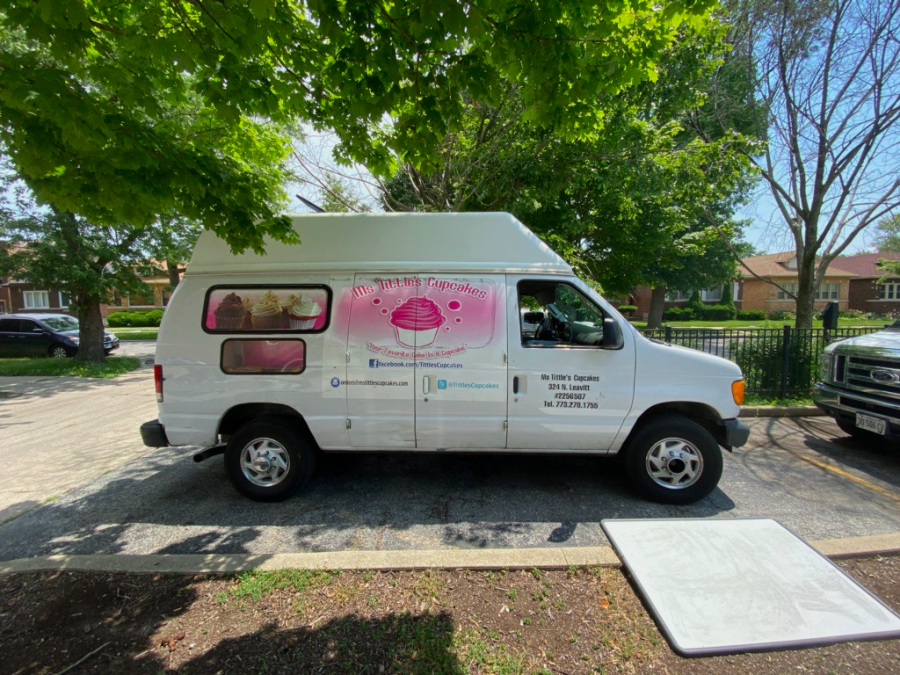 The van for Ms Tittle's Cupcakes, which will be featured at this year's modified Taste of Chicago festival.

The COVID-19 pandemic has forced the cancellation of many iconic Chicago events, including Lollapalooza, the Air and Water show and the Chicago Marathon. But last weekend, the city was able to host its popular Taste of Chicago event – but repackaged as “Taste of Chicago To-Go.”

On July 1, Mayor Lori Lightfoot and the Department of Cultural Affairs and Special Events (DCASE) announced the redefined Taste of Chicago, which took place from July 8 to 12.

“SummerDance in Place” kicked off as the new, at-home version of Chicago’s social dancing tradition and the audience tuned in via broadcast or social media. Participants were encouraged to host events with 50 or fewer people inside or 100 or fewer people outdoors as long as they were following the guidelines to Chicago’s Phase Four reopening procedures.

“Taste of Chicago completely evolved,” said Ali Dewjee, managing partner at Bombay Wraps. “The city had a great idea, instead of cancelling all plans and putting it on hold or rebooting for the fall or new year, they kind of created a community component which we participated in.”

“They identified a few restaurants that could be partnered up with nonprofits and or hospitals. We continued to share ‘our eats’ and talk about it and promote it but also have a nonprofit or hospital take advantage of it,” Dewjee said.

While the event wasn’t as extensive and engaged as it is in its traditional form, many participants found it to be enlightening and supportive to their businesses. After months of citywide shut downs and no dine-in seating, it was important for small businesses to be back in the limelight.

“It went excellent as far as the exposure to our business,” said Cynthia Boyd-Yette, owner of Cynthia’s Gumbo Express. “This would have been our first year, so by reaching out to us to do the Taste of Chicago To-Go, we were really happy about it.”

Boyd-Yette also shared that the event helped her food truck business get on the map again.

“We normally were at the University of Chicago and we would serve them during the week,” she said. “Once the university shut down then that pretty much was our revenue – so we just stayed in, parked the truck and shut down.”

Ms Tittle’s Cupcakes has participated in Taste of Chicago since 2014.

Denita Tittle, owner and chief baker of Ms Tittle’s Cupcakes, shared that the event offered some sense of normalcy to Chicagoans and customers.

“This one family came, they had two daughters and they were saying they were going to the Taste of Chicago every year since it started,” Tittle said. “She did what she normally does and finds out who is going to be there, makes a decision where they are going to eat at and then goes – that’s what she did.”

Like some other participating food trucks  were able to do during the event days, Tittle was able to park her truck where she hoped to. At the South Shore she was pleased to see a good response of customers – 50 to 100 people..

“It was nice to see people, some people that saw me Saturday actually came back to the new spot I was at on Sunday,” Tittle said. It was nice to be out there, plus knowing people are still kind of doing what they normally do.”

Asana Nakornchai, owner of BITES – Asian Kitchen and Bar, felt that the Taste of Chicago To-Go advertising may have caught the attention of potential customers.

“I think we got a couple of tables that actually came in for dine in and they said they saw us in an article about Taste of Chicago,” she said.

Nakornchai shared that BITES has participated in   Taste of Chicago since 2018, and this year they decided to join again for their pride after battling with the pandemic shutdowns. They have also been involved with the Community Eats program and partnered with Illinois Masonic Hospital.

Other restaurateurs felt that transforming Taste of Chicago into this new fashion was better than not having it at all.

“[Turnout] was definitely lower, we know that for a fact,” Tittle said. “But I can say it was good to have something going on for Taste of Chicago, whether to not have it at all.”

Forty-two diverse eateries and food trucks participated in this new and reimagined event.

The schedule of the events that took place along with the participating eateries can be viewed on the city’s website where late attendees can download demonstrated recipes and video clips of the virtual festivities.