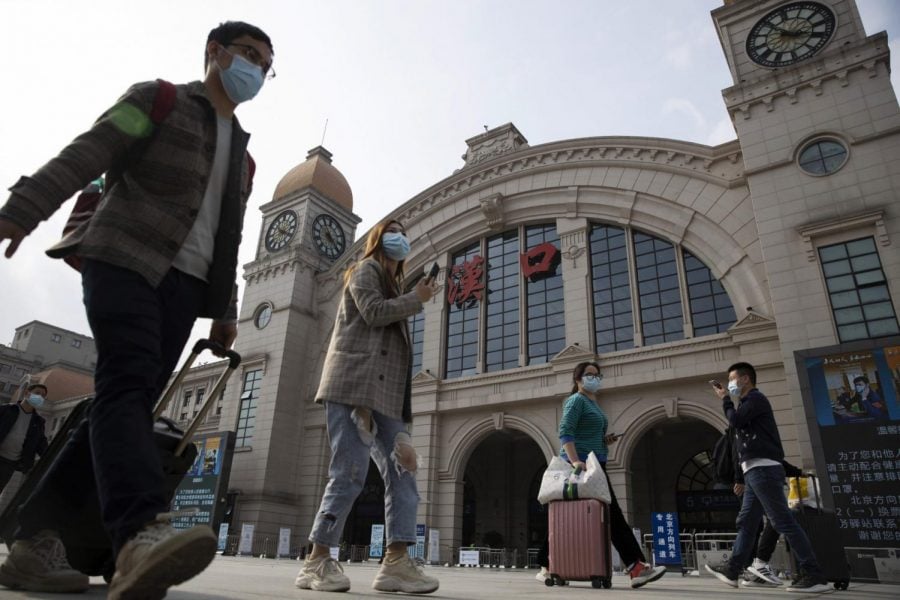 Travelers with their luggage walk past the Hankou railway station on the eve of its resuming outbound traffic in Wuhan in central China's Hubei province on Tuesday, April 7, 2020. Starting Wednesday, residents of Wuhan will be allowed to once again travel in and out of the sprawling city where the coronavirus pandemic began, ending an 11-week lockdown.

If approved, the ban could revoke the visas of CCP members and their families who are already in the United States, likely resulting in their expulsion from the country.

Hua Chunying, the official spokesperson for China and the director of China’s Foreign Ministry Information Department, said at a July 17 press conference that such a travel ban would be “absurd”.

“If the report is true, the U.S. is publicly choosing to be in opposition with 1.4 billion Chinese people […] who account for one fifth of the population in the world,” Hua said. “This completely violates the will between the U.S. and China and the trend in the 21st century.”

Haotian Xue, a DePaul business school senior-year student from China, said he’s unhappy with the proposed travel ban targeting Chinese people. His grandparents are CCP members, and his grandma would be especially impacted since she’s always loved traveling to the United States.

“The action allows no flexibility to [members of the] Chinese Communist Party,” Xue said. “I don’t agree with this. This will harm people’s craving for America – a country full of freedom.”

Dr. Li Jin, director of Chinese Studies at DePaul, said the policy is neither clear enough to execute nor effective enough to reach its goal. It’s difficult to differentiate between Chinese citizens and full CCP members in the U.S. and, Jin said, many Chinese citizens don’t see CCP membership as a political identity.

“There isn’t any existing list that can be easily accessible by the US border control to identify whether every traveler coming from China is a CCP member,” she said. “Many people in China join CCP just because it is part of a job requirement, such as a certificate or something to show they are part of the elite group of their peers. So the CCP membership to many Chinese people is much more a pragmatic decision rather than an ideological or political affiliation.”

Jin said banning the entire CCP membership may not actually help Washington achieve its goals, since many CCP members either oppose, or are unaware of, Beijing’s policies.

“On the other hand, this ban only accelerates the decoupling between the U.S. and China,” she said. “It shows this U.S. administration’s hostility toward Beijing.”

U.S.–China tensions have intensified in recent months. Beijing’s decision to impose a national security law on Hong Kong led the Trump administration to terminate the United States’ preferential treatment to the city in trade and travel. Washington has also started blocking visas for employees of Chinese tech companies like Huawei, and the Trump administration is considering a ban on social media apps like TikTok which are owned by the Chinese government.

Secretary of State Mike Pompeo said at a press conference that in order to protect national security and the information of U.S. citizens, the act of banning certain Chinese social media platforms is inevitable.

“The mission side is to protect American national security, and in this case, the information of American citizens,” he said. “So whether it’s Tik Tok or any other Chinese communications platforms, apps, infrastructures, the administration is taking seriously the requirement to protect the American people from having their information up in the hands of Chinese Communist party.”

On July 14, Trump signed legislation and an executive order to hold China accountable for oppressive action against the people of Hong Kong.

“This law gives my administration powerful new tools to hold responsible the individuals and the entities involved in extinguishing Hong Kong freedom,” Trump said. “We’ve all watched what happened. Not a good situation. Their freedom has been taken away.”

“I understand concerns revolving around the increasing competition between the U.S. and China, and Beijing’s highly questionable policies and actions in Xinjiang, Hong Kong, and South China Sea,” she said. “A lot of the anxiety and concerns felt by the U.S. is legitimate. But the vast majority of recent China policies from the Trump administration are short-sighted and hasty, [and are] not going to yield any positive results in terms of the long-term benefits of the U.S. or the world peace.”

Jin said the bleak situation of the U.S.-China relationship, one of the most economically significant bilateral relationships in the world, is largely caused by Trump’s hostile China policies in the past year.