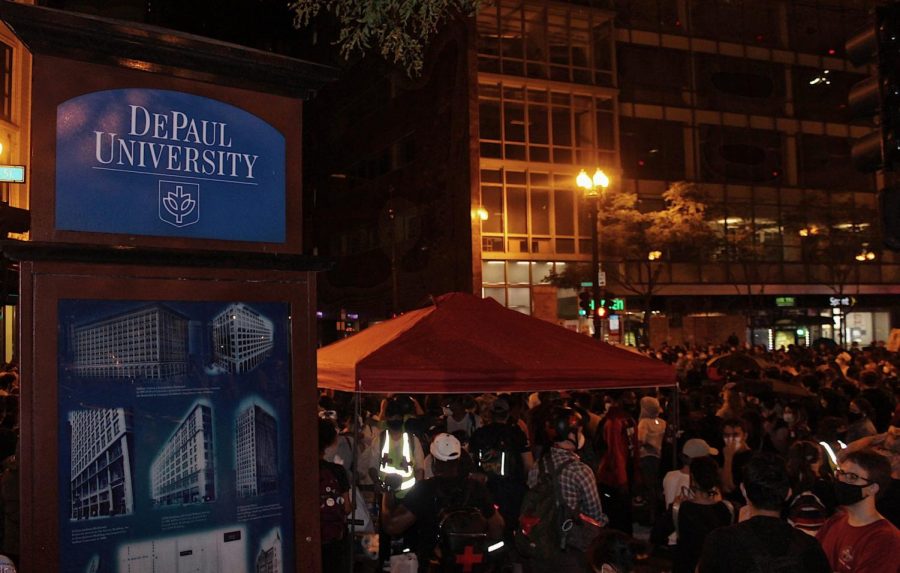 Chicago students from eight major universities gathered Saturday in support of the Solidarity Street: Abolish CPD Block Party to demand the termination of university contracts with the Fraternal Order of Police (FOP) and the Chicago Police Department (CPD).

The protest started at Millenium Park and ended with a block party on the intersection of Jackson Boulevard and State Street, in front of DePaul University’s Loop campus. The block party included speeches and performances and a tent set up with water and snacks. Protestors were also painting and drawing messages on the ground with chalk.

Along with the termination of contracts, protesters demanded universities refuse to cooperate with the U.S. Immigration and Customs Enforcement (ICE), invest in transformative justice processes that don’t involve policing, divest from military industrial complexes and lower tuition costs as remote learning continues.

Chicago schools/colleges coming together to – demand schools to end its relationship/contracts with FOP or CPD. – refuse to cooperate with ICE. – reinvest in mental health and healthcare resources for students in the community – lowering tuition & housing (if fall quarter continues online) In solidarity, after the march/protest students will have a block party (8pm) with local artists, food vendors, and have an open mic to create/build community in an effort to heal and transform our schools and communities towards liberation.

“[Universities] really spoke to statements of solidarity and statements of commitments to justice, but a lot of the statements that are released really don’t take into account what students are actually asking for,” said an anonymous Solidarity Street organizer from Northwestern University. “I think the university sees our demands as a small minority of students who want these very fringe ideas.”

A speaker from Dissenters, an organization of young people who protest against the use of economic resources in the war industry, spoke about the militarization of the police and the military’s use of anti-blackness to fuel their agenda.

“The police have always been militarized, but they have been using more militaristic practices in our neighborhoods,” said the speaker.

Organizers encouraged students to educate themselves on their respective universities’ relationships with FOP and CPD.

Ariel Atkins from Black Lives Matter Chicago spoke in Millennium Park about the realities faced by Black and Brown protestors in relationship to the police.

“We were beaten and tear-gassed because they are afraid,” Atkins said to the crowd. “I watched cops beat protestors and rip their bikes from their bruised hands then throw those bikes at other protestors, then they claim that they were weapons.”

Protestors occupied the intersection at Washington Street and Michigan Avenue and those who brought bikes created a wall to block out the cars. A small dance circle broke out before protestors continued towards Jackson Boulevard and State Street.

As they continued on, protestors participated in a series of chants including “CPD we want you out” and “No justice, no peace, abolish police.”

After their arrival in front of DePaul University’s Loop campus, protesters were dancing to music and live performances, drawing and painting on the ground and delivering more speeches. When the event ended around 11 p.m., organizers requested that protestors leave in groups.

Organizers from Solidarity Street wanted to make a statement to their respective universities through numbers and collaboration.

“There’s power and safety in numbers, and I really think that universities don’t want us to work together. They know that there’s going to be more publicity and they don’t want to look bad,” the anonymous protester said. “Especially the ones that consider themselves socially liberal.”