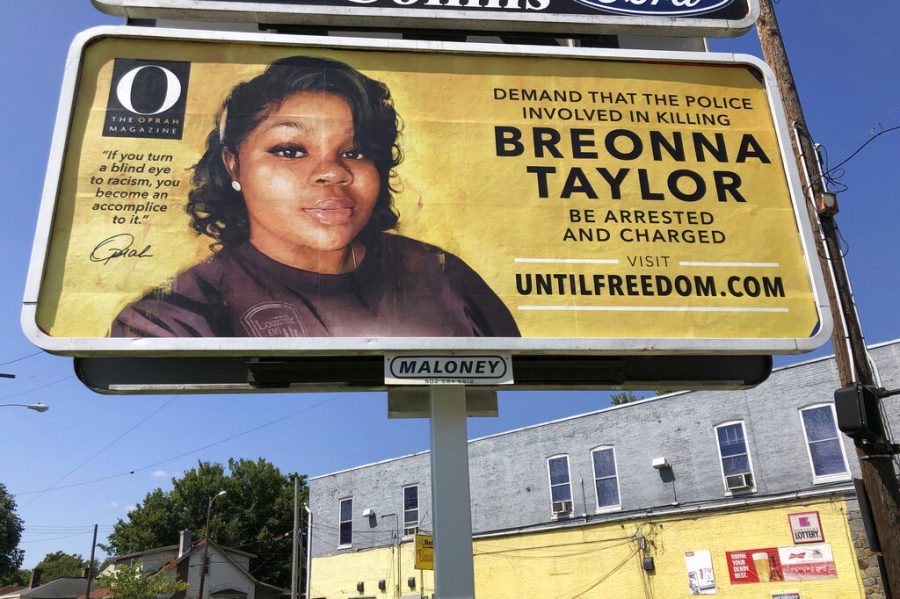 A billboard sponsored by O, The Oprah Magazine, is on display with with a photo of Breonna Taylor, Friday, Aug. 7, 2020 in Louisville, KY. Twenty-six billboards are going up across Louisville, demanding that the police officers involved in Taylor's death be arrested and charged. Taylor was shot multiple times March 13 when police officers burst into her Louisville apartment using a no-knock warrant during a narcotics investigation. No drugs were found. (AP Photo/Dylan T. Lovan)

The Black Lives Matter (BLM) movement has spread across social media, spreading information about police brutality, local protests and petitions. Through pages dedicated to social justice issues and spreading awareness, the average user can actively learn more about creating positive change for BIPOC  (Black, Indigenous and People of Color) communities. However, not every post can be helpful.

“What strikes me is that there’s a lot of [performative activism] but then there’s also a lot of amazing organizing that has happened to Twitter,” said DePaul assistant professor at the College of Communication Dr. Samantha Close. “I mean, that’s where Black Lives Matter came from is the work of different black female activists, on Twitter. It’s always really important to make a distinction between the fact that some people are on there being their performance self and using these things in a really shallow way.”

A huge instance of performative activism was the #blackouttuesday2020 tag that circulated around Instagram on June 2, 2020. Although the goal was to spread awareness for police brutality victims, many used it as a means to advance their social status rather than further the movement.

The hundreds of posts clogged the BLM tag on Instagram and Twitter, making posts with vital information about petitions and protests hard to distinguish. These posts had good intentions, but posting a black square does nothing to positively impact the BLM movement. We may have been performing and not even know it. It’s important that we reflect upon ourselves as to what our actions are truly doing to help the movement.

DePaul Adjunct Professor at the College of Communication Evan F. Moore believes that the absence of historical context furthers the negative impact of memes in the BLM movement.

“Over time, activism has indeed worked, despite the fact that you know what beams different people. I mean it’s propaganda, right?” Moore said. “If you believe a certain thing, are you gonna really go out there and search?”

Some may try to undermine the BLM movement by creating a double standard of Black on Black crime vs. white crime.

“They say ‘Black on Black crime’ to undercut Black Lives Matter and other activism a little bit, but do we look at the context of that? To me, to look into how people live near each other often kill each other. When school shootings happen, why isn’t it white on white crime though?” Moore said.

By erasing the context of these situations, we skew the public’s view on crime, making it seem as if Black on Black crime is due to underlying racial tensions. When in reality, it’s due to other tensions, unrelated to race or ethnicity.

Without proper education and context, how are we going to distinguish between true racial inequality and other racially unmotivated crime?

“It’s something where the people were deceived, know what they’re doing is underhanded and like I said it’s as often as often devoid of history, context, thought and empathy,” Moore said.

Memes are posts that can be funny or trivial, and are mostly inserted in situations to make light of it. Although the BLM movement is a serious organization, the insertion of memes trivializes the significance of its work while promoting performative activism.

One of the most popular memes that has circulated around the BLM movement is “Arrest the cops who killed Breonna Taylor.” Taylor was a 26 year old EMT who was murdered by police after they broke into her home and shot her. As a victim of police brutality, her case rapidly spread throughout social media.

Although many say her name to remind lawmakers that the cops were never arrested or charged for her murder, memes have been created out of the phrase “Arrest the cops who killed Breonna Taylor.” On surface level, saying Taylor’s name reminds us that her case was never resolved, and she hasn’t received justice. But how much does it help to just repeat the same phrase over and over again?

“Keeping these folks’ names in mind kind of furthers the moment. I mean you saw many sports leagues, particularly Tampa Bay Rays of Major League Baseball, tweeting ‘you know today will be a good day to arrest the killers of Breonna Taylor,’” Moore said. “Most people on the surface level say ‘okay that’s a good thing.’ But think about it, it’s gotten to a point where her name is turning into a meme. It’s turning into someone or saying, ‘Oh, 28 to three,’ it’s like a joke, and the way he lost her life was no joke. Something like that can turn into something that’s serious and truly awful.”

Today is Opening Day, which means it’s a great day to arrest the killers of Breonna Taylor

Close also agrees that depending on how people use the phrase, it can create positive or negative change.

“As far as what the goal of those kinds of things are is saying ‘hey remember this happened,’” Close said. “This is still trending, this is still happening people are still saying her name. I think it does kind of accomplish something in that realm, just continuing awareness, but it also is stepping up best. It’s kind of tricky, because if it’s too much someone is looking for an excuse to dismiss something they’re probably not the audience for that anyway. So I think the notification does a good job of keeping it in you and keeping the discussion going,  and ‘Hey, this was never resolved.’

Despite these setbacks, social media creates more accessibility to these social justice issues. By the easy sharing of a petition link, infographic and donation fund, we can take the initiative to educate and help ourselves and the movement.

“I am definitely someone who is in favor of using memes and using the internet as a method of publicity. I think there’s a lot to be done there and there’s a way that it can help make social justice issues being much more relatable and tangible,” Close said.

We must be more aware of the ways we contribute to the BLM movement. Performative activism will not advance the movement in a positive way, and we must assure that we can be actively engaging in social change.

We must also hold ourselves accountable with harmful memes that may not be solving the problem. As we move forward along with the BLM movement, we can reflect our actions and become better as individuals, and allies.