OPINION: Alexandria Ocasio-Cortez is a source of pride for young Latinas 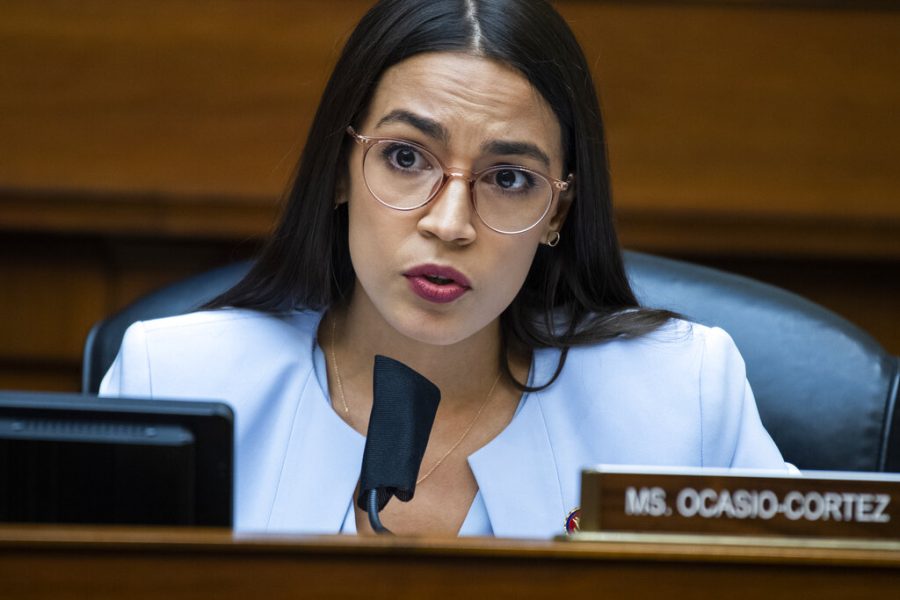 Numerous negative stereotypes have plagued Latinas for decades. We are perceived as angry and loud, with more emphasis placed on our looks instead of our character. Young Latinas have struggled with overcoming these stereotypes while navigating through society. Strong female role models are the key for Latinas to overcome negative perceptions and see positive representation beyond TV and media. Young Latinas need to see themselves in business, STEM, and politics. Alexandria Ocasio-Cortez (AOC) is the Congressional District 14 Representative of New York, and is one of the most prominent Latina women  in the House of Representatives. AOC’s representation for Latinas in politics has impacted young Latinas across the country to engage in diplomacy.

AOC’s impact goes beyond the House and Democratic Party and extends to the generation of young Latinas who can also create an impact. She sets an example for young Latinas to be confident and persistent in their beliefs, while also demanding respect from others.

College freshman Anjelica Rodriguez was inspired by AOC to pursue an education in politics. From the beginning, Rodriguez was fascinated by seeing a strong, passionate Latina woman who was persistent about her beliefs.

“I first heard about AOC from a program called National Hispanic Institute (NHI) my sophomore year when the founder talked about how AOC had been a part of the program back in high school,” Rodriguez said. “I did my research about her and I became instantly inspired seeing a woman of her caliber in politics that I had never seen before.”

AOC was publicly accosted by Florida Representative Ted Yoho when he called her a “F*cking b*tch” when she spoke of the over policing of marginalized communities. AOC did not tolerate the disrespect and responded to Yoho by saying “B*tches get stuff done.” Rodriguez admires her response, believing that the disrespect goes beyond a mere disagreement in policies, but is instead rooted in internalized stereotypes.

“People just want to dismiss AOC as a crazy Latina who’s screaming into the mic about radical ideas,” Rodriguez said, “when in reality, they’re challenged and intimidated by a strong opinionated woman and aren’t ready to hear refreshing ideas. I admire her response because she doesn’t take any shit from anyone.”

AOC’s background as a Latina from the Bronx pushes the boundaries of what the common congresswoman looks like. By drawing her own experiences from her upbringing to address issues in Congress, she differentiates herself from other politicians. Her dedication to creating change makes her more a part of the community she represents, rather than being above them.

“She isn’t your typical born wealthy girl,” Rodriguez said. “She is here to challenge the common status quo and bring in the youth to do so. She focuses on winning the hearts of a person through her ideas instead of focusing on votes.”

Other than seeing Latinas in TV and media, it’s equally important to see women of all background representation in Congress. Her presence in the House allows for young Latinas to see themselves creating change on a national level. It also brings up the idea that Congress needs more diversity from women in different cultural, racial, and religious backgrounds. Although prominent representatives like AOC, Ilhan Omar, and Rashida Tlaib go above and beyond to bring the voices of their communities to light, it shouldn’t end there.

“We don’t solely need Latina women better represented in Congress — we need more than the typical white man who will bring ideas that only cater to their experiences,” Rodriguez said. “We need people from these underrepresented communities to connect them with Congress. To only have one demographic represented isn’t accurate to America.”

AOC’s confidence, dedication, and strong will has changed the game for the House of Representatives and for young Latinas across the nation. She stands for more than her political beliefs, but for a future where Latinas can stand up for their communities on a national level. We can admire her for far more than her commitment to creating change for her community but carrying herself with grace when confronted with aggression. We can admire her for being engaged with us through social media, being true to her beliefs; and most of all, for laying a foundation for future generations to continue a legacy where we confront oppression and injustice.

Editor’s note: Click here to read this piece in Spanish via La DePaulia.

Correction (9/2/2020): A previous version of this story included a headline that featured an incorrect spelling of Alexandria Ocasio-Cortez’s first name. The headline has since been updated to reflect the correct spelling.