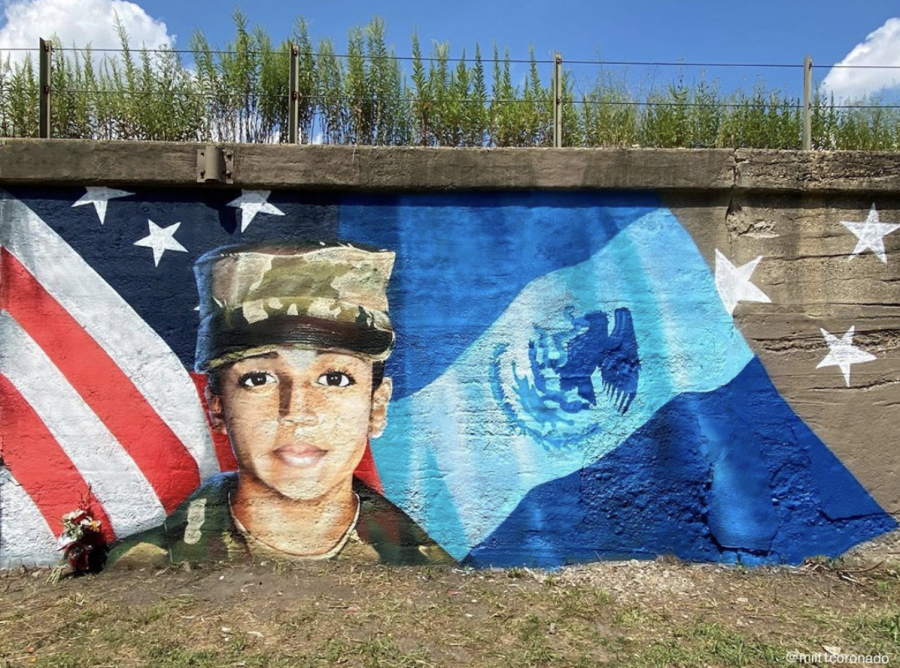 After the national outrage following the disappearance and death of U.S. soldier Vanessa Guillen, artist Milton Coronado commemorates her memory with a mural in Pilsen.

A local Chicano artist is using his passion for aerosol painting to remember the lives of the passing, bringing hope and guidance to the next generation of youth in his community.

Mexican artist and founder of Street Art Ministry, Milton Coronado, 40, began drawing at five years old after the passing of his mother as a form of therapy and picked up aerosol art by airbrushing t-shirts during his adolescence. His aerosol technique soon led him to receive attention from peers and other graffiti artists.

“Spray painting is something that is not taught in school, you learn in the streets by doing it and surrounding yourself with other street aerosol artists,” Coronado said. “By practicing and doing it, you develop a style and a skill, you begin to learn the craft.”

Coronado began to do vandalism shortly after with other taggers at 17 years old, but his life was later rocked after his father was killed by gang members who he knew of. The grieving pain of his father’s death led Coronado to find comfort within his faith and discover his mission of community service. It was his newly discovered passion of serving his community that led Coronado to set a new message and purpose with aerosol art.

“It was four years later where I picked aerosol up again but with the idea and mission to set a precedence for others and to be an example for others,” Coronado said. “That I can use this tool to serve other people through beautifying communities and to bring hope to others.”

With a new vision in mind, Coronado set off on a journey to paint murals of individuals who have passed away in a form to bring hope and healing to families.

“When I painted a portrait of my father who was killed in 2001, I experienced a sense of hope, therapy and joy in doing so,” Coronado said. “I recognized the importance of how this can help others heal, not heal completely but be part of the component of a healing process. I set off with the mission to give back this way.”

Since then, Coronado has used his artwork to not only honor and bring healing to the families of victims of crime like Marlene Ochoa and Vannessa Guillen, but to bring justice to their names as well.

“You feel angry, you feel like there was no justice and you want justice for her,” Coronado said in reference to his recent mural of Vanessa Guillen, an Army soldier who was murdered in a military armory base by another enlisted soldier.

“This story was being silent and we can’t have it be brushed under a rug and forget about it. We need justice for her and the only way we can get justice is by taking action,” Coronado said. “I decided to give back to the family and to the city of Chicago this gift of her so we don’t forget about her, don’t forget her story, and so we can continue to talk about it.”

Coronado said it was his family’s morals and upbringing that demonstrated him the value of serving and honoring others through his craft.

“I was taught that the talent and gifts I have are not solely for me, but they are also to be shared and contributed to my community,” he said. “I have these gifts and abilities not for myself but to give back and serve.”

Once experiencing a troubling past with physical abuse and the death of both parents, Coronado is focusing on working with the next generation of youth to guide them in their walk of life.

“I decided to give primarily more focus to this age group of children, youth and adolescence because we are living in troubling times and they need love, attention, acknowledgment and drive,” Coronado said. “I don’t want a young person to go through what I went through.”

Through his collaboration with non-profit organizations like Gospel Graffiti and his self-led organization Art Street Ministry, Coronado is able to be a youth mentor by leading community-based events like community beautification and murals installation with the youth.

Art Street Ministry combines Coronado’s faith journey and his passion for art to involve the youth in community service work through faith empowerment to spread love and lead others to encounter their very own faith journey.