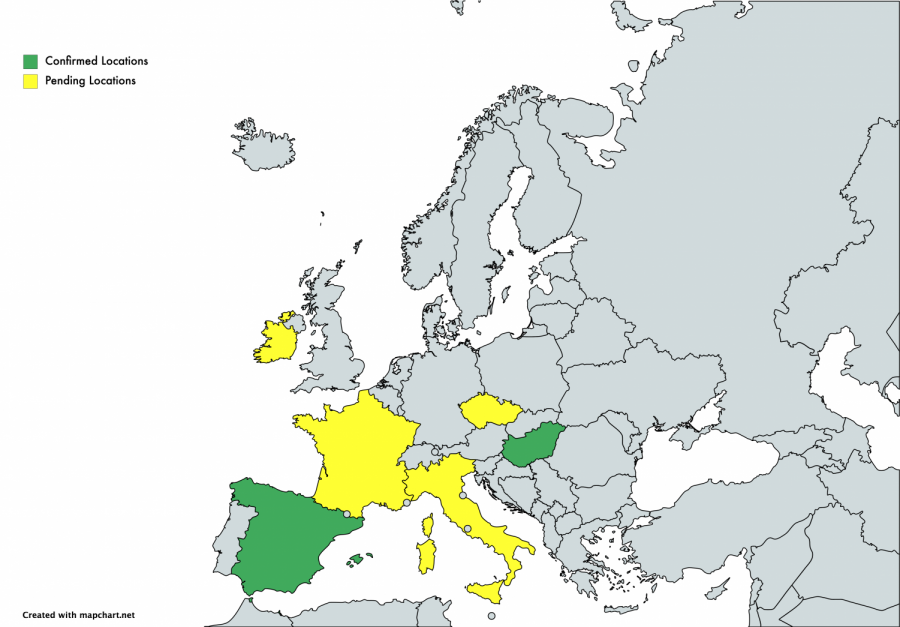 A map of confirmed and pending location available as part of DePaul's Study Abroad program.

Despite travel restrictions brought upon by the COVID-19 pandemic, DePaul University still has plans to facilitate study abroad programs for the upcoming fall quarter.

Approximately 104 students will be enrolled in a variety of different programs, according to Martha McGivern, study abroad director at DePaul. These programs include both in-person travel and remote programming.

Two study abroad programs are officially planned to travel this upcoming quarter, according to McGivern. The locations of these trips are to Budapest, Hungary and Madrid, Spain. McGivern mentioned that three other programs are pending the final approval by the provost as of Aug. 27. These programs would potentially be traveling to Cork, Ireland; Rome, Italy; and Paris, France. The graduate nursing program to the Czech Republic is currently under evaluation to determine the feasibility of travel; however, if determined not possible for travel, the program will adopt a  remote format.

Students that intended to do a study abroad program this quarter but have had their program canceled  have the option to defer to a different term.

“Any student that was accepted into a program that was canceled has the option for automatic acceptance into that same program in a future term the next time it runs,” McGivern said. “If they would like to study in a different study abroad program, they will be prioritized to do that, and hopefully accepted. We just cannot guarantee that if there is a different review process.”

Students are able to keep their study abroad scholarship as long as they participate in the program this academic year.

“Any student that had been offered a scholarship for this academic year, the same scholarship will follow them to whatever future term is,” McGivern said. “The exception is if they were awarded a scholarship this year and would like to defer their program next year, their scholarship isn’t guaranteed because of the way funding cycles work.”

McGivern added that students could take part in an international virtual internship if they are seeking experience through study abroad.

Students can also get a global education through programs run by the International Student and Scholar Services office (ISS). These programs include a wide variety of activities such as exploring new cuisine, a coffee hour, mentorship and an informal place to just connect with students of other backgrounds. Programs are available to both international and domestic students.

“The opportunity to connect with others and share experiences and create a space where all are welcome,” said Associate Director of International Student and Scholar Services Jennie van Drehle.

A highlight of the ISS programming is the Bon Appetit event. This event will occur twice this fall quarter with a focus on Indian and Mexican cuisine, according to van Drehle.

A new program from ISS is the virtual GlobalDePaulTalks, an informal place for people to connect and talk informally, allowing participants to learn more about other students’ cultures and backgrounds.

School of Music professor Cathy Elias has participated in programs in Austria, Hungary, Italy, and Sierra Leone and said such experiences allow individuals to “see themselves in a new way.”

“In a foreign country, students not only see new, beautiful and exciting sights, they also may have to struggle with not speaking the language well, and having to negotiate an unfamiliar environment,” Elias said. “They experience the difficulties of communicating in a foreign language. They learn that in the countries they visit, politics and social structures may be complicated, and simple stereotypical answers are inadequate.”

From Sept. 21 to Oct. 2, students can take part in Global Fall @ DePaul, DePaul’s version of study abroad week which will provide a number of different virtual events.