Universities around the world go back to school amid COVID-19 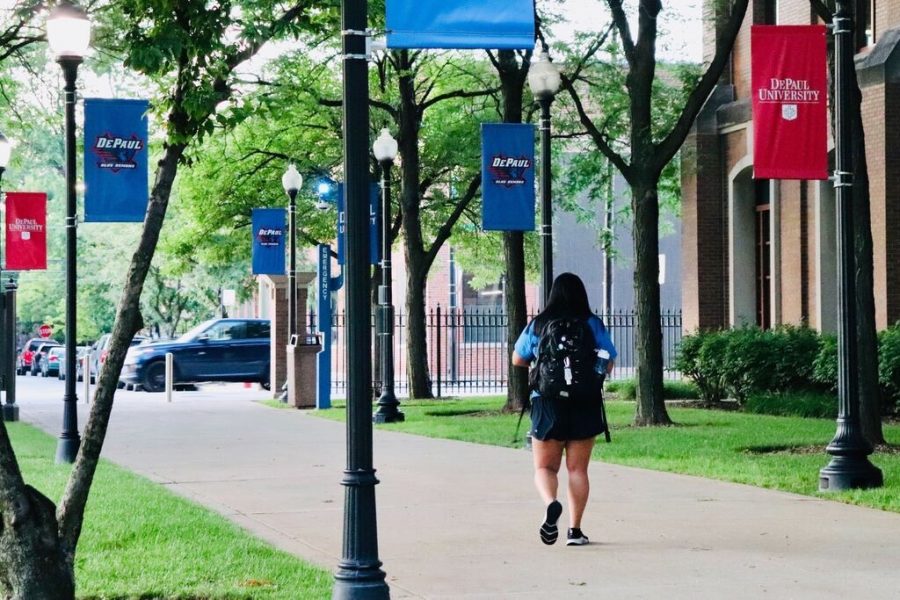 A student walks along the Quad, located in Lincoln Park.

This year back to school takes on a new meaning for college students. Whether it’s logging into Zoom or bracing in-person odds, universities across the country and around the world are continuing to figure out the best plans for the coming term.

“I do not think that there are some schools that are handling it better than others,” said DePaul senior Alex Acain.

Chicago and the rest of Illinois are still seeing upticks in COVID-19 cases. According to WTTW, the city has seen around 300 cases daily, and if that rises to 400, new restrictions could be implemented. However, universities in and around Chicago all have different roadmaps for how they will conduct the upcoming term.

At a town hall meeting on Aug. 20, DePaul announced that 1.6 percent of classes will be conducted on campus and the rest will be online. The university is also freezing tuition. On Aug. 28, Northwestern solidified its plans for fall quarter, less than 10 days before it starts.

According to The Daily Northwestern, the quarter will be fully remote and only junior and senior undergraduates and graduates will be allowed on campus. The university also announced a 10 percent decrease in tuition for undergraduates.

However, the University of Illinois at Chicago (UIC) is welcoming around 1,700 students back to dorms on campus this fall, half of its usual capacity, The Chicago Sun-Times reports. However, anyone living on campus, as well as performing arts students, athletes, and athletic staff will have to be tested weekly.

The saliva-based test began on Aug.10 for faculty and staff and Aug.16 for students at UIC. Even though they aren’t meant for those who are sick, the number of weekly tests would still average around 2,000. A UIC nurse named Joyce Pacubas-LeBlanc died of  COVID-19 on April 23, according to The Chicago Tribune.

Because of student presence on campus, Acain said that student gatherings should be a taste of how universities should proceed with implementing further precautions.

“That should be a call to action for other schools to better be planned and prepared to properly respond,” Acain said.

In Minnesota, the Twin Cities are taking a cautious approach to handling the upcoming term as the state sees a spike in cases. According to WJON News, 1,047 new cases were reported in the state on Sept. 2, with 7 deaths. Hospitalizations were down; however, three more patients were admitted into the intensive care unit.

Officials from Macalester University in St. Paul said the school is planning on having a limited population on campus this fall. On Aug. 21, the university sent a notice to incoming and returning students, saying they will be tested upon arrival and must get a health kit before receiving keys to their dorm. As of Aug. 31, two cases have been confirmed.

The University of Minnesota has also implemented a guide for students who will be living on any of its campuses. Students must follow its Maroon and Sunrise plan, regardless of whether they live in an urban or rural area. Currently, the university is in step one of its plan, where students can’t attend any other residence halls or outside businesses. Two-thirds of classes at UMN Twin Cities are expected to be online.

DePaul junior Megan Stephenson, who is originally from St. Paul, said online learning is the case for most schools where she lives. So when DePaul laid out similar plans, she was disappointed.

“I’m sad about [remote learning] but I understand the reasoning why,” Stephenson said.

Like domestic students, online learning can present its benefits and challenges for students attending institutions outside of their country.

“I guess I could have it worse,” said Chloe Kandel-Wong, a student at McMaster University in Hamilton, Ontario, Canada.

Kandel-Wong is living in New York City with family as her school heads for another term of predominantly online learning. Similarly, McGill University and Concordia University in Montreal will also be mostly remote for the fall, according to CTV news. Like DePaul, these universities will be putting a freeze on their tuition.

According to Canadian college news site University Affairs, international students contribute $22 billion Canadian dollars to Canada’s economy. Pierre Cyr, the vice-president of public affairs at FleishmanHillard High Road, said in an op-ed that if Canada doesn’t solve its current issues with students being able to enter the country and study there, that the economic impact could hurt universities for a long time.

“Thousands of layoffs will soon occur at Canadian colleges and universities, and the impacts on and off campuses throughout the country will be felt for decades to come,” Cyr said.

As border security is currently very tight in Canada, international students are scattered around the world trying to work through their degrees. The country holds 642,000 international students, putting itself in third place globally for foreign student attraction, according to CIC News.

Kandel-Wong said she was lucky this wasn’t the case for her, as she’s still in the same time zone as her university, so not much is different for her, though she said that remote office hours can be difficult to deal with.

Meanwhile, as cases have lowered in New York, schools have been opening, but with high thresholds to meet. According to NBC New York, if a university passes a 5 percent positivity rate, they must close down. This was shifted downwards from 9 percent. The State University of New York College at Oneonta had to shut down two weeks into classes because of parties causing 500 students to test positive for COVID-19, according to The New York Times.

Across the country in California, most schools in the state will be kicking off fall mostly remotely, according to the LA Times. Those who did open are continuing to think over their plans. According to EdSource.org, California State University, Chico, an institution 90 minutes north of Sacramento, had to close dorms a week into the school year. The same source also reported that San Diego State University cancelled its in-person classes, but dorms remain open.

Oxford University in the United Kingdom is getting its COVID-19 vaccinations to trials around the world. This week, they entered the final round of testing for the vaccine in the U.S, according to CBS This Morning.

As the world continues with uncertainty through the pandemic, universities are constantly shifting their plans to accommodate it.