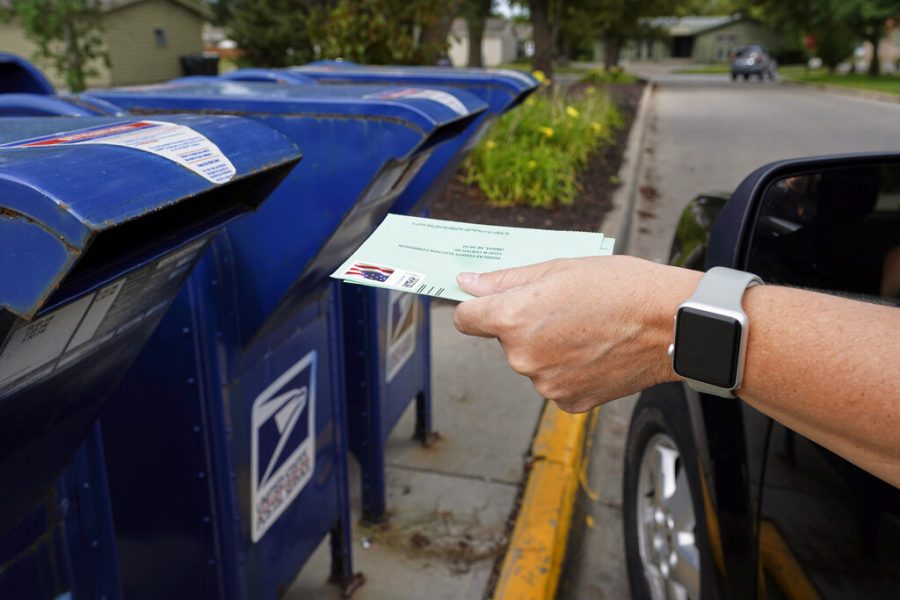 FILE - In this Tuesday, Aug. 18, 2020, file photo, a person drops applications for mail-in-ballots into a mail box in Omaha, Neb. Mail voting is starting in the presidential election as North Carolina is sending out its first batch of ballots. The battleground state on Friday begins to send out about 600,000 ballots to voters who've requested them. Those voters are overwhelmingly Democrats and independents, reflecting a partisan split in voting methods that's developed since President Trump started attacking mail voting in March. (AP Photo/Nati Harnik, File)

The Illinois State Board of Elections is encouraging voters to submit their ballots early to ensure their votes are counted. Ballots will be mailed to applicants beginning Sep. 24, which is also the first day of early voting in Illinois.

In a letter sent to the Board of Elections on July 30, the United States Postal Service warned that state laws concerning voting deadlines are incompatible with their delivery standards.

“As a result, to the extent that the mail is used to transmit ballots to and from voters, there is a significant risk that, at least in certain circumstances, ballots may be requested in a manner that is consistent with your election rules and returned promptly, and yet not be returned in time to be counted,” the letter read.

The Postal Service emphasizes the importance that voters are aware of turnaround on ballots so they send in their ballots accordingly.

“It is particularly important that voters be made aware of the transit times for mail (including mail-in ballots) so that they can make informed decisions about whether and when to (1) request a mail-in ballot, and (2) mail a completed ballot back to election officials,” the letter read.

Matt Dietrich, the spokesperson to the State Board of Elections, said that the board was not surprised by the letter sent by the United States Postal Service. In response, he encourages voters to send in their ballots early to ensure that their vote is counted.

“Even though Illinois allows you to apply up until five days before the election, if you do that, you are taking the chance that the ballot will not reach you before election day or even on election day,” Dietrich said.

President Donald Trump has expressed distrust for the United States Postal Service and has encouraged voters on Twitter to attempt to vote in person after mailing in their ballots.

Wayne Steger, a political science professor at DePaul University, said he fears that people won’t vote because they’ll be unsure if their votes will be counted despite the emphasis on early voting.

“But what research shows is that early voting, extending the voting period, actually reduces voter turnout,” Steger said. “So if mail operates on a similar vein, it could depress voter turnout.”

A graph in FiveThirtyEight shows that voter turnout didn’t spike when Ohio added early voting. Massachusetts is the most recent state to implement early voting in 2016 and also did not see a significant spike. The Illinois State Board of Elections, however, reports that they are on track to hit a record for mail ballots, but have not reported on the track for total voter turnout.

The Illinois State Board of Elections reported that they received 1.32 million vote-by-mail applications as of Sept. 3. The State Board of Elections reports that the number of requests puts Illinois on track to substantially exceed the record set for voting by mail in the 2018 general election when 430,000 votes were cast for mail, accounting for 9.3 percent of all ballots. In the 2016 general election, 370,000 votes were cast by mail.

“We are encouraged by the strong response to the ongoing vote-by-mail effort,” said Steve Sandvoss, executive director of the Illinois State Board of Elections. “Voting by mail provides a safe, secure and convenient voting option for those concerned about COVID-19. It also will help ease congestion at in-person polling places during early voting and on Election Day.”