COLUMN: Change is necessary at DePaul, will DeWayne Peevy deliver? 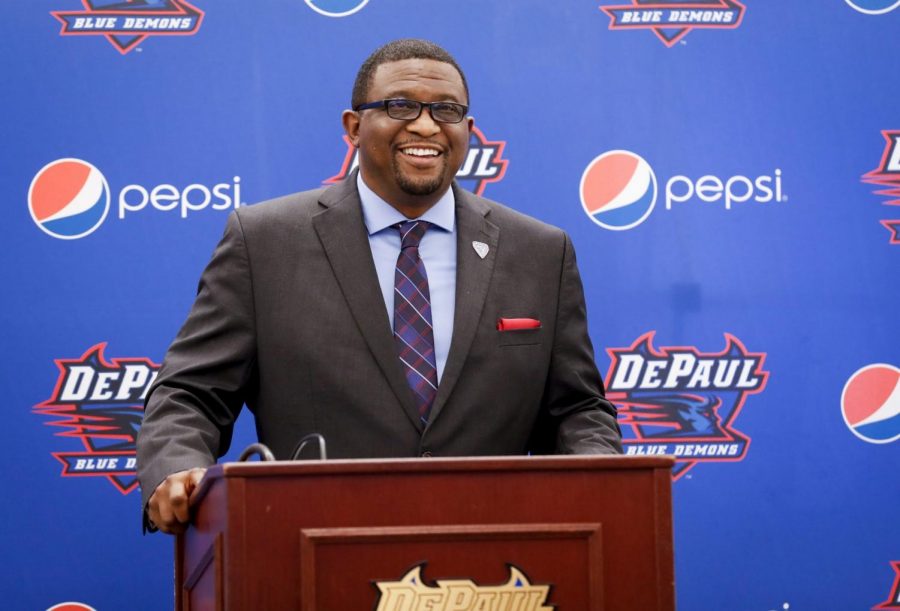 Another summer has come and gone.

But this summer was certainly different than the past ones because of a pandemic that forced people to change how they go about their daily routine.

DePaul was also a casualty to change — one that the university and the athletic department hasn’t experienced in 18 years.

Jean Lenti Ponsetto announced in June that she will be retiring in the summer. Lenti Ponsetto, who was the Blue Demons’ athletic director since 2002, was a mainstay in the athletic department for 45 years.

But on June 5, Lenti Ponsetto announced that she would be retiring, leaving a major gap for the university to fill. In just over two months, DePaul conducted a national search for a new athletic director and on Aug. 24 named DeWayne Peevy as its new AD.

Change was on the horizon for DePaul and change was what they got with the hiring of Peevy, who spent the past 12 years in Kentucky’s athletic department.

In his first press conference on Aug. 25, Peevy spoke on changing the culture in DePaul’s athletic department. He wants to build a winning culture, but he also wants everyone to dream big dreams with him.

“I’m coming here to win a national championship,” Peevy said. “If everybody is not on board with dreaming those dreams, you might not be cut out for the new DePaul athletics.”

Even if Peevy, 47, was not directly calling out anyone, he was sending an indirect message to everyone in the athletic department that some things need to change in order to win.

In terms of the men’s basketball program, Peevy does not want to make a coaching change right now. Instead, he wants to help head coach Dave Leitao bring recruits to Lincoln Park and make DePaul a constant presence in the NCAA Tournament.

“But that’s not something you have to change the coaches to do,” Peevy said. “That’s part of my job, to bring a different level of it. Having a conversation right away with coach Leitao. You know, recruiting is at a higher level. How do we accomplish goals right now — what can we do right now to build a DePaul brand to a point where it’s more attractive to young people?”

It’s important to point out that Leitao is 64-98 in his last five seasons as DePaul’s coach, including four straight last-place finishes in the Big East. Leitao also signed a four-year contract extension back in April.

Peevy, on the other hand, is coming over from a university whose men’s basketball program was competing for national titles. Kentucky, led by head coach John Calipari, has won the Southeastern Conference nine times since 2009 and won the NCAA Tournament title in 2012.

Even if Peevy won’t admit it publicly, there’s currently a major gap between the Blue Demons and the Wildcats. DePaul’s last NCAA Tournament appearance came in 2004, a long time waiting for a program that made the tournament 14 times in 17 years from 1976-92.

How long will Peevy stay patient with Leitao if results don’t turn around?

This is a question that will be answered in the coming months, but an important question that Peevy will need to answer early in his tenure.

Peevy wants the NCAA Tournament not to be the ceiling, but the floor of where the program eventually gets to. But DePaul fans have waited over a decade for the Blue Demons to get back to that point, with patience thrown out of the window along with Lenti Ponsetto.

“There is support and a fan base, and a rabid fan base at that,” Peevy said. “It’s just about getting them to take one little step farther. It might take some belief on the front end. I’m asking today, have faith in us. You’ve waited this long, it’s time to totally put your chips in the middle of the table. Go all-in with us.”

Peevy talked about taking the baton from Lenti Ponsetto and bringing it to the finish line.

He shouldn’t. He needs to change how the athletic department has been operating for nearly the past two decades, or else he runs the risk of not achieving his dreams.

Peevy saw what happened when Kentucky went from Billy Gillispie to Calipari — it was a complete change of fortune for the Wildcats. At DePaul, he needs to be ready to make similar changes if the men’s basketball program continues to underachieve.

“[Bruno is] a different approach because he’s like, well, I’ve got my own challenges and this is what I’m trying to do,” Peevy said. “It’s my job now to figure out how I fit into that because I want to create an environment for him for the second weekend [in the NCAA Tournament], and then how do we get him to that first Final Four.”

A head coaching change is definitely not needed with the women’s team, but it’s fair for Peevy to want to alter some things to reach the Final Four. DePaul has made the NCAA Tournament 18 straight years, but have yet to make one Elite Eight.

Change is sometimes a necessity if the past regime was unable to achieve positive results. Peevy dropped subtle hints of making changes, but it will be his decisions that will speak louder than his words.

In order to make change, sometimes you have to be ruthless. And DePaul could use some of that to go to the next level in all of its sports.

It’s on Peevy now to prove how ruthless he is and wants to be.