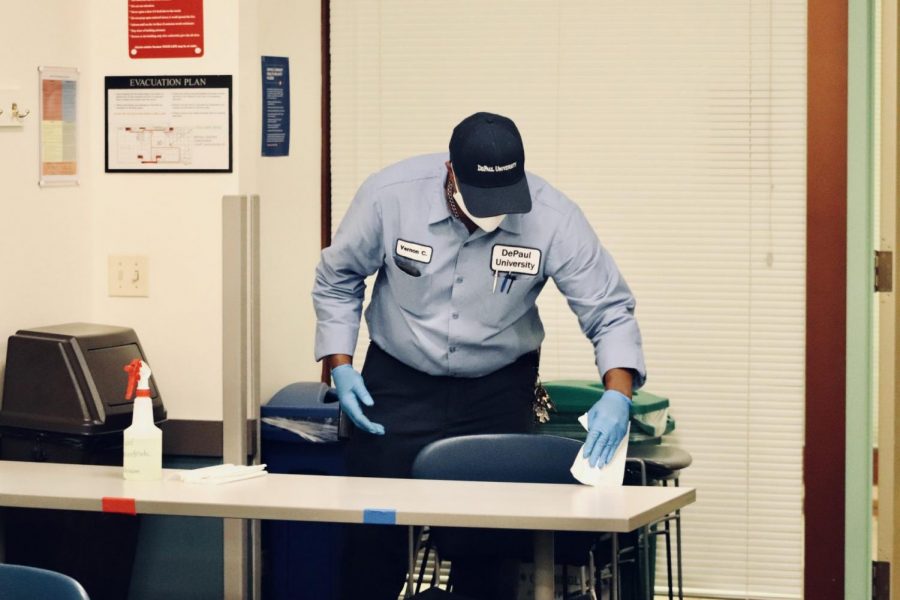 A Facility Operations employee disinfects a classroom as part of new regulations designed to prevent the spread of COVID-19.

When normal activities at DePaul came to a halt in March due to the pandemic, Donna Voight, assistant director of Loop facility operations, made sure her team and the custodial staff did everything they could to keep the campus free of COVID-19.

Fast-forward five months and that work has only ramped up as the pandemic has stretched on and students’ return to campus inched closer. Now, blue signs litter the walls in academic buildings, dining areas and elevators to remind the DePaul community to follow the proper protocols to stay safe.

Hundreds of hand sanitizer stations have been placed across both campuses, disposable masks are available for those without one and custodians have been deep-cleaning nearly non-stop since spring. Seating areas have all been modified to seat only one person to discourage crowding, including in the dining areas and lounges.

While the changes may be hard to adjust to for some, Voight said it’s necessary in order to keep everyone as safe as possible.

“We understand everyone’s desire to be with people again, but if we want to have some sense of normalcy we have to be committed to this,” she said.

DePaul’s Health and Safety plan for students’ return requires face coverings be worn at all times on campus, mandates proper social distancing and encourages good personal hygiene. All members of the university community are also required to complete a 20-minute online training session about the guidelines, whether they intend to return to campus or not.

Nearly a month ago, DePaul announced its revised plan for fall quarter, drastically reducing the amount of in-person classes and closing residence halls for most students with housing accommodations granted on a case-by-case basis.

As of now, no specific cleaning protocols have been released for residence halls but students must abide by the university-wide plan at all times when they aren’t in their own rooms.

Ren Beard, a sophomore in CDM, moved into the University Center in the Loop over the weekend. While capacity has been limited, there’s only so much that can be done to avoid crowding in a downtown residence hall shared with other universities.

“They were saying they would be really cutting down but it’s still a decent amount of people,” she said. “I don’t have a roommate or a suitemate and I have the bathroom to myself, which is a good idea for distancing people, but it’s still pretty packed.”

With that said, staff and students were still taking precautions throughout the move-in process, including limiting the elevator capacity and shutting down certain amenities like water fountains. Like elsewhere on campus, hand sanitizer stations were everywhere, Beard said.

The success or failure of the return to campus will largely depend on individuals’ responses to the rules presented to them.

“I feel like it’s just up to the residents to actually follow it,” Beard said. “If everyone follows the guidelines it shouldn’t be a problem.”

Technology upgrades over the summer equipped many classrooms with the resources necessary to teach in-person and online simultaneously, a format that is increasingly being requested by faculty for the fall, Voight said.

As of Sept. 1, a total of 42 Loop and LPC classrooms will be used this fall, compared to 414 classrooms across both campuses during winter quarter, according to Voight. Additionally, 40 labs will be open for CDM students to use in the Loop.

In addition to both day and evening cleaning and disinfection by custodians, classrooms have been modified to seat fewer students in order to abide by social distancing guidelines with open seats marked off with blue tape. After each class, custodians will disinfect and lock the room and a Public Safety officer will unlock it at the class start time, Voight said.

“If everybody behaves and takes responsibility for themselves and cares about the next person with them, hopefully we stay as healthy a campus as we can,” Voight said.

Other area schools, including Northwestern University, Loyola University, Columbia College Chicago and the University of Illinois at Chicago (UIC), released extensive updates to the overall cleaning process on their designated COVID-19 pages.

While no such plans have been publicly released to the DePaul community, the university is following many of the same methods in order to keep both campuses sanitary, including routine disinfection of high-traffic areas.

“Every day’s a new adventure,” Voight said. “We just have to keep adapting.”