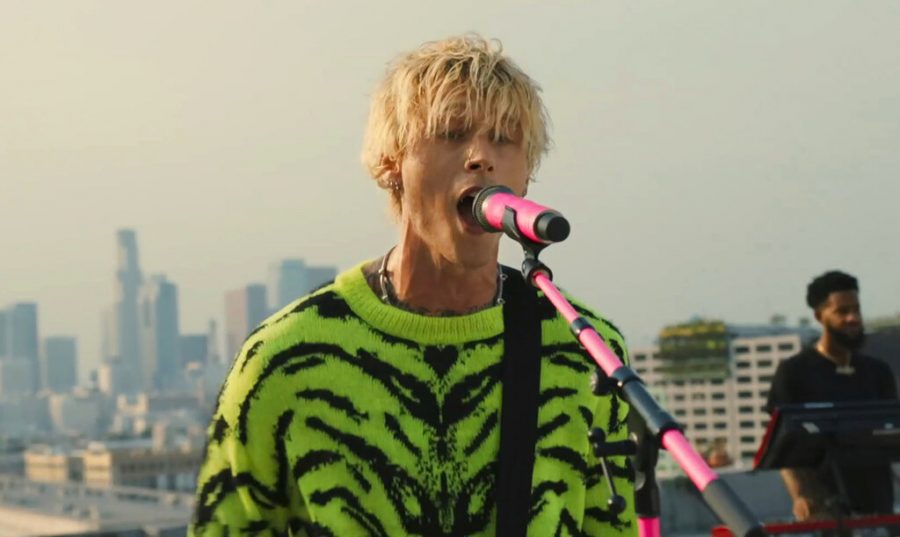 In this video grab issued Sunday, Aug. 30, 2020, by MTV, Machine Gun Kelly performs prior to the start of the MTV Video Music Awards. (MTV via AP)

For the first time in 26 years, Riot Fest won’t be taking over Chicago — but don’t fret. An extra day has been added to next year’s already-stacked edition to make up for it. For now, turn on these tunes, close your eyes and imagine you’re moshing with your friends in Douglas Park.

This has been my song of the summer, and quite possibly song of the year. It has all the makings of an early 2000’s pop punk song, and I’m so here for it. There are layers to why this song is so good, but Travis Barker’s insane drum solo is a big contributor. Machine Gun Kelly is single handedly bringing pop punk back into the mainstream — and I hope that warrants a slot on one of the next waves of lineup announcements.

I’m Not Okay (I Promise) – My Chemical Romance

Perhaps the saddest part of Riot Fest’s cancellation was the fact that My Chemical Romance just made their comeback — with a headlining slot. “I’m Not Okay (I Promise)” describes my feelings towards the whole situation while also allowing me to have mini reunion concerts in my room. It’s one of the most classic songs out of their discography and never gets old.

Okay, hear me out on this one. Simple Plan has a ton of classics in their discography — “I’m Just A Kid” and “Perfect” to name a few — but their rendition of “What’s New Scooby Doo” is top tier. It combines the childhood nostalgia of watching Scooby Doo with that of early 2000’s music, and just makes me want to open up a pit. If we’re being honest, this may be the song I’m most excited for out of their entire set — since I’ve heard they do it without fail at every show.

Surf-punk can be hit or miss for me, but Beach Goons have mastered the niche genre despite being relatively new to the scene. Their EP “Boisad” has no skips, but “Anirak” is undoubtedly my favorite track. They also put on quite the show. Last year I saw them at Concord — as an opening act for an abuse apologist band that will not be named  — and their set was arguably the best. If you’re looking to hold onto the summer as fall grips the city, then this is the band for you.

Jamie All Over – Mayday Parade

It’s been 13 years since it dropped, but “Jamie All Over” still hits hard. It’s Mayday’s most well-known song, and perhaps their best. If you haven’t heard it before, all you really need to know is at the last Mayday show I went to, someone passed out in the pit from moshing too hard. Make of that what you will.