OPINION: The gender binary should go up in flames 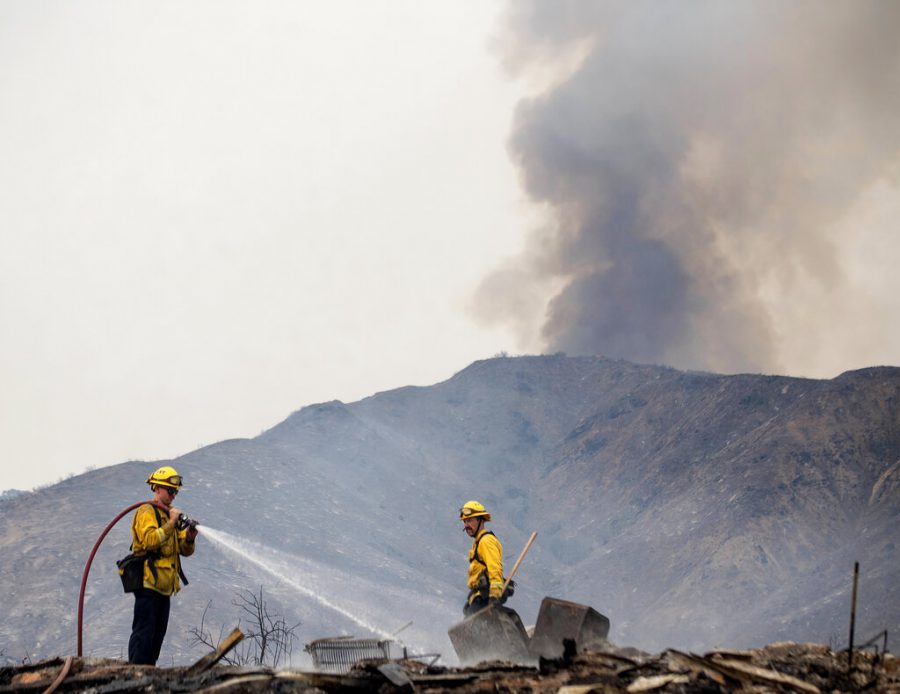 Fountain Valley, Caif., firefighters extinguish hot spots at a structure destroyed by the El Dorado wildfire on Monday, Sept. 7, 2020, near Yucaipa, Calif. A couple's plan to reveal their baby's gender went up not in blue or pink smoke but in flames when the device they used sparked a wildfire east of Los Angeles. The fire started Saturday morning in dry grasses at El Dorado Ranch Park, a rugged natural area in the city of Yucaipa. (Cindy Yamanaka/The Orange County Register/SCNG via AP)

Gender reveal parties are no recent phenomenon. Expecting parents throw parties in which the primary goal is to reveal the sex of their baby — a boy or girl. The first party of its kind consisted of a cake when cut into, was pink inside, indicating a girl. Since then, some reveals have become more intricate, including a gender reveal party in California where a smoking device ignited a massive wildfire.

While intended as a wholesome celebration of life, gender reveals are actually transphobic because they reinforce the gender binary.

According to Dr. Karen Blaire, “the gender binary refers to the notion that gender comes in two distinct flavors: men and women.” She also explains how our society is structured around these two gender roles.

“Much of the world around us is based upon this binary understanding of sex and gender, such as the clothing we buy, barbershops vs. salons, and men’s rooms vs. women’s rooms.”

For much of my life, I also thought that gender was binary. I was told I was born a woman, and while growing up this notion was reinforced in various ways including the clothes I wore and the toys I played with. In fact, if I ever ventured outside of my traditional female role, someone was always quick to criticize me.

I had always questioned my own identity and began to research why I felt the way I did. I soon realized that gender is a spectrum, and I had to redefine what I thought I knew about sex and gender.

First, I dismantled a misconception and understood that sex and gender are not synonymous. According to Dr. Liza Brusman, “sex is our biology — what chromosomes, hormones, genes, sex organs and secondary sex characteristics we have — while gender is how we think of our identity in the context of how norms function in our culture.”

Brusman explains that like gender, sex is also a spectrum.

“Many people’s bodies possess a combination of physical characteristics typically thought of as ‘male’ or ‘female,’” she said.

In school, I was taught that humans inherit XX or XY chromosomes — having XX chromosomes indicates a female and XY indicates a male. But, scientific discoveries prove that the idea of only two sexes is simplistic.

In fact, a person’s anatomical sex may not align with their chromosomes, indicative of intersex traits. Additionally, there are many variations in sex development beyond intersex traits that are indecipherable to the human eye.

Gender reveal parties categorize newborns as either male or female when in reality, sex and gender are not limited to or based on a person’s genitalia. Abiding by the gender binary is harmful because it perpetuates that anyone who identifies as anything besides male or female is different, abnormal and exacerbates discrimination.

The social stigma concerning sex and gender also reinforces the sex binary in the medical field, at times making it more difficult for intersex, nonbinary or trans folks to receive health care. This stigma also carries into discriminatory policymaking which excludes non-cis people from basic rights and privileges.

Society must dismantle the gender binary by recognizing that sex and gender are spectrums with unlimited options. Once I confronted my preconceived ideas about my own gender, I realized that despite my chromosomes, I’m not a woman, I am neither male nor female, I am nonbinary.

Since coming to this realization, I now view gender as something more open and fluid than simply being a man or woman. Dismantling what I thought I knew about my own gender has allowed me to accept my qualities that never fell in my assigned gender role. I no longer view my characteristics as female or not female — I am simply allowed to experience the fluidity of my identity.

At its core, gender reveal parties categorize humans based on their genitalia and as people grow up, they conform to stereotypical masculine or feminine roles. If they adhere outside their assigned gender roles, or as gender non conforming, society tends to view them in a negative light because they’re different. But, being gender non conforming isn’t abnormal, upholding the gender binary is.

Humans constantly dictate their actions according to their assigned gender roles because society rewards people who align their behavior as assigned at birth, and those who don’t are conversely punished.

Ultimately, gender reveal parties are harmful because they reinforce the faulty notion that there are only two genders. The recent California party that ignited a wildfire is the perfect metaphor for why society should abolish the gender binary — while well intended, it inadvertently causes disastrous conditions.