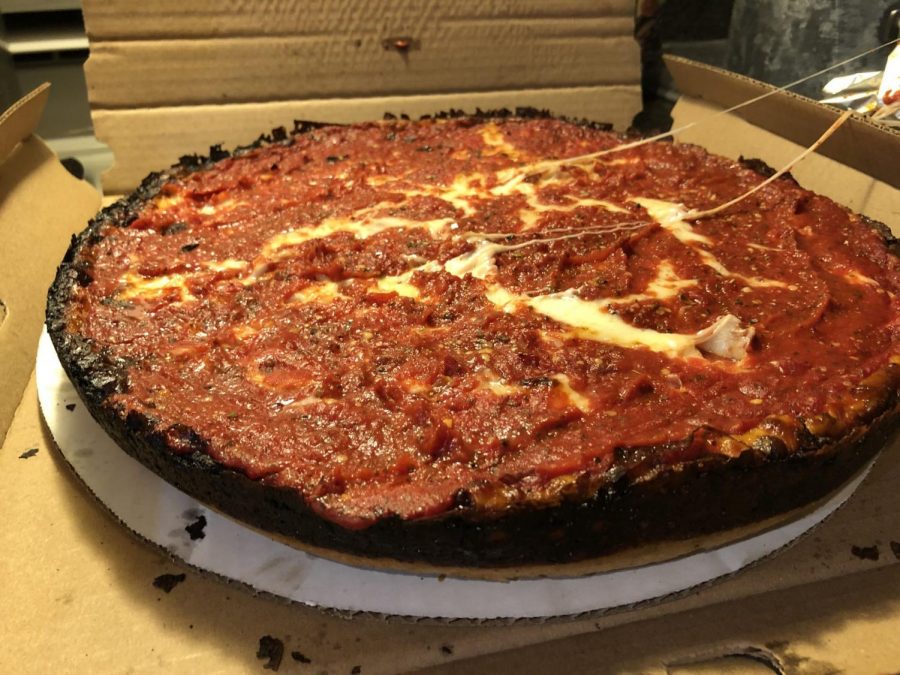 A large cheese pizza uniquely made in a pan from Pequod's Pizza located at 2207 N Clybourn Ave.

Chicago’s food history is as deep and rich as any other city in the United States. Call it the City of Big Appetites if you will, although it sounds kinda corny. Nonetheless, it may just be the truth. There is a deep history of people trying new things in Chicago, people pushing their perceptions of what good or “correct” food can be.

Yet it seems like no matter what when people think of Chicago food, they think of deep-dish pizza. The cover girl of Chicago food, for better or for worse, is the pie to beat all pies. It’s often more famous for the scrutiny it draws from New Yorkers, who are often intent on calling their pizza the true pizza.

Yep, people like Jon Stewart, who, like New York-style pizza itself, have over the years been replaced by something newer, more lovable and better. That’s what makes deep-dish good: it is taboo and different. Yet the pizza history of Chicago covers a much much wider array than just deep-dish.

There are over 100 years worth of pizza history in Chicago. The second wave of Italian immigrants came to the city in the late 1880s, and with them came food. In 1909, Pompei restaurant was founded by Luigi Davino and they began selling thin-crust pizza on where else but Taylor Street, the heart of Chicago’s Little Italy.

Pompei has been family-run ever since and sits at 1531 W Taylor St. still serving all sorts of food. But the first official pizzeria in the city was Granato’s, also on Taylor Street. Instead of sheet-pan pizza that had been popular at Italian bakeries, Granato’s used wood-fired ovens and circular dough baked to perfection.

Post-World War II, soldiers came back from war and businesses began to boom. Bars around the city began serving smaller square slices of pizza as snacks, birthing Tavern-style pizza that is unique to Chicago. This is when pizza actually became popular in Chicago, long after it had initially made waves in New York City. After the end of prohibition and the end of the second World War, pizza had a unique foothold in Chicago.

Taverns didn’t have plates and silverware, so pizza was served on napkins as a way to get people to drink more. This also means that unlike New York City, pizza in Chicago was popularized by people who didn’t specialize in baking, and didn’t have deep roots in Italy. Cheese also mattered more to Chicagoans, in contrast with New Yorkers who were sauce-obsessed.

One of these bars was run by Vincent and Mary Grittani, who began serving pizza at what became Home Run Inn. Through the ‘50s, over a hundred pizzerias were registered in the Chicago phone books.

Little Italy and specifically Taylor Street was the location of a lot of famous pizzerias, including Granato’s. But big change came to the area west of the loop, with huge construction projects including the controversial building of the University of Illinois at Chicago Campus. UIC was built and forced Granato’s to close down, as much of that area was demolished to make room for the campus in the early 1960s.

This idea of making pizza more of a meal than snack probably led to deep-dish pizza. The true originator of deep-dish pizza is disputed, but many believe Pizzeria Uno was the birthplace. It came after Tavern-style pizza, which is the true leader of Chicago cuisine.

My personal favorite deep-dish pizza, Lou Malnati’s, first opened in 1971. The butter crust there is undefeated, and even as they have grown bigger and stretched much further than Chicago, their pizza is always a hit. Also, reheat it in the oven the next day and it’s better than any other kind of reheated pizza.

Pequod’s Pizza is a close second for me. Their pizza is a softer crust for a deep-dish, and hits every time. Their sauce is better than Lou Malnati’s for me as well. Shoot, if deep-dish is good enough for Homer Simpson to choose it over New York pizza, then that’s all I need to hear.