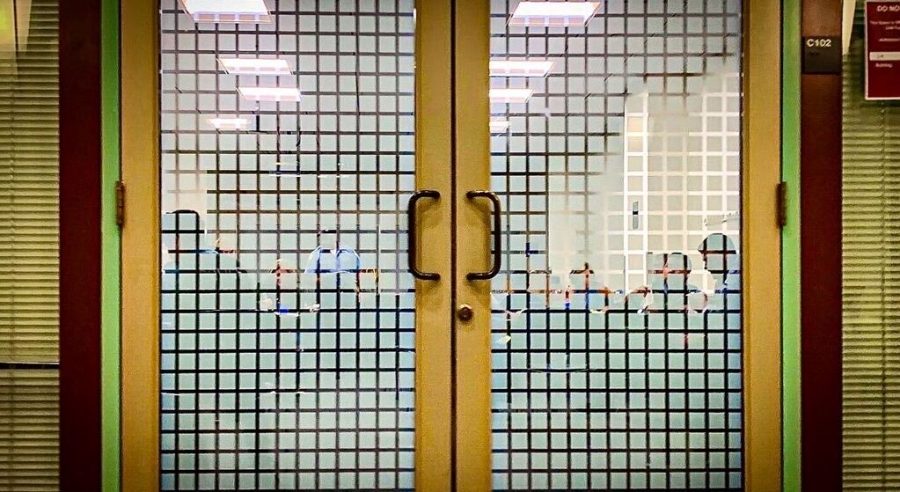 Chicago Police officers held a gathering in the DePaul Center Concourse on Sunday, Sept. 6, with many in attendance not wearing masks.

With six boxes of Giordano’s pizza in tow, Chicago Police Department personnel filed into the DePaul Center Concourse on Sunday, Sept. 6 for what shaped up to be a surprise party.

At first, The DePaulia staff saw small groups of uniformed officers coming down the stairs, mostly unmasked and heading into a recently disinfected classroom set aside for the start of the school year three days later. Soon, another officer carrying two large bags of ice joined them, followed then by even more officers chatting happily as they walked toward their coworkers.

Entering the building earlier that day, Public Safety officers warned DePaulia staff “not to be surprised” if reporters encountered cops while working downstairs. They didn’t specify that there would be more than 10 individuals in a cramped room across the hall from The DePaulia’s office.

A few civilians and their children soon joined them, bringing red star-shaped balloons to accompany the pizza and soft drinks. Before long, a loud “Surprise!” rang out from the classroom as DePaulia staff sat across the hall putting the week’s newspaper together.

The gathering was not illegal. But each aspect of the event explicitly broke the rules DePaul has set forth for its students, faculty and staff to prevent the spread of COVID-19.

Nearly two hours after police first started trickling in, the party ended and everyone involved headed back outside, leaving only piles of ice in the men’s restroom sinks.

The building was officially closed for Labor Day weekend. The DePaulia was required to submit a list of its staffers that would be in its concourse-level office, or staff would not have been allowed in the building. The officers were not required to abide by those rules.

Kristin Mathews, a spokesperson for DePaul, told The DePaulia that the university has a longstanding practice of allowing on-duty police officer patrols to access the lower level of the DePaul Center to “get out of the heat, cold and inclement weather.”

“We have done this as a courtesy and have asked the officers to check in with DePaul Public Safety when they arrive,” Mathews said. “With regards to COVID precautions, we have asked the officers to wear masks, to maintain appropriate social distancing and we supplement our regular cleaning protocols as necessary to ensure that all spaces that are used are rigorously cleaned.”

DePaul’s Health and Safety plan for students’ return requires face coverings be worn at all times on campus and mandates proper social distancing — which was not observed by CPD on the day of the incident. Across campus, blue signs litter the walls in nearly every direction reminding everyone to follow the proper protocols, including at least six in the direct path from the entrance on State Street to the classroom they were occupying — one of which is directly above the hand sanitizer station outside the door of the classroom.

All members of the university community are also required to complete a 20-minute online training session about the guidelines, whether they intend to return to campus or not.

“We understand everyone’s desire to be with people again, but if we want to have some sense of normalcy we have to be committed to this,” said Donna Voight, assistant director of Loop facility operations, previously told The DePaulia.

Mathews added that officers are given access to rooms where no classes are scheduled for the day. The event in question occurred on a Sunday.

Both the university’s public relations team and Public Safety declined to comment further on a number of questions asked by The DePaulia, including whether the university was aware the room would be used for a party breaking city and campus guidelines and if CPD paid to occupy the space. Mathews also declined to comment on whether that classroom was used for social-distance learning the following week, when classes started.

The DePaulia requested comment from Chicago Police spokespeople, who said to refer to the university’s administration. But CPD rules found in the Chicago Police Department’s directives system may indicate the police were breaking their own rules, too.

According to an official directive published by the Chicago Police Department, effective March 11, officers are not to wear official or identifiable police garments while off duty.

“Members will not wear the prescribed star, identification card, cap shield, or any identifiable uniform garment while off duty unless authorized by the Superintendent of Police,” it reads.

In a statement made to WBEZ on June 5, a spokesperson for CPD confirmed that “all on-duty personnel are required to wear Department issued surgical masks and gloves except for when members are inside of a police facility or department vehicle.”

According to the statement, the mandate went into effect May 1 beginning at midnight.

James Esparza is the director of the Chicago Department of Public Health’s COVID-19 hotline. When speaking to The DePaulia about the incident, he specified that those in attendance would have to abide by guidelines set by the university.

“[DePaul] might have created a policy that says, you know, you can have 10 people in a setting without masks,” he said. “That could be something they could have created on their own. And we wouldn’t be able to sort of comment on that.”

Esparza elaborated on general guidelines for the city in regards to gathering.

“If they are [in] a setting where there’s more, you know, a lot of people there, they should be wearing masks,” he said. “They should be, you know, trying to avoid any actual contact with people who are six feet apart as much as possible, which, you know, those are general, basic public health guidelines for coronavirus.”

He later clarified that precautions established by the city’s Department of Public Health function more as guidelines rather than mandated rules. Still, the university says it requires stricter rules than the city for those utilizing its facilities — presumably including police invited to take breaks on campus.

“If everybody behaves and takes responsibility for themselves and cares about the next person with them, hopefully we stay as healthy a campus as we can,” Voight told The DePaulia for a previous story.