The Chicago White Sox taking a free swing at 2020 season 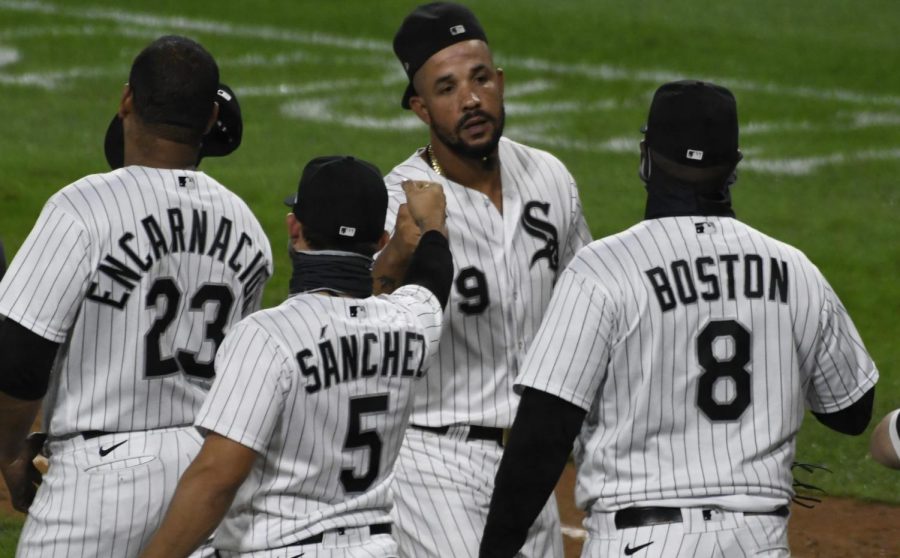 Chicago White Sox first baseman Jose Abreu, center, celebrates with his teammates after they defeated the Detroit Tigers in a baseball game, Saturday, Sept.12, 2020, in Chicago.

The Chicago White Sox entered the 2020 Major League Baseball season in their fourth year of a rebuild but fully aware that their window of contention was upon them. That their young core as well as free agent signings could, at the very least, battle it out for a wild card spot.

With more than half the season over, the White Sox find themselves battling it out for first place in the American League Central alongside the Minnesota Twins and the Cleveland Indians.

With a shortened season and the change in playoff format that meant eight teams from each league would make the postseason, the White Sox had every reason to believe they could compete this season and even make a deep run in the playoffs.

But did anyone expect the team to be where they are right now?

“Multiple projection systems (PECOTA, ZiPS) had the White Sox as a 83 to 85 win team in 2020. In a shortened 60-game season, that’s 31 to 32 wins. For a franchise that had seven straight losing seasons, it was a much welcomed projections as there would be multiple new faces joining the team,” said Josh Nelson, writer and host of the Sox Machine podcast. “They have been exceeding expectations in 2020 in large part to a deep lineup, a solid bullpen and the duo of Lucas Giolito and Dallas Keuchel leading the rotation.”

Keuchel, alongside catcher Yasmani Grandal, were the two marquee free agent signings for the Sox. Their veteran presence has provided a good mix to the young core especially during the early part of the season where the team was struggling.

It was during a stretch where the Sox had lost four out of five games and the former Astros pitcher called out the team saying some of the players were “going through the motions.” To their credit, the team took heed of his words one can point to that as a turning point.

A key for the Sox’s success so far has been their offense. They rank in the top three in multiple offensive categories including topping the American League in slugging, home runs, and on-base plus slugging. They rank third in on-base percentage and second in runs. They are getting contributions up and down the line-up especially with rookie sensation Luis Robert.

“Many wondered if he [Robert] would struggle facing major league caliber pitching for the first time, but Robert is making it look easy,” said Nelson. “Not only should he be considered to be the American League Rookie of the Year, but should also be a serious MVP candidate. In a full 162-game season, the ebbs and flows would be more frequent for Robert. But there aren’t enough games in 2020 for him to experience a lengthy slump. That’s a good thing, and could be helping build confidence for a player who has an incredibly high ceiling.”

Relying on prospects can be a gamble. Regardless of how high they were drafted or their potential, a prospect is equally as likely to fail or succeed. But the White Sox have amassed many high-quality prospects and it is now paying dividends. Having a deep roster is important especially in a shortened season where every game matters.

“One major benefit is the amount of depth the organization has across its 60-man player pool, which has helped the team battle through a plethora of injuries,” said Mike Rankin, editor-in-chief of the blog Future Sox.

Some of the injuries the Sox have had to deal with were with starting pitchers Carlos Rodon and Aaron Bummer as well as Yoan Moncada who was diagnosed with COVID-19. The team is likely to pay special attention to his situation because despite being back with the team, Moncada has stated that his body hasn’t been the same since recovering and that it’s a “daily battle to try to find that energy to go through the day.”

The trading deadline came and went with the White Sox standing pat. The only move they made was prior to the deadline when they acquired Jarrod Dyson from the Pittsburgh Pirates.

“I was very happy to see the White Sox stand pat at the deadline. The higher cost names such as Lance Lynn, Brandon Woodruff and Mike Clevinger were too rich for the Sox liking because it’s unwise, in my opinion, to trade a [Andrew] Vaughn, [MIchael] Kopech or [Dane] Dunning at this point in the organization’s development,” said Rankin. “There’s too much risk of compromising upcoming years of expected contention by trading away top prospects as a result of this year’s deadline.”

General manager Rick Hahn said that one of the reasons they decided not to make a move was because they did not want to do anything that was going to compromise what they are excited about.

If there was an area the Sox could have used help in was in starting pitching. Lucas Giolito, who threw a no-hitter against the Pirates, and Keuchel are clearly the two best starters. After them they had Gio Gonzalez penciled in but he’s out injured, Reynaldo Lopez has struggled,was sent down to Schaumburg, though was since brought back and Dylan Cease is still a work-in-progress.

The good news is that the one-two punch of Giolito and Keuchel may be enough in the early rounds of the postseason.

If there is anything that can rain on the White Sox parade is that their fans cannot be there at Guaranteed Rate Field. Even some of them did not anticipate the team being this good this season.

“On paper they were good but that usually never translates to wins, especially with young players,” said White Sox fan Francisco Zamudio. “I thought they’d be good but not first place good.”

What makes this season that much more special is the fact that the team is doing so well with homegrown players. It is a reward for all those years of losing baseball.

“There is a sense of accomplishment that this is happening with the team and farm system,” said Zamudio. Those tough seasons seem to be paying off. It doesn’t feel cheap like a Yankees team with the highest salary would.”

There is plenty to like from this Sox team. The young guys like Tim Anderson and the emerging Eloy Jimenez bring a certain swagger to this team where they feel like they can beat anyone or come back in any game. Couple that with a Jose Abreu who is the elder statesman and a decent bullpen, the Sox have a shot at the pennant.

Every team in the majors could use more starting pitching. The White Sox have one of the best one-two punches in baseball. They have more than offense to bail out any of their pitchers.

With only a handful of games left in the season, the team currently sits alone first place. It’s a tight race in the AL Central but barring a collapse, there will be postseason baseball on the south side of Chicago.