Cultural institutions across Chicago see effects of the pandemic 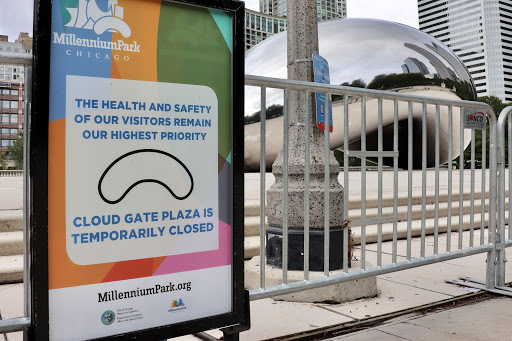 The Bean, located in Millennium Park, closed to prevent the spread of Covid-19.

Since Covid-19 forced varying degrees of lockdown and travel restrictions around the globe, the streets of Chicago have been empty without tourists filling iconic spots.

Prior to the halt of normalcy imposed by the pandemic, Illinois tourism saw its ninth consecutive year of record-breaking numbers — 117 million visitors in 2018 and 120 million in 2019 respectively.
Although Chicago’s role in growth was not accounted for in the 2019 numbers presented by the Illinois Office of Tourism Department of Commerce and Economic Opportunity, the city set its own visitor record in 2018, bringing in 58 million tourists.

A big part of the city’s appeal is the number of iconic spots that tourists flock to, many of which remain closed to curb the spread of the pandemic.

Associate professor and academic director of the PRAD Graduate Program Matt Ragas said these cultural institutions around the city are part of “the heartbeat of Chicago.”

Even though these locations are so integral to the city’s economy, many are struggling to adapt to post-shutdown procedures.

“The larger cultural institutions in town are also having to resort to layoffs in some cases, but generally have the endowments and donors where their long term health and sustainability is not at risk,” Ragas said. “It’s the smaller cultural institutions, outside of the Loop and in the neighborhoods, that tend not to have the same level of financial support and reserve funds.”

Despite some of these institutions reopening as quarantine restrictions eased citywide, the lasting effects of closures are seen through new guidelines and budget shortfalls.

Since the Field Museum reopened to the public on July 24, many guidelines have been established to protect patrons and employees — including plexiglass barriers, limited capacity and required face coverings.

“Typically before Covid, we had three entrances. Now, we are down to just one entrance at this point,” Guest Relations Manager Jacob Schuler said. “So, everybody’s entering through the east entrance which is also our accessible entrance.”

In addition to these protocols, the museum added automatic sanitizers throughout the building.

“We have automatic hand sanitizers throughout the building at almost every turn. We are asking our visitors to self sanitize as much as possible,” Schuler said.

Although the Field Museum has been able to operate, attendance has gone down due to the restrictions on international travel and capacity limits.

“We’ve definitely seen a good attendance, especially because during the summer our attendance would typically be driven by international visitation, which obviously is not happening,” Schuler said. “So attendance has been, you know, considerably soft versus last year but at the same time, it’s created a really great opportunity for those visitors to come to feel safe right now.”

The Field Museum engaged with patrons with online content, including a new instant chat with Maximo the Titanosaur.

The Shedd Aquarium has introduced similar measures for protection. Johnny Ford, assistant director of public relations, said “strict guidelines” to protect patrons and employees have been implemented after the facility’s July 3 re-opening, including a 25 percent decrease in the building’s capacity.

“The closure and a lower building capacity cut directly into our attendance revenue, which fuels 70 percent of our annual operations budget,” Ford said. “This has resulted in what we expect to be a $23 million budget shortfall this year.”

Ford said the budget shortfall resulted in “several layoffs and furloughed staff” when the aquarium was closed.

“We have since been able to welcome several of those staff back from furlough after reopening,” Ford said. “We’re also heavily focused on creating some new virtual programs that can engage guests from home and around the world to help support our revenue losses.”

“I think Chicago is probably unlike most major cities in the United States,” Thomas said. “Hospitality and tourism is a massive driver of revenue for our economy, whether it’s taxes that are generated from that; whether it’s tourists coming in to spend money; whether it’s for business or leisure travel; those numbers have significantly declined.”

Popular events like Lollapalooza, Chicago Marathon and concerts have impacted the tourism aspect of the city’s economy as well because of statewide restrictions of large gatherings.

“People aren’t coming to the city for those big events, so sure Navy Pier with the Art Institute, those are really big draws — but where we’ve really seen the biggest impact was meeting in events because if people aren’t coming to the city for meeting and events and staying in the hotels, they’re not eating in the restaurants; they’re not shopping on Michigan Avenue,” Thomas said.

The effect goes beyond events, but to how businesses will have to adjust their staffing.

“When those businesses are seeing a major decline in business, in some cases that means that they have to furlough staff, they just have to close their doors and lay off their staff,” Thomas said. “It’s not just the revenue that they would be making, but then it’s the people that had to get laid off as well but then aren’t in turn, spending money.”

Ragas said some businesses have been able to recover more smoothly than others.

“That has been an uneven economic recovery so far,” Ragas said. “Big institutions have generally been able to pivot more successfully and adapt, whereas smaller institutions, whether small businesses or non profit organizations, have seemingly struggled more. We must step up and support them.”

Thomas said the effect of the pandemic has affected all areas of life. He adds that Covid-19 will impact everywhere, not just the tourism industry.

Correction (10/5/2020): A previous version of this story listed Matt Ragas as a professor. The story has since been updated to reflect the correct title of associate professor.