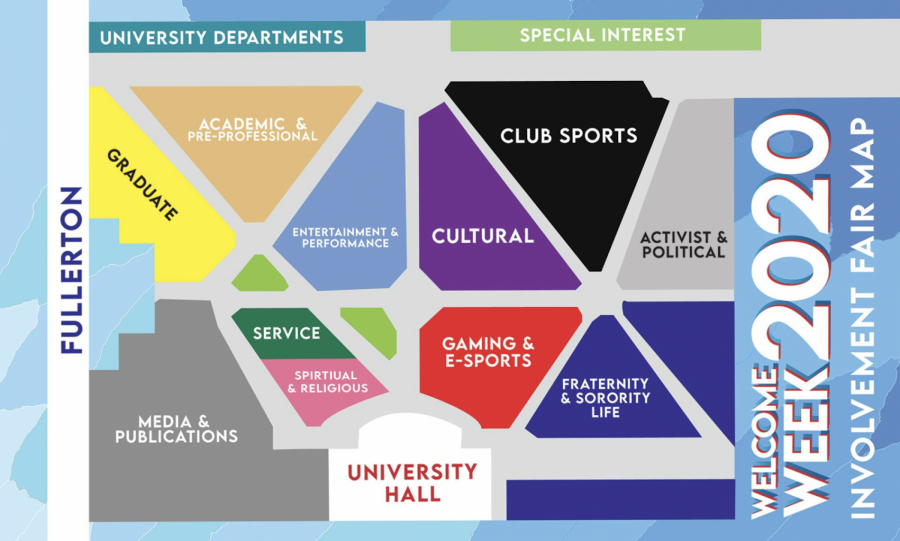 The virtual map of DePaul’s quad, the usual location for the annual Involvement Fair.

One of the most important days for any DePaul organization is the Involvement Fair. Usually filled with free swag and food along with new friends, the Involvement Fair had to be reimagined this year in light of the Covid-19 pandemic. This is normally the day clubs and organizations set up booths to talk to students about their groups in an attempt to recruit new members. It is also a chance for new students to acclimate to the culture of the university and make friends. This year, since the fair and club meetings can’t happen in person, the DePaul eboard and the clubs had to get creative.

Similar to how other events have gone virtual this quarter, DeHUB, DePaul’s platform for student engagement, was the setting of the fair. A virtual Quad was designed, split into different categories of clubs and organizations for students to look through.

The online format still involved interactive features. If a student was interested in a club, they could click on the virtual “booth” to get more information, then talk to current members through either a chat function or zoom meeting. This way, it was more engaging than looking through a list of clubs and organizations. Students were able to connect with current members through this format.

This strange new setup isn’t deterring clubs and students from finding each other, though. Elizabeth Mantha of DePaul Women’s Club Basketball said it was definitely an adjustment switching to an online platform this year, and their main concern going into it was portraying themselves through a computer screen rather than in person, but in the end it worked out pretty well.

“The e-board has really impressed with how well the virtual fair was put together,” Mantha said.“Between the online chat and the virtual Zoom, we are still able to recruit a good number of girls.”

As a sports club, though, Mantha said the Involvement Fair isn’t the only place they have to make drastic changes. Although plans are still up in the air for the future, they have opportunities to engage with each other.

“Our season doesn’t officially start until January, so we haven’t discussed too in-depth on what our meetings will be like,” Mantha said. “However, we have discussed trying to find fun virtual team bonding activities to meet all the new girls and stay in touch with past players.”

In contrast, not all clubs see the transition to online as much of an adjustment. Some clubs have a flexible platform that functions well  both in person and online. DePaul Reads, a fairly new book club that began last winter, doesn’t see moving recruitment or meetings completely online as too much of a loss.

“If anything, I’m hoping the switch helps us grow as a club with everyone looking for new ways to come together and make friends or spend time together,” said DePaul Reads President Savannah Greer. “As a book club, most of our ‘activity’ happens on our own and we only meet once a month to discuss the book we read.”

1,217 people visited the Involvement Fair this year and there were a total of 5,243 booth visits. Teneshia Arnold, the assistant director of programming at the Office of Student Involvement, said in a previous DePaulia article that the past average number of organizations to register is 150. This year, there were 151.

“We’ve had students share how they appreciate us still being able to put together some virtual offerings as quickly as we did,” Arnold said. “Another portion of the feedback that we got back was that students appreciate us providing some sense of normalcy for them.”

Social media is a big asset to clubs connecting to prospective club members. All clubs and sports will be communicating through social media about updates regarding remote meetings.

For example, Her Campus DePaul has been updating about their remote club meetings through Twitter.

Despite any challenges presented by an online format, student involvement is still crucial to the DePaul experience.