OPINION: The term ‘sus’ is rooted in homophobia 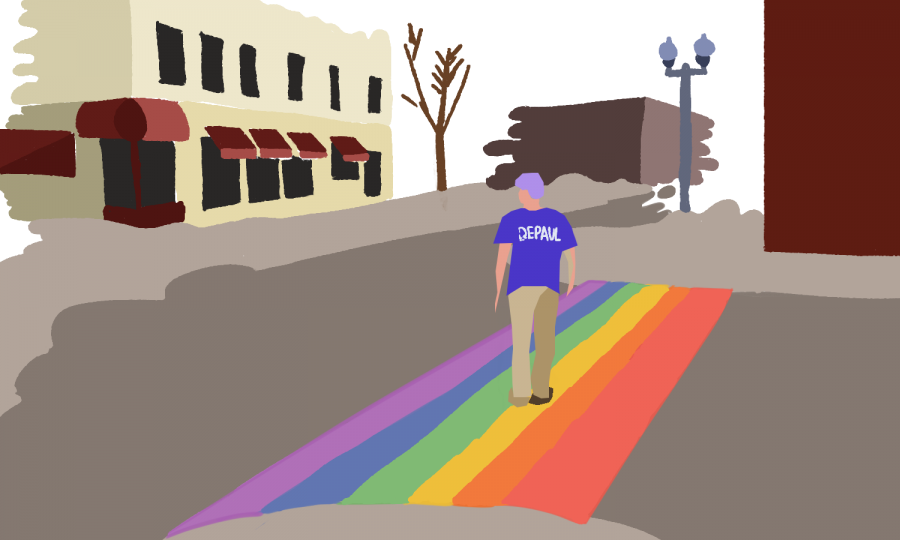 “Sus” jokes are taking over social media — from TikTok to Twitter — spreading an anti-homosexual message that discourages straight men from acting in a feminine or stereotypically homosexual manner. The idea behind the joke typically goes like this: a man displays a flamboyant demeanor, to depict himself as homosexual or feminine, while people flood the comments calling the man “sus” or suspect of being gay.

As a cisgendered, bisexual woman herself, Corbin believes that “it shouldn’t be ‘sus’ for a man to act feminine. We are learning more and more that it is okay for men to act feminine and for women to act masculine and vice versa.”

As the long and still ongoingbattle for LGBTQ+ equality has proven, there is a deep societal and cultural emphasis on femininity and masculinity in relation to sex. DePaul’s director of LGBTQ+ Studies, Barrie Jean Borich, said that “the dominant culture is still focused on the fixed ideas of sex.”

In her LGBTQ+ memoir course, Borich and her students worked collaboratively to develop a list that compiles the “Elements of LGBTQ Memoirs.” One of these elements is that, “Heteronormative and cis-normative expectations regarding sexuality and gender are enforced in myriad and often invisible ways.” The lack of acknowledgement and discouragement of “sus” jokes is what keeps the heteronormativity and cis-normativity invisible, affecting people in a way that negatively impacts the progression of sexuality equality and discourages self-acceptance.

Since I was a child, the replacement of negative adjectives with sexual orientation has influenced the vernacular around me. The saying “that’s gay” was one of the first examples of this type of homophobic speech I encountered at a young age. Using “gay” to depict something negative may seem like a minor issue, but it’s much more harmful than many choose to realize. As a closeted young man, this was the type of speech that made me fearful of embracing my true self and accepting my sexuality. This type of speech minimizes the gay experience by disregarding it altogether and stamps negativity on homosexuality. “Sus” is a rebranded “that’s gay,” which makes me wonder, why must people constantly feel the need to demand heteronormativity and cis-normativity?

DePaul junior Julia Conturso identifies as lesbian and dealt with the same heteronormative, cis-normative speech as a child. Wanting to put an end to the term “that’s gay,” Conturso recalled “When I was in eighth grade, I made a video PSA to my class to discourage the use of the term ‘that’s gay.’ I had classmates, that agreed to do the video, choose a negative word that could be used in placement of  the ‘gay’ in ‘that’s gay.’”  If Conturso, in eighth grade, could recognize the harmfulness of this type of speech, you should be able to as well.

The issue here is that the intent behind these “sus” jokes is homophobic, whether it seems largely homophobic to you or not. To discourage homosexuality is to promote homophobia and to demand heteronormativity and cis-normativity is to discourage true self-acceptance. Be the change and help educate those that find these types of jokes to be humorous.