REVIEW: ‘The Trial of the Chicago 7’ is an uninspired— but important— retelling 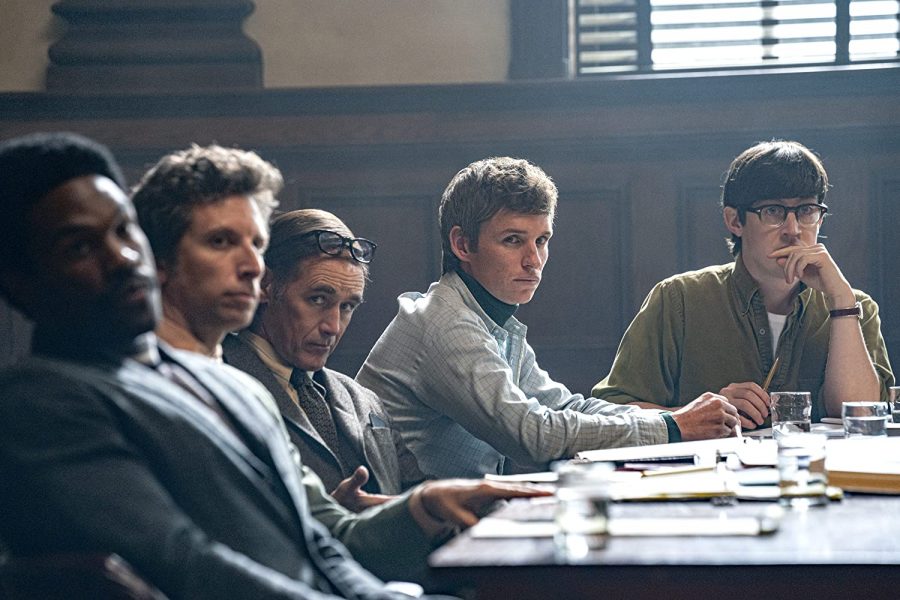 Still from "The Trial of the Chicago 7," written and directed by Aaron Sorkin.

In the summer of 1968, a large anti-war protest was held near the ongoing Democratic National Convention in downtown Chicago. Over the course of five days and five nights, these protesters clashed with the Chicago police in what would turn out to be a legendary display of police brutality on a massive scale. The following spring, the grand jury indicted seven men (which initially started out as eight) on charges of conspiracy to incite a riot. Those eight men were Abbie Hoffman, Jerry Rubin, David Dellinger, Tom Hayden, Rennie Davis, John Froines and Lee Weiner.

This event and its massive impact on American politics later went on to be known as “The Trial of the Chicago 7” and it is now the subject of the latest picture from massively renowned screenwriter/director Aaron Sorkin.

Sorkin, who is most known for writing his snappy portrayal of the inner workings of the Oval Office in “The West Wing” and his numerous cinematic dramatizations of real life such as “The Social Network” and “Steve Jobs” made the middling jump to behind the camera with 2017’s “Molly’s Game.”

With “The Trial of the Chicago 7,” he goes for something far more ambitious with a stacked cast to boot. Sorkin’s dialogue isn’t as showy as it usually is here. It doesn’t have the theatrical crackle from his other works and it’s for the better in this case — it seems like Sorkin knows he doesn’t have to overly try in order to make this content gripping.

Not to mention, the actors here across the board are truly impressive in their performances. Sacha Baron Cohen has been getting tons of press for his dramatic turn as Hoffman. However, it cannot overshadow the gobsmackingly tremendous work Mark Rylance hands in as the Seven’s defense attorney William Kunstler and the minor but show-stopping performance Yahya Abdul-Mateen II gives as Black Panther leader Bobby Seale.

All of the groundwork is there for something that should be an unforgettable tour-de-force, and while Sorkin’s directing here is quite an improvement from whatever happened with “Molly’s Game,” he manages to render “The Trial of the Chicago 7” a mere wax museum-portrayal of what actually happened.

From someone who has been so prolific as a screenwriter for some of Hollywood’s top filmmaking talent, you’d think Sorkin would have a more keen eye behind the camera, but so many of his directorial decisions reek of un-inspiration. He relies heavily on overbearing didacticism in place of genuine nuance.

Sorkin also restricts his narrative to the courtroom to show off his great dialogue, which ends up being a detriment to the true-to-life story. He’s not able to capture the true rebelistic idealism of the time because he cuts down so much of the meatier moments like the actual riots themselves and the build-up to frenetic montages.

This all comes together in a climactic final moment in the courtroom that is so embarrassingly kitschy, you wouldn’t believe it came from a film that wasn’t made in the early ‘90s. It’s all just a little too clean and nice around the edges for something of this nature. It lacks the bite or grit that plenty of other filmmakers (filmmakers with whom  Sorkin has worked with in the past) could have easily brought to the table.

All this being said however, I think it’s a good thing this film is released right now (and on such a wide platform as Netflix on Oct. 16) and while it may not check the lists of this writer, it stands as an important piece of film for our time. It shows a rebellious nature that democracy desperately needs right now and gives at the very least a half-honest portrayal of the police state we all really live in. I can’t give Sorkin much credit for this film but I can at least give him that many people will learn from his film.