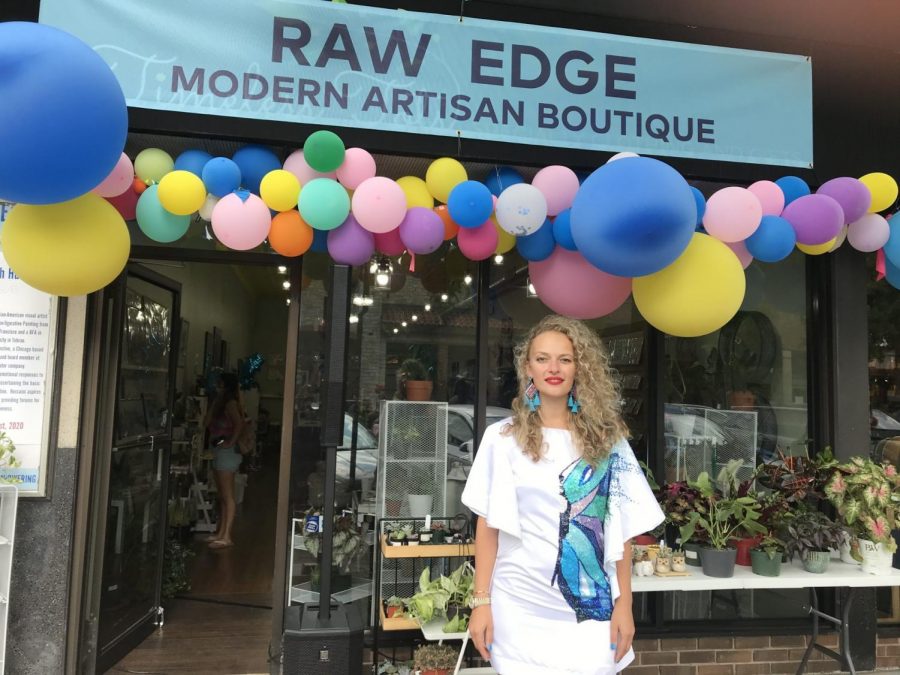 Maria Belokurova standing infront of her business Raw Edge which opened up this summer in Lincoln Square.

Maria Belokurova never dreamed she would be opening up her new store, Raw Edge, during a global pandemic. Sandwiched in between Barba Yianni’s Greek Restaurant and The Cask Wine Tasting room in Lincoln Square, Raw Edge is an artisan boutique that sells designs and products made by local and international artists.

When the coronavirus pandemic surged and more businesses shut down, Belokurova noticed how deeply affected artists would be when art fairs across the country would begin canceling their shows.

Her idea for Raw Edge came from her desire to help other artists showcase their products in a collaborative environment. Originally from a small town in Kasatar in Russia, just above China and close to Siberia, Belokurova came to the U.S. with no cell phone and only a few dollars in her pocket.

After quitting her job in 2019 as a visual merchandiser for Neiman Marcus, she decided to sell her own jewelry line which focuses on using discarded leather scraps to design earrings along with other uniquely crafted jewelry pieces.

With a natural drive and curiosity to explore possibilities outside of her comfort zone the idea for Raw Edge was born. After suffering some rejection from other artists not willing to support her idea during the pandamic, Belokurova decided to take the risk and open anyway.

As she began looking for a place to rent with no prior experience in owning a business, she inquired with a Lincoln Square landlord who owned several rental properties, to no avail.

“He told me no at first. In this area, landlords want established businesses that have established financials,” Belokurova said.

A highly sought-after area, Lincoln Square’s shop owners pay anywhere from $3,000 to $25,000 a month in rent – the same neighborhood where Angelina Jolie brought daughter Zahar shopping at a local toy shop in 2007 and billionaire Marcus Lemonis from the Profit opened Uncle Dan’s a sporting goods shop.

As Covid-19 cases began to rise and businesses were forced to close their doors the renter who acquired the space Belokurova wanted decided to back out.

“The landlord called me and said he would offer me a six-month trial lease. I jumped on it,” Belokurova said.

With a rare opportunity and 19 artists counting on her, Belokurova’s anxiety grew as uncertainty loomed. She watched the daily news, unable to predict if new regulations would enforce a city-wide lockdown.

Mary Arroyo-Ortiz, an abstract painter from Chicago, also feeling the uncertainty and disappointment of Co-vid 19, after seeing her sales slow and several of the art fairs she’d been accepted into cancel, decided to contract with Belokurova.

“All of my art was just sitting at home. Maria is helping so many of us,”Ortiz said.

An experienced professional, Ortiz  felt Belokurova’s vision was right on target. “Once you believe in something, and do it in good faith, good things come,” she said.

Now with 19 local and international artists on board and everyone splitting the rent, along with donating a percentage of their sales to a charity of their choosing, a small community  has begun to shape itself in the midst of a global crisis.

Now, with an opportunity to grow her business model and establish a presence in a highly competitive neighborhood, several people warned Belokurova that she might be making a mistake during such an unpredictable time.

“But if I fail, I’ve still learned something,” she said.

“Opening any business at any time is a risk, but when you do something risky you stand out,” Cox said.

With a mindset that embraces change, and over 20 years of business experience, Cox sees the opportunity for growth coming from an attitude that stays focused on the positive.

Rudy Flores, the executive director of Lincoln Square Chamber of Commerce said that Raw Edge isn’t the first business in Lincoln Square to open during the pandemic, but is among six other businesses that have decided to forge ahead.

“It’s exciting to see some new life, especially when the media tends to only highlight the businesses that are failing, ” said Flores.

The chamber, a membership-driven organization that also has contracts with the city, works in the capacity of helping local businesses navigate city hall. However, they have suspended dues during the pandemic and opened their door to any community business.

“It’s emotional for us because we know these businesses so well,” Flores said. “We’ve grown with them. We felt it was important to assist them in any way we can.”

To help businesses better understand the ever-changing restrictions of state and federal imposed mandates due to the pandemic, Flores and his team have learned how to disseminate the new information to help business owners feel less confused.

“We have a liaison that we work with at the hyper-local level that has helped us navigate new processes and city ordinances to help these small businesses,” Flores said.

With information on city ordinances changing every few weeks, it has become increasingly difficult for businesses to keep up with the information and how to properly apply it to their specific business model. Different laws apply for each sector some of which include  restaurants, retail, health clubs, grocery stores, medical facilities, salons, airports, parks,  and schools.

“Our city being a dense large city is going to have more stringent laws because of the population density,” Flores said.

In a blog post written by business owner Andy Holck titled Observations, Holck urges business owners to adapt quickly if they want to survive, and create new ways to grow. Emphasizing the importance of flexibility and acceptance when it comes to traditions and practices changing.

“With this acceptance will come a cycle of change, creating new patterns. Going back to how things were is not entirely possible, no matter how much we want it to be,” Holck said.

With that in mind, Flores has witnessed most local businesses in the area make significant changes in how they sell and market their products in an effort to generate revenue during the pandemic.

“A lot of small business owners don’t even have websites because they rely so heavily on walk-ins, but now they see the importance, along with the need to have a social media presence,” Flores said.

Offering a checklist to businesses, Flores reminds owners that it’s not about selling everything you have, but instead it’s about crafting something unique and useful during a pandemic. He encourages small businesses to partner with each other in an effort to support one another, to look at crowdfunding as an option to generate attention and money for employees laid off or for businesses that are overburdened by overhead expenses.

Flores has also noticed that creating packages which combine several products all in one is selling well, something Belokurova has already done by showcasing several artists in one space, each offering a unique product.

“I think it’s great for a neighborhood to be introduced to somebody new each time. Lincoln Square is a very supportive neighborhood, where a lot of local people come back and shop,” Belokurova said.