OPINION: Police are not qualified to handle mental health crises 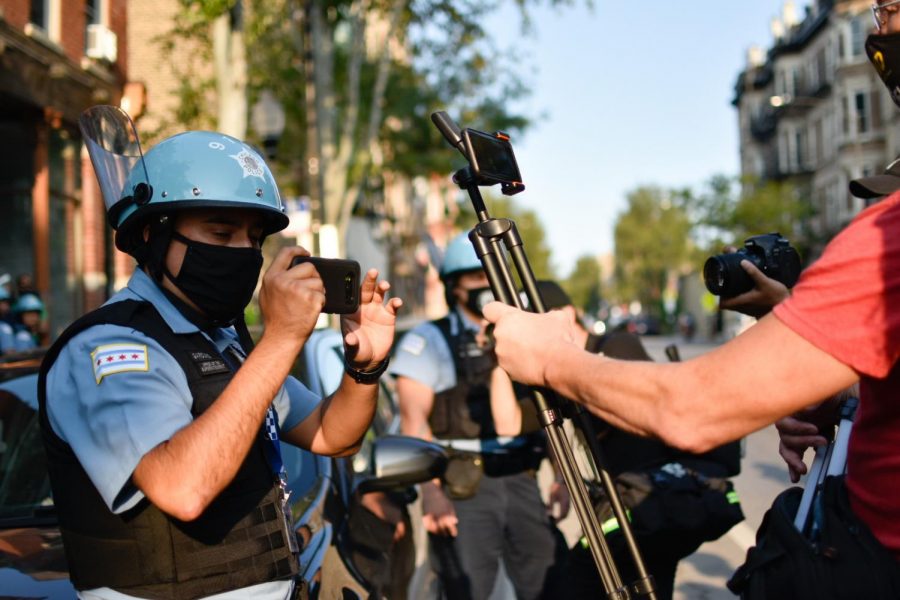 Protesters interact with members of the Chicago Police Department.

According to an article from Governing written in 2016, about 1 in 10 police calls are for mental health situations. These situations can vary from suicide prevention to emotional support. However, each situation is unique and will need a specific approach that appropriately responds to the circumstances. Despite this crucial part of mental health training, police officers are only required to take eight hours of Crisis Intervention Training (CIT). In comparison, officers are required to take 58 hours of firearm training.

We have to reexamine how our police force serves us. We have to recognize that there are multiple systemic problems that cause these unnecessary deaths.

One main issue is the overwhelming amount of money going towards budgets for city police forces. USA Today reported that Chicago alone is spending two billion for the fiscal year towards its police budget.

“A conversation that came up is truly looking at the funds that we give to police departments, and figuring out what is actually needed,” said Jenny Andersen, a member of the National Association of Social Worker Illinois Chapter. “We’re going to things that truly could be reallocated, for example, does a small town in Iowa with a population of 1500 need a budget for riot gear?”

“I think it would be wonderful for police to receive more comprehensive mental health training,” Andersen added. “But I wonder if a barrier to that right now is that we have such a short window of training that we require.”

Another aspect of systemic issues is how society stigmatizes mental health. “I think it’s easy for us to say that mental illness is a disease that requires health,” said Demetrius Jordan, an adjunct professor at DePaul’s Driehaus College of Business. “But I don’t think an overwhelming majority of the country really believes that. I think many people in this country still believe that these things are illnesses and aren’t diseases to be treated. But they’re social ills to be controlled and eradicated.”

This isn’t isolated to our public works, but extends to our policies as well.

These systemic issues plague our police force. From purposeless funds, social stigma, and uneven training, the police are failing to adequately protect and serve the public’s needs. We have to address these issues before we consider reform or abolishment.

“We need funds and energy for education, mental health services, addiction services, job training,” Jordan said. “We have to find ways not to spend money to hide mistakes that we’ve made.”

There are multiple avenues we can take to shape our police force to serve the public. A new task force called Crisis Assistance Helping Out On the Streets (CAHOOTS), formed in Eugene, Oregon is one example. CAHOOTS is a team made of mental health and crisis responders along with medics. They respond directly to urgent mental or medical needs. According to The Register Guard, “They attend to people suffering with addiction, disoriented people, mental health emergencies and sometimes homeless people in danger of getting a ticket, in order to assess, aid and make a plan to help.”

“It’s a really exceptional model. That is a way that I could really see crisis, mental health care, you have people who are in crisis, and you sometimes need to get them to a hospital or an inpatient program,” Andersen said.

CAHOOTS is able to connect citizens in crisis directly with responders who are trained in social work. Their backgrounds give them the tools to assess what the citizen may need, rather than an officer who could endanger their life.

“What’s happening with CAHOOTS,  that’s really powerful for communities across the board, and local agencies are understanding how to get people in crisis connected,” Andersen said. “I think that resources should be allocated to those things. But I’ve always thought that before we were having these kinds of conversations in the wake of more media around violence, in the wake of people experiencing mental health crises, I thought those community resources are often lacking.”

These services are crucial because they help the community identify early signs of mental illness. People can get treated earlier and not subjected to stigma.

“We need to invest in early detection of mental health issues, early education, so that we can work with individuals as six and seven and eight to make sure that they’re getting the help they need,” Jordan said.