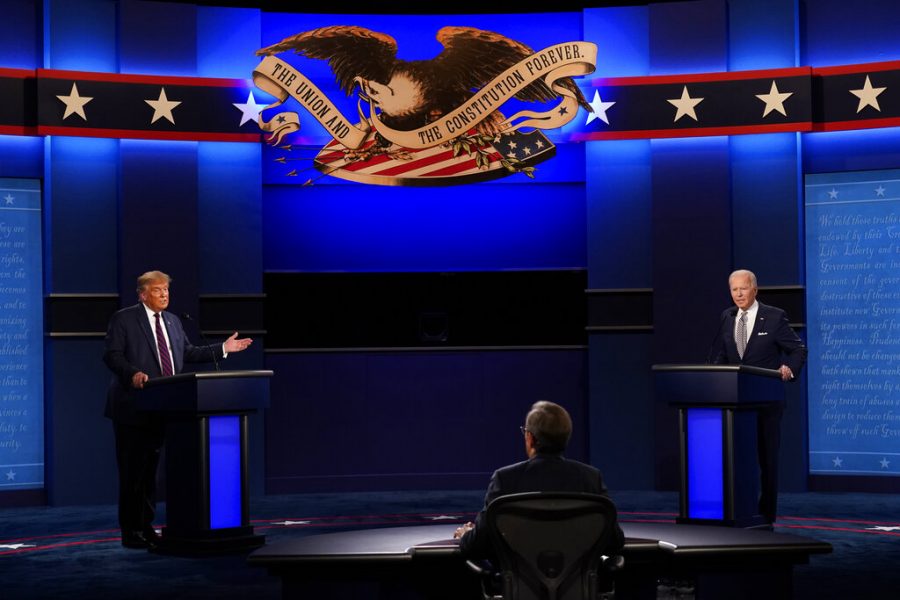 President Donald Trump and Democratic candidate Joe Biden faced each other for the first time Tuesday night in the first debate of the 2020 presidential election. During the 90-minute debate, the candidates often interrupted one another with angry personal attacks that proved the urgency of the candidates to better defend their greatly opposing views of a nation at its turning point.

The candidates succeeded in echoing the essence of their campaigns. President Trump spoke loudly, emphasizing his desire to be a powerful force of nature. Biden, on the opposite end, intended to paint his opponent as unempathetic and made frequent emotional appeals, often looking straight into the camera to appeal directly to viewers.

“The reason it’s shut down is because, look, you folks at home,” Biden said as he turned to the camera. “How many of you got up this morning and had an empty chair at the kitchen table because someone died of Covid?”

The moderator, Chris Wallace, repeatedly reminded the candidates that they each have two uninterrupted minutes to speak as a result of the chaotic nature of the night. On a few occasions, Trump insisted on speaking after Biden’s turn even after Wallace said he couldn’t respond.

The candidates displayed their evident dislike of one another, through frequent interruptions and directed insults. Biden told the president to “shut up” on a few occasions and said that Trump is the “worst president America has ever had.”

In conversations about race and violence, Trump again refused to condemn white supremacists after Wallace asked him if he would openly make that statement at the debate.

“I’m willing to do that,” Trump began before then taking a step back from his response. “I would say almost everything I see is from the left wing, not the right wing.”

Trump often deflected questions that night, prominently in conversations on his health care plan and belief in science.

“Do you believe that — that human pollution — gas — greenhouse gas emissions contributes to the global warming of the planet?” Wallace asked.

Trump responded in an indirect way, circling back to a previous point he had made about the need for better forest management, especially in California.

Throughout the debate, Biden backed away from Trump’s insistence that the former vice president is a leftist. In relation to the killings of Geroge Floyd and Breonna Taylor, Wallace asked Biden if there is a “separate but unequal system of justice” for Black people in the United States. Biden’s response was one that did not coincide with many beliefs of the far left but did not denounce them either.

“They risk their lives every day to take care of us, but there are some bad apples and when they occur, when they find them, they have to be sorted out,” Biden said of police officers. “They have to be held accountable. And what I’m going to do as President of the United States is call a — together an entire group of people at the White House, everything from civil rights groups to police officers, the police chiefs and we’re going to work this out.”

The Commission on Presidential Debates announced Wednesday that they will be adding additional structure to the debate format to facilitate a more orderly discussion.

“The Commission is grateful to Chris Wallace for the professionalism and skill he brought to last night’s debate and intends to ensure that additional tools to maintain order are in place for the remaining debates,” the statement read.