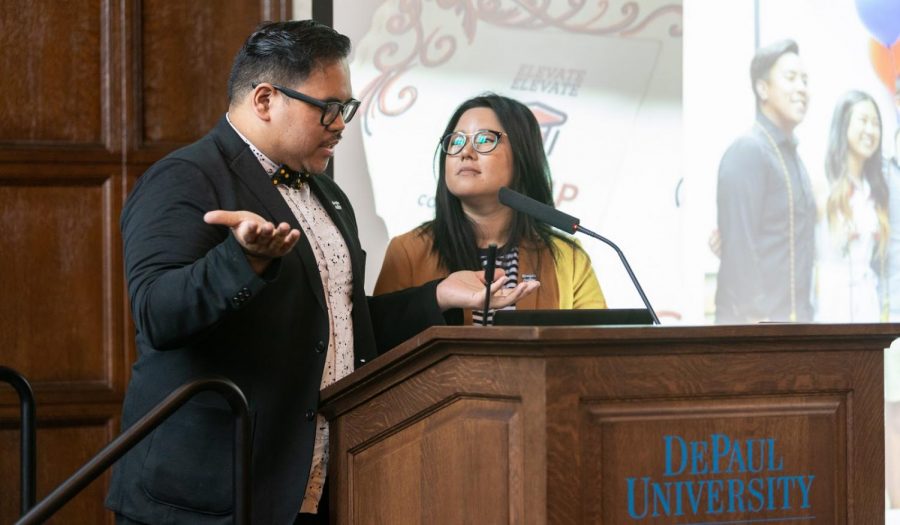 The Outstanding New Staff Professional recognizes and celebrates a staff professional who has made a positive impact on the DePaul community and enhanced the student experience in a relatively short period of time. The staff member must have been employed by DePaul University for less than three years and demonstrate high performance standards while engaging with campus activities outside their specific duties and responsibilities.

Long was the inaugural appointee of Coordinator of the APIDA Cultural Center in October 2018, which opened as a result of the Center for Identity, Inclusion and Social Change closure back in 2016.

Originally, Rev. Holtschneider announced three centers including serving the Black, latinx and LGBTQIA communities. According to Long, members of the APIDA community quickly demanded their space on campus resulting in Long being hired eight months later than the other three centers’ staff.

DePaul’s history with the cultural centers has been in Long’s mind when looking at her role and mission at DePaul.

“Knowing that history, one of the biggest things that I try to do is raise attention and awareness of APIDA students,” Long said. “Our issues, our experiences and how we deserve these spaces on campus.”

Since Long was the first coordinator for the APIDA Center she was instrumental in the creation of the centers environment and purpose. Long said preserving DePaul’s history was one of her goals when developing the current APIDA center.

“Because [the APIDA Cultural Center] came out of student activism, there was a very intentional and purposeful way that I wanted to center student voices in building what the center is about,” Long said.

“Eva makes sure to make space for dialogue around many topics which include anti-Blackness, transphobia, anti-immigrant sentiments, anti-Asian and homophobia,” Love and Meija wrote in her nomination.

Alongside Long’s passion for meaningful conversations and social justice initiatives, her work at the APIDA Cultural Center played a role in her success.

In her role, Long has lead APIDA Heritage month celebrations, facilitated weekly Cha(i) Time a weekly informal gather at the APIDA Cultural Center and served as an advisor for APIDA Stisterhood Uprising a group designed as a dialogue space for APIDA identifying woman, trans and non-binary individuals.

On top of that, “Eva’s job description did not include undocumented student support, yet she made sure to do her role and support undocumented students while supervising a graduate assistant,” wrote Love and Meija. “Through her intentional advocacy she brought to light many concerns of the undocumented community and pushed us to think through to better support our students.”

Student affairs and higher education were not the path that Long saw herself taking — in fact, she did her undergraduate degree in political science. While higher education did not come into her career scope unil her senior year, her original passion for education public policy has played a crucial role in her journey.

“Politics and public administration through the lens of education was always something I wanted to do,” said Long.

Long continued to discuss her experience working on pre-school public policy providing free education to those in poverty and advocacy for higher education grants during her college experience. Having this background helped Long discover her passion for multicultural education.

“[Long’s] leadership has taught our office how to amplify the voices of the marginalized and how to advocate for those often forgotten about,” wrote Love and Meija, which seems to be the encapsulation of what Long’s career and mission are all about.