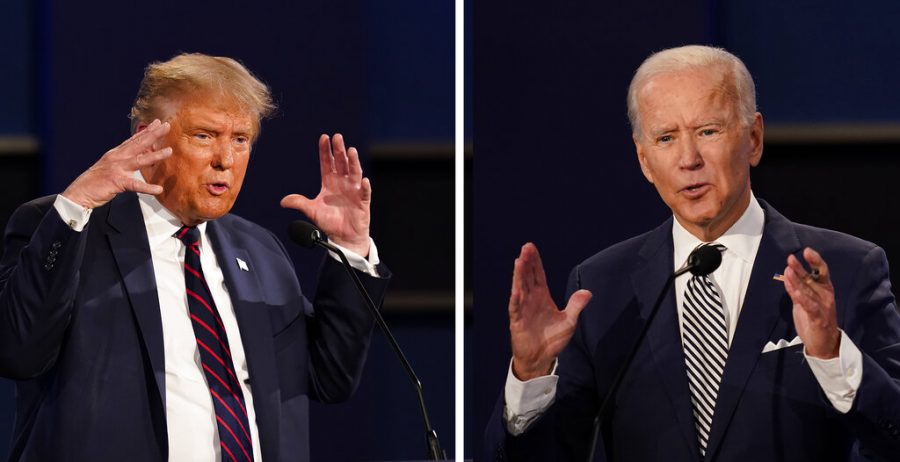 It was unlike any presidential debate before — filled with name calling and constant interruptions.

“Will you shut up man? It’s hard to get any word with this clown,” said Joe Biden when President Donald Trump kept heckling the former vice president whenever it was his turn to express his views on a topic.

On September 29, Democratic presidential candidate Joe Biden went head-to-head with Trump during the first presidential debate. Both campaigns agreed to abide by the rule of having 2 uninterrupted minutes where each candidate could answer the question of the segment.

DePaul’s Democratic Party held a watch party where students could stream the event together.

“Everyone accurately pointed out that it is hard to get your point across when the person on the other side is heckling you and badgering you and just interrupting you all the time, and you just have to try and balance taking him on and what he is saying and also giving your message,” said Brandon Tejeras, president of the DePaul College Democrats.

President Trump interrupted Biden and moderator Chris Wallace a total of 128 times. Because of the constant interruptions, the debate was difficult for many DePaul students to watch.

“There was no structure at all. It was like shoving a fork in your eye for 90 minutes,” said graduate student Emily Goldstein. “It was just 90 straight minutes of people talking over each other. There was not a single coherent answer to a single question and there was nothing I could take away from it. And I learned nothing from it at all.”

For many, the debate failed to shed light on the issues facing the country. Oftentimes the debate became personal and both candidates were unsuccessful in proposing any policies that they would implement or change if they took office.

“There were no real substantive policy measures,” said senior Anna Roth. “That’s what politicians are for. We vote for politicians because they have policies to implement. Trump called Covid the China virus and then Biden responded saying you’ve done a bad job. That’s not a policy measure. That’s just two people fighting about each other and each other’s personalities which was disappointing.”

The debate got so personal that Trump even called out Biden’s second son, Hunter Biden’s drug addiction and his leave from the military.

“There were a lot of bad moments but the two worst were when Donald Trump was attacking Joe Biden’s son who had a past drug addiction,” said freshman Erin Henze. “That didn’t have any connection and was a total waste of time and just disrespectful. And, when Donald Trump didn’t denounce white supremacy. Those were the two main things that I took from the debate which is not at all what you should take from a debate.”

Yet with all that happened, this may have been the most controversial statement of all.

Wallace asked Trump if he was willing to denounce white supremacists groups. Instead Trump started calling on “Antifa and the left” for violence and vigilantism.  The president did eventually address the issue of white supremacy, but did not outright denounce it, in a message that has been widely criticized.

“He basically told white supremacists to stand by and wait for his instructions. So that was very telling to see the POTUS saying something like that,” said sophomore Bridget Killian.

The DePaul College Republicans did not respond for a comment.

Despite the negative reviews on this debate, all the students said that they will be watching the rest of the debates, in hopes that rules and regulations will be established. The next debate will take place on Oct. 7 between Kamala Harris and Vice President Mike Pence at 8 pm CST.