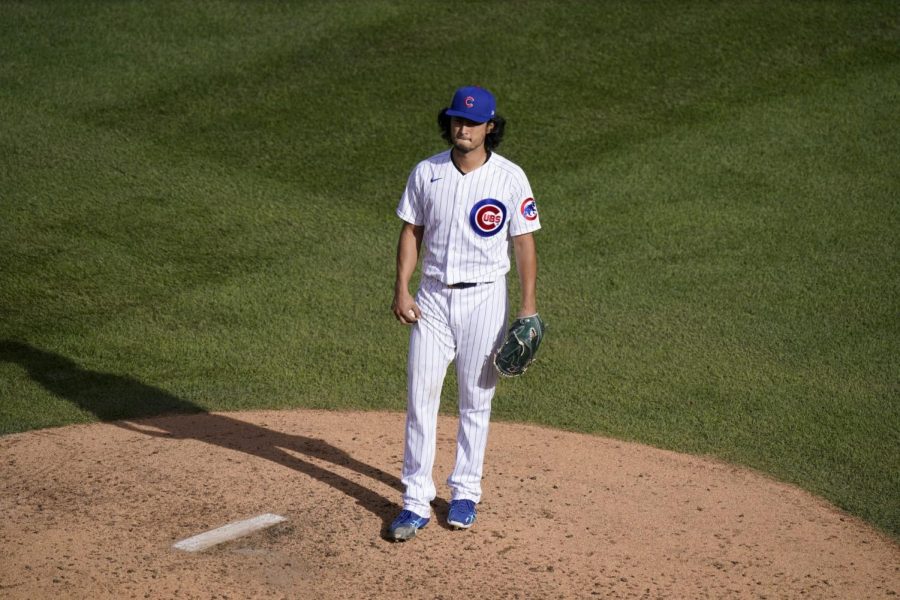 Chicago Cubs starting pitcher Yu Darvish waits on the mound after being removed during the seventh inning of Game 2 against the Miami Marlins on Friday.

The Cubs and White Sox both made the postseason for the first time since 2008. Naturally, it got people excited and dreaming of a possible all Chicago World Series. However, as it turned out, it was nothing more than a dream.

Just like in 2008, both teams crashed out of the postseason with the White Sox once again accounting for the only Chicago win. But it’s the manner in which they lost that speaks on the direction that both teams are headed.

The Cubs were facing a lot of questions about their offense heading into the postseason despite breaking out in their final series of the season against the White Sox. Considering how their games against the Miami Marlins went, those concerns were warranted.
“Every facet of this team had its ups and downs throughout the year, but over the last good while, the offense has been dreadful,” said Corey Freedman, co-host of the Cubs Related Podcast. “The offense struggled mightily. We know the group has the potential to be better, but this isn’t the first time we’ve seen the offense go missing with this group.”

The Cubs managed only one run in their two-game sweep at the hands of the Marlins. That run came via a solo home run by Ian Happ.

Following the 2-0 loss to the Marlins, Cubs’ manager David Ross told reporters that it was “uncharacteristic of who they are” when referring to the offense. But the numbers suggest it was in line with recent history.

The continued struggles of Javier Báez, Kris Bryant and Anthony Rizzo persisted. Drilling down even further, according to 670 The Score’s Matt Spiegel, since the 2016 postseason, the trio have gone 19-for-41 (.194 batting average) with 51 strikeouts and six walks.

Rizzo has a team-option for next season and Bryant and Báez are set to become free agents in 2022. This may have been the last hurrah for a lot of them. It’s been four years with three in the postseason, where the core have been given a chance to show they can turn things around. They’ve failed to do so, which means changes might be on the horizon.

Looking forward, the uncertainty continues to grow. The future of Cubs president Theo Epstein has also come into question. Epstein has one year left but according to NBC Sports Chicago’s David Kaplan, he and owner Tom Ricketts are set to meet to discuss long-term plans. Part of those plans could see Epstein stepping aside with general manager Jed Hoyer taking over.

Over on the South Side, despite also falling in the wild card series, the sensations following the elimination were completely different.

The White Sox went into the postseason with some concerns as the team stumbled into the postseason culminating in losing two of three to the Cubs. Questions about their starting pitchers not named Lucas Giolito and Dallas Keuchel rose as well as how their offense would perform without Eloy Jimenez.

The Sox put some of those fears to rest against the Oakland Athletics after winning the first game thanks in large part to a dominant pitching performance by ace Lucas Giolito. But it was all for nothing as they went on to lose two straight, with the final game that the Sox will look back on as a missed opportunity.

“They left 22 runners on base in the last two games,” said Sean Anderson, producer at 670 The Score. “There was some weird lineup and bullpen choices and some bad luck, like Garrett Chrochet’s injury in game 3, but at the end of the day, you can’t win if you don’t score and the Sox had three golden opportunities to do so.”

In game 3, manager Rick Renteria took a calculated risk when he pulled his starter after only two outs in the first inning. The plan was to go with Crochet for a few innings and then mix and match the rest of the game. His injury threw their plans for a loop.

“The deficiencies that hurt them the most this series was pitching and their lack of a designated hitter in games 2 and 3,” Anderson said. “They acquired Edwin Encarnacion to provide power to a DH position that only slugged .365 kast season, and in game 2, in both at-bats, he struggled mightily.”

The lack of a third starter and a productive DH cost the Sox even in a shortened, three-game series. Plenty of questions were also raised towards Renteria and his handling of his pitchers in the final game. But it is more likely than not that he will be back next season.

“I don’t know if he is the right man for the job, but it will be his job in 2021 and I think rightfully so,” Anderson said. “Fans calling for his firing are overreacting. This team won 35 games and held the top spot in the AL late in the season. Yes, the last week of White Sox baseball was frustrating, but there was a lot more good than bad from Rick Renteria.”

Ask the Cubs and the White Sox about their postseason runs, both will say that it ended prematurely and they expected to get farther. The difference is that the analysis following the elimination were polar opposites.

The Sox are expected to get back to the playoffs come next season. Adding a DH, right fielder and another starter are only going to improve an already young and talented team. In some ways, they are set to be a juggernaut for years to come.

Over on the North Side, however, the talk has been about the end of an era and the disappointment that the Cubs core have underperformed.

The Cubs will have their work come out for them in 2021, more so than the White Sox. The hope now is that it does not take another 12 years for both sides of town to enjoy postseason baseball.