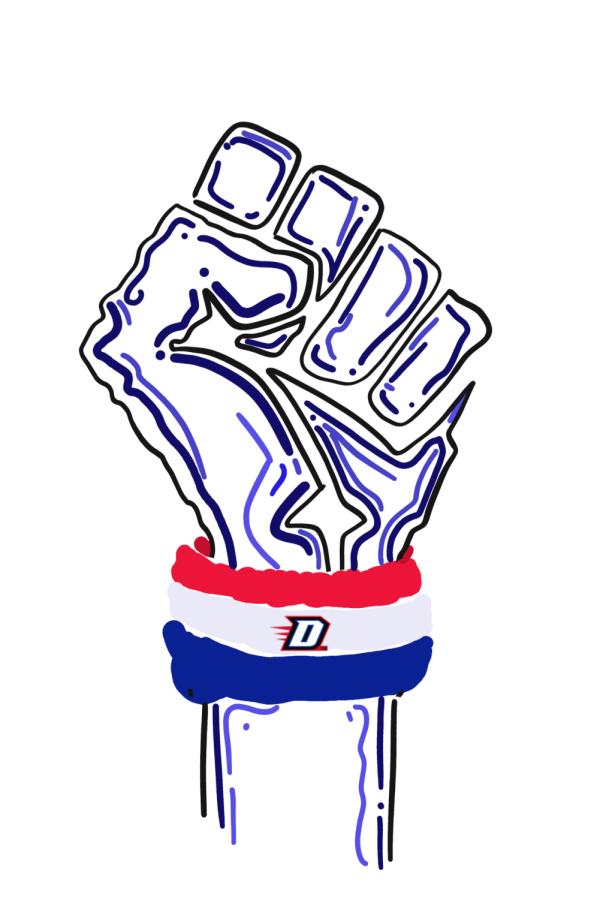 This past summer saw America face two major challenges: the Covid-19 pandemic and the continuation of social injustice and police brutality.

Then, in August, another video emerged from Kenosha, WI. where a police officer shot eight bullets into Jacob Blake’s back.

Both videos and the already built up frustration from many people regarding police brutality in America drove masses out into the streets to protest these instances of brutality. As the discussion regarding social injustice and police brutality got bigger, more and more athletes became a part of the dialogue — including student-athletes.

DePaul’s student-athletes took this opportunity over the summer to express their voices and try to help with the ongoing issue of Black men and women being killed by the police.

Margaret Hastings, a senior on DePaul’s track and field team, had the idea to start a fundraiser for Black Lives Matter Chicago. In an effort to help the organization, Hastings wanted to raise money that could help them continue to protest issues like systemic racism and police brutality.

“When all the events started taking place in early June, end of May, everyone was really affected by it and impacted, and I wanted to do something that would have a positive impact on my community,” Hastings said in an interview with The DePaulia. “DePaul is made up of such a diverse community and I never want anyone to feel that they are not supported and their voice is not heard. I came with the idea to start a T-shirt initiative to raise money for Black Lives Matter Chicago and to have a community still feel connected and supported.”

Hastings said that she was able to raise over $330 dollars in two weeks, through entirely student-led fundraising. There was no specific monetary goal that she had in mind when starting the fundraiser — instead, Hastings wanted to bring the DePaul athletics community together to use their platform to help other people.

DePaul also has a representative in the Big East’s Diversity, Equity and Inclusion group, which aims to spread awareness about racism, social injustice and police brutality. Rutendo Chimbaru, another senior on DePaul’s track and field roster, is the Blue Demons’ representative and has been working with the conference all summer long.

“I got the Big East position about a year ago, that’s when the Big East started the Diversity and Inclusion group,” Chimbaru said. “I’ve been working with them on initiatives to help student-athletes and raise awareness about certain DEI issues.”

One of the initiatives and topics that the Big East and DePaul have been pushing forward is voting, and registering to vote. DePaul has been putting out messages all over social media on how to register to vote, and the power of voting.

The Big East is also the first conference to approve men’s and women’s basketball teams wearing Black Lives Matter patches on their jerseys this upcoming season.

Chimbaru is unable to vote in American elections because she is an international student from Harare, Zimbabwe, but that is not stopping her from having important and difficult conversations with people that can vote about why it’s important to participate in elections.

“It’s been important to have these tough conversations with people, even though I may not be a citizen, I’m still Black in America and that’s a whole different experience compared to where I’m from,” Chimbru said. “It’s been pretty great to have conversations with people, to connect with people from different backgrounds. It sucks you have to connect with such really hard topics, but it’s made people realize that as student-athletes, we are more than athletes. We are humans first and you have to stand up for what you believe in.”

Even though Chimbru is not originally from America, she is still a Black person in the country, which entails a different experience than what white people go through on a daily basis. Although Chimbru has not had any negative interactions with the police, she says there is a certain way she has to act and behave in order to stay safe.

“Even though I’m Black, it’s been a learning experience about African-Americans in the U.S.,” Chimbru said. “I can not say I’ve had a lot of bad experiences, so I can’t speak on that specifically. But you become mindful of how you are presenting yourself. I remember walking down the street and seeing a police car flashing, and my first instinct being to make sure that I’m behaving in a certain way. You become mindful of those little things in the back of your head. That’s definitely a different experience from what I have experienced back in Zimbabwe.”

One of the different experiences that a Black person has to go through compared to a white person is the idea that there are two different justice systems in America, especially when dealing with cases of police brutality.

In the case of Breonna Taylor, who was fatally shot by Louisville Metro Police Department officers Jonathan Mattingly, Brett Hankison and Myles Cosgrove in March, Kentucky’s grand jury only charged one officer with first-degree wanton endangerment.

“It’s a mix of emotions, anger was definitely a part of that, disappointment,” said Patrick Watkins, a junior midfielder on the men’s soccer team. “Just felt tired because it’s been going on, the same song. It’s been going on for a long time. Going into it, I was thinking this should be happening, and in the back of my mind I was thinking this will be overturned. I definitely spoke to a lot of friends back at home, we shared the same feelings. Now is not the time to get down, we can mourn a little bit, but ultimately we have a goal in mind and we should still reach it.”

For Watkins, Chimbru and Hastings, they want to keep using their platform at DePaul to continue speaking out against systemic racism and police brutality. Even though Watkins is disappointed with the decision in Taylor’s case, he doesn’t want that to put an end to the larger goal: equality for everyone.

“We just have to continue plugging away at it, and to not give up,” Watkins said. “That’s what they want — they want our voices to be quiet, but we can’t. We have to be louder.”