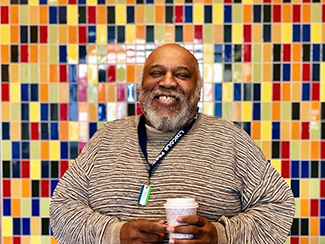 Bell, 71, has spent the majority of his career working in higher education administration, specifically in student affairs.

“I love student affairs because I’ve found over the years that this is where so much of the significant part of a student’s education takes place,” Bell said.

Bell expressed the importance of civic engagement and that students should make time for it.

“The things that happen in the co-curricular environment are really important and I’m particularly excited about the fact that this is a discussion around civic engagement, because it’s very important that students spend this time examining and developing their own values around civic involvement and make some commitment for it for their lifetimes,” Bell said.

Bell attended graduate school in the late 1960s and early ‘70s during what he described as a “very tumultuous time in American history.” As a young person, Bell explained how he and others in his generation questioned the social norms of the time regarding issues about race, gender and sexual orientation as well as the values they were taught by previous generations.

“Our most significant cultural influence for my generation was pretty much based on a Walt Disney-esque type culture that encouraged us to believe tremendous amounts of myths about our country, and we began to question those things in the sixties when we were in college when all of these great movements were going on,” Bell said.

Bell said these movements were very important to him and expressed the privilege he felt as an African American in being able to attend a “majority” university.

“As an African American, I was one of a few people who were privileged to go not just away to a resident university, but to go to majority universities,” Bell said. “I went to the University of Illinois at Urbana-Champaign and at the time, there were fewer than 150 African Americans on a campus of nearly 60,000 students … yet African Americans composed only one half of one percent of the student body.”

When discussing his time at UIUC, Bell explained the obstacles and discrimination he faced as an African American student.

“Even though my campus was considered the Greek capital of the world … there were no Black fraternities with houses, and I was not permitted to join any of the 57 houses that happened to be all-white,” Bell said. “In addition to that, I entered a class of 400 to study architecture, and there was me and two women and the three of us were excluded out of our classes and we were told that there was no place for us in the curriculum and no place for us in the profession.”Bell recognized the challenges college students are facing in the age of Covid-19 and the impact it has had on traditional events and activities important for their progress.

“These are tough times to be a college student,” Bell said. “This is a tough time to be young because those demarcations that we would normally have [in] your life … you can’t have during the time of Covid. You’re not on campus full time in-person. There are no athletics, there are no traditional events up to and including commencements and convocations, so you don’t have those demarcations of your advancement.”

Despite students missing out on those demarcations, Bell encouraged students to stay connected with one another.

“There are some things that you do have that are very important, and that is you have an affiliation and an interaction with one another and even if you can’t do it in-person, you can do it through social media, you can do it like we did old school with the telephone … and this is such a significant part of your education,” Bell said.

Bell added the significance of this time period for young people as they will have an impact in shaping the future of the United States.

“From the old youth generation, I say to you the new and contemporary youth generation: use this time,” Bell said. “This is such an important time that you live in and you are so important because you will determine whether we succeed as people, whether we succeed on this planet and whether this 244-year-old experiment called democracy is going to live and it all rests with you.”

When asked how to ensure one’s voice is heard and how to work with others with opposing viewpoints, Bell said he is able to listen to the opinions of others “without being emotionally involved in what people are saying.”

“My views are hard-earned, but they are not hardwired, and I am constantly open to education,” Bell said. “I think that my presence here today, even though I’m doing a large share of the talking, is to take away the feedback that I get from this group and everyone who can see me on this screen … but everyone … has something to teach me or something I’m open to and your existence enhances my existence.”

Bell added that he has learned to “own” his identity as he has aged.

“As a product of growing older, I certainly own my identity a lot more because I’ve had to fight for it and believe me, there have been life and death issues around my being black, around my being gay [and] around my not being a man of privilege in terms of money,” Bell said.

When asked what advice he would give to students interested in civic engagement, particularly in Chicago, Bell said students should educate themselves about the history and the culture of the communities they would be involved in.

Bell added that when individuals encounter others with different values than their own, it is “an opportunity for exchange and for learning” and helps an individual “clarify” and express their own values. Bell said that these disagreements in values should be expressed in a “civil” manner and should not lead to conflict.

“It behooves us all to find a way to civilly … interact with each other because the goal is not conflict,” Bell said. “The goal is to enhance commonality. That does not demand that we all look alike or feel alike but that we can all share the same space both physically and [a] social space together.”

SGA’s Civic Engagement and Social Action Series takes place Tuesday nights at 5:30 p.m. with a new panelist each week until the 2020 presidential election in November.