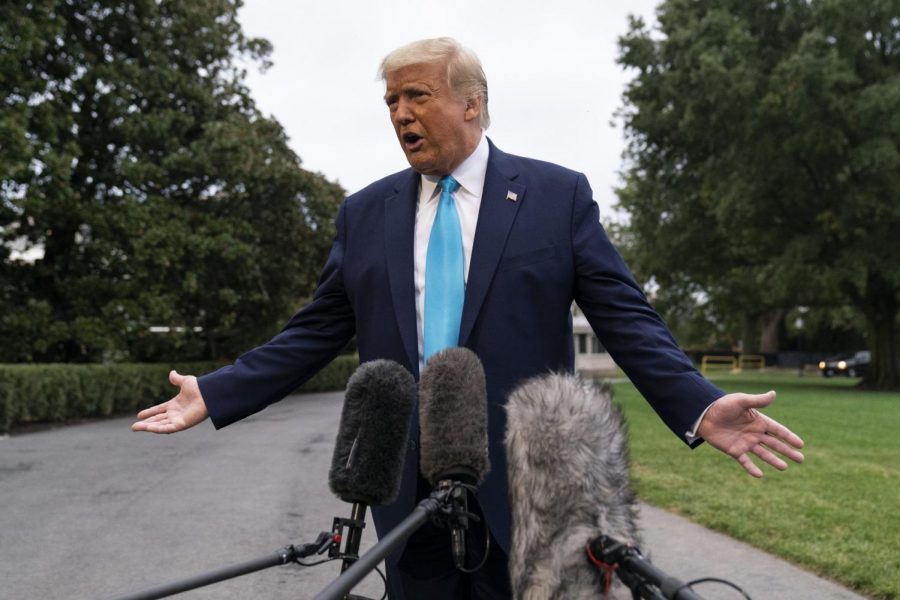 Republican, Democrat or Independent, it is easy to say that President Donald Trump has an interesting relationship with the press, occasionally even insulting them — an action that he should be held accountable for.

Trump is notorious for the phrase “fake news,” calling out journalists and news organizations both in-person and on Twitter. Going even further, Trump has had several interactions with journalists where he lacks respect and professionalism.

A key example was when Trump directly insulted Cecilia Vega, senior White House correspondent for ABC News. This started when Vega took a few seconds to ask her question after she had been picked.

“She’s shocked that I picked her,” said Trump. “She’s in a state of shock.”

Vega replied saying that she was not in shock and continued to thank the president for calling on her, according to USA Today. It follows that Trump misheard her to have said that she was not thinking.

“I know you’re not thinking. You never do,” Trump said in response to Vega.

Trump then dismissed her question as irrelevant since it was about the FBI investigation into Supreme Court Justice Brett Kavanaugh who was being nominated for his role at that time. The question was deemed irrelevant by Trump since it was unrelated to the topic of trade which prompted this press conference.

More recently, CBS reporter Weija Jiang was victim to Trump in a press conference about his Covid-19 response. Jiang asked Trump why he took so long to warn people about the spread of Covid-19. Trump used his China travel ban as proof that his response was quick to dodge her question.

As Jiang continued to ask for an answer to her original question, Trump kept saying “do your research.” Jiang then presented specific dates in persistence for an answer. Eventually, Trump told her to “keep your voice down.”

Trump continues this behavior to discredit the press, according to Leslie Stahl, a correspondent for CBS’ “60 Minutes.” The goal is to cause a lack of trust between these organizations and the people so that when they publish something that he does not like, the people will be skeptical of it.

“At one point, [Trump] started to attack the press,” Stahl said in an interview with PBS NewsHour’s Judy Woodruff. “There were no cameras in there.”

“I said, ‘you know, this is getting tired. Why are you doing it over and over? It’s boring and it’s time to end that. You know, you’ve won… why do you keep hammering at this?’”

Stahl went on to say, “And he replied: ‘You know why I do it? I do it to discredit you all and demean you all so that when you write negative stories about me no one will believe you.”

How do people stay updated on current events? They watch the news, read the newspaper and view articles online. So, hypothetically, if Trump discredits the journalists and news organizations that are keeping the American people updated on his work and his campaign, who would the American people believe? Would the people believe a president or a journalist? That is a chance Trump might be willing to take.

“[Trump] famously undermines his own administration officials when they give background briefings to the White House press corps, under agreed upon rules of anonymity, and then attacks the communication of his own officials as ‘fake news,’” said Chris Bury, senior journalist in residence at DePaul University in an email. “Overall, Trump’s relationship with the press is dysfunctional. It has inflicted enormous damage on the reputation of professional journalists who do their best to seek the truth.”

Journalists deserve respect from public officials because they do their work to provide information to the people. They do it to create a better world, not to spread their own agenda.

“Almost all journalists are in this business because they think it is an important calling,” said DePaul professor Rick Brown. “They think it’s important to give people the information they need. Very few of them come into it with some goal of putting forth their point of view, hurting other people and beating their opponents.”

Trump needs to be held accountable for the damages he has done to news organizations across the world. If people are unable to trust journalists, then ultimately there is nobody watching over public officials to make sure that they are not abusing their powers. To limit Trump’s potential agenda of discrediting certain news organizations, it is important for journalists to stay as transparent and objective as possible.

“It will take enormous effort on the part of journalists and their organizations to repair the damage Trump has caused,” Bury said.  “We must work harder to be as transparent as possible in our sources and methods, link to original documents whenever possible and engage regularly with the public so they understand we are part of the community and, like them, we wish to improve it.”