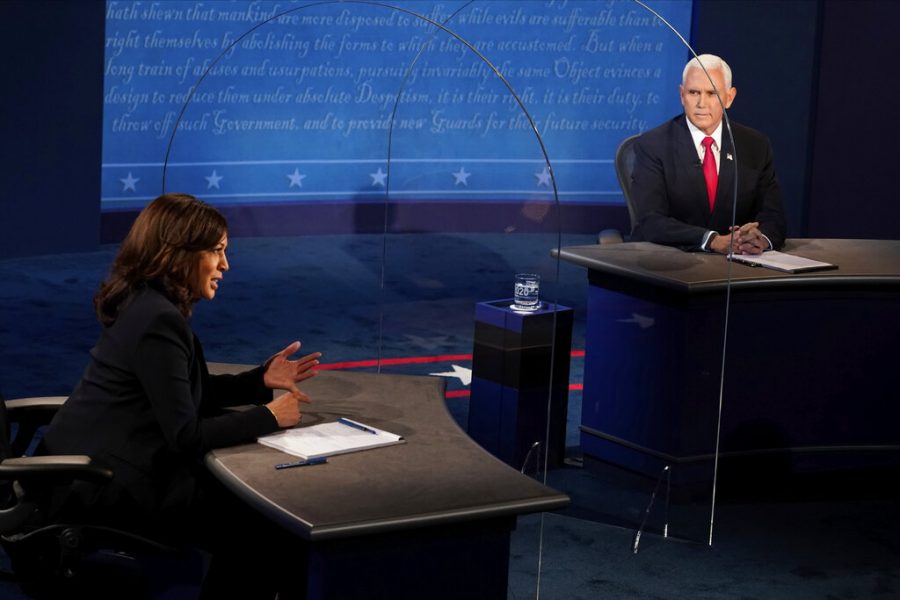 The candidates were separated by plexiglass barriers and remained seated throughout the debate, in light of President Donald Trump and several White House personnel testing positive for Covid-19 earlier in the week.

The first topic of the evening was the ongoing Covid-19 pandemic which, according to Harris, is “the greatest failure of any presidential administration in the history of our country.”

The debate then shifted focus to the economy. Page questioned Harris about her campaign’s proposal, which plans to raise $4 trillion in taxes on wealthy individuals and corporations.

Pence insisted on his administration’s economic success, asserting that he and Trump have cut taxes, rolled back regulations, and fought for free and fair trade.

When asked what her campaign’s stance on the Green New Deal is, Harris evaded the question.

Harris instead referred to climate change as “an existential threat to us as human beings.”

Pence pivoted the conversation away from climate change, praising his administration’s environmental work.

“We’ve made great progress reducing CO2 emissions through American innovation and the development of natural gas and fracking,” Pence said.

Page then asked the candidates how they’d describe the fundamental relationship between the U.S. and China. Pence blamed China for the coronavirus pandemic and said the U.S. wants to improve its relations with China.

“We want to improve the relationship, but we’re going to level the playing field and we’re going to hold China accountable for what they did to America with the coronavirus,” Pence said.

Harris slammed the trade war that President Trump has incited with China.

“It resulted in the loss of over 300,000 manufacturing jobs, a manufacturing recession, and the American consumer paying thousands of dollars more for goods because of that failed war,” Harris said.

Regarding racial injustice and calls for police reform, Harris promised that she and Biden would ban the use of chokeholds and carotid holds.

“George Floyd would be alive today if we did that,” Harris continued.

When asked whether or not justice was served by the verdict reached in the Breonna Taylor case, Pence expressed sympathy for the Taylor family but affirmed that he trusts our justice system.

“There’s no excuse for what happened to George Floyd,” Pence added. “But there’s also no excuse for the rioting and looting that followed.”

When given the opportunity, Pence refused to unequivocally promise that he and President Trump would vacate office in the event that they lose the election.

“I believe in all my heart that President Donald Trump’s going to be elected for four more years,” Pence said.