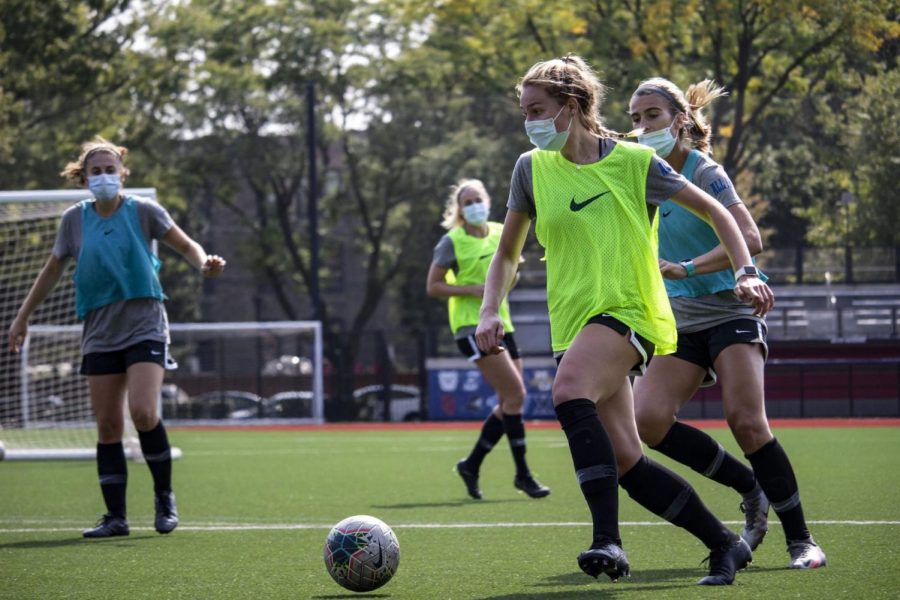 DePaul women's soccer returned to practice in August, but must wear masks during all of their workouts.

When DePaul started to bring back student-athletes in August for workouts and practices, the athletic department had to come up with a strategy that would ensure athletes and coaches would be safe from the ongoing Covid-19 pandemic.

Before any coach or athlete was allowed back into the Sullivan Athletic Center, DePaul had to make sure the building was clean, set up hygiene stations and order enough masks for everyone.

Once the building was ready for the return of coaches and athletes, everyone had to go through surveillance testing to identify if anyone was symptomatic with the virus.

“The biggest protocols that we’ve had to reiterate to students are if they have any symptoms at all, they have to report,” said Sue Walsh, associate athletic director for sports medicine at DePaul. “We have been testing kids even for super mild conditions that normally a kid would play with, but now we are testing them immediately.”

In an interview with The DePaulia, Walsh went through the athletic department’s handling of the Covid-19 pandemic, and described what protocols coaches and athletes must follow when on-campus.

According to Walsh, DePaul has been testing around 50 people for the virus, but men’s and women’s basketball — who currently get tested once a week — will start getting tested three times a week once the season starts in November.

DePaul uses the services of Innovative Express Care to test for the virus. One of the reasons DePaul picked them as their Covid-19 testing facility was because they are within walking distance of the campus, according to Walsh.

“One of the reasons we went to them is because they are within walking distance because you don’t want to put an asymptomatic person in a vehicle,” Walsh said. “Rush is our team physician, but the issue was getting people there in a vehicle if they had symptoms. So we thought it was safer to go this route. Rush is still our team physician, and if someone did get sick they would still go there.”

After testing coaches and athletes for almost two months, DePaul has the fewest amount of positive tests in the Big East, according to Walsh. But DePaul is towards the bottom in the conference in terms of its total number of athletes and coaches.

While frequent testing remains an important part in allowing teams to practice, wearing masks is just as vital in DePaul’s protocols. According to Walsh, everyone must wear a mask while in the building, and masks must be worn during all team activities.

Walsh also said that when teams are finally allowed to play games against another school that wearing masks won’t be required during a match.

“There is thought that when they get soaking wet that they are less effective,” Walsh said. “The problem with basketball is that it’s indoors and when you are guarding someone face-to-face, you are not going to socially distance. Outdoor sports, like golf, tennis, softball, cross country, it’s not as big of an obstacle for them. They could go without masks, except maybe in doubles in tennis. I do think if they don’t wear them to participate, if they can have them on every other team it would be very helpful.”

Apart from testing and enforcing mask-wearing, DePaul has had to limit which teams can use the locker rooms. According to Walsh, men’s basketball is the only team that can access their locker room because they have enough room in there to socially distance.

But teams have also had to split up how many athletes they have in the weight room and, at times, have groups practice together instead of having the entire team be in contact with each other.

“It’s been very different,” women’s soccer senior forward Morgan Turner said. “We are not able to spend as much time in the athletic center or just outside of school, especially with not having in-person classes and not being able to study together. We have to wear a mask in practice and in the weight room, any time on campus. Our weight rooms are normally a group of 25, but now we have to do groups of eight. That’s definitely an adjustment to do.”

Another important issue that the athletic department had to handle before opening up the Sullivan Athletic Center was how they were going to clean the building on a regular basis.

Before any team is allowed to enter the building the next day, the facility must go through a cleaning process, which also limits how much time an athlete is allowed to use a specific equipment, or in the case of basketball, how many shots they can get up after practice.

“The last practice of the day, it probably doesn’t matter because by the next morning there wouldn’t be anything alive on the surfaces, but the university comes in and does a deep cleaning,” Walsh said. “The demand on facilities, and my staff, is much higher. I would say, especially in sports performances because when they clean, they have to clean in between each group. So, you are talking most of their days being 12 hours long, and a couple hours of that are just cleaning — wiping benches, weights, medballs and stuff like that in between.”

As the year progresses and Covid-19 cases only continue to increase in America, most of these protocols will have to stay in place until the virus is under control. But there is still hope that the sports that got postponed in the fall can be played in the spring.

For volleyball senior Avarie Evans-Allen, she is looking forward to playing in the spring, but is also taking every precaution possible to ensure that her team can stay safe.

“This is my last year, this is my last little run, I don’t really have any plans continuing after I graduate,” Evans-Allen said. “So, this is something I have been looking forward to as a freshman. There’s definitely a higher sense of urgency for me, not only with the Covid precautions and people being safe and making smart decisions, but also how quickly we can get better as a team. I can speak for all the seniors — we want to do something different this year, we want to do something that DePaul volleyball hasn’t done before. We have a really great team.”