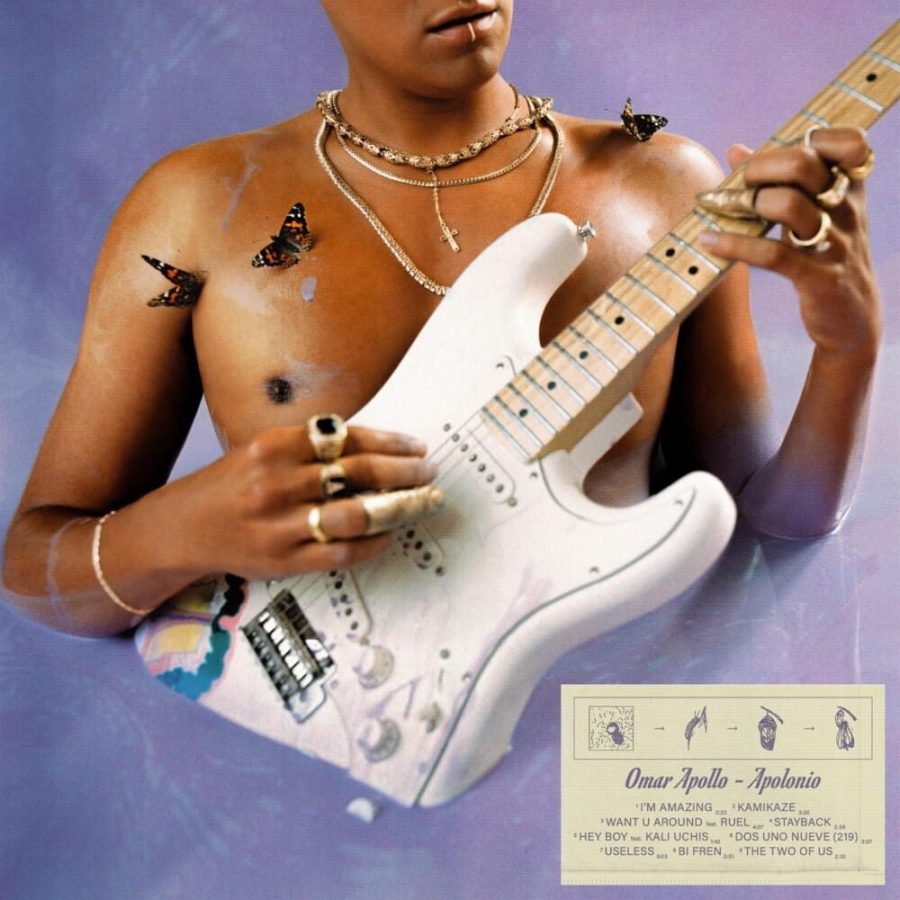 The cover art for Omar Apollo's latest album "Apolonio" which released on Oct. 16.

Multi-talented R&B artist Omar Apollo creates music that is effortless, emotive and uniquely his own. By blending Prince influenced funk-pop, rhythmic R&B, soulful crooning and his Mexican-American heritage, Apollo brings forth a visionary collection of songs with “Apolonio.”

Born in Hobart, Indiana, Apollo splashed onto the scene after a run of impressive singles, with two critically acclaimed EP’s “Stereo” in 2018 and “Friends” in 2019. Subsequently, Apollo toured the world over the following years and returned with his most in-depth body of work challenging the listener to shed any past perceptions of what genre his music belongs in.

Whether it is flawlessly wearing stylish skirts and glitter or adding rap bars and shimmering vocals to one of the latest Joji tracks, Apollo has created his own path within the music industry and in doing so immortalized a special bond with his fans.

Always honest in his art, the music video for the EP’s lead single “Stayback” displayed Apollo’s most straightforward nod to his sexuality. The video features a male love interest and Apollo sharing gazes from across a party but Apollo must “stay back” because of the lover’s girlfriend. Publicly, Apollo explains nothing about his identity though, offering his support for the LGBTQ community, and then telling the Los Angles Times, “I’m chilling,” when asked what he might identify with personally. In this way, Apollo’s androgynous stage persona has become an enigma for fans of all different experiences and communities to rally around in acceptance.

The production of the song “Stayback” focuses on a melodic guitar, a funky reverberated bass and a consistent drumbeat all melting in behind the high falsetto of Apollo. The song feels like an even more angsty version of Prince’s “I Wanna Be Your Lover.” While lyrically it is also about a remorseful rumination on someone who just won’t leave the singer’s mind even though it’s over, “I can’t help that you been on my mind. See you around, cause I don’t care anymore.”

Another highlight from the EP is the song “I’m Amazing” which sees Apollo using a free-flowing R&B to reminisce on the weight fame. Apollo already gets compared to a young Frank Ocean by critics, and on “I’m Amazing” Apollo exacts the beats of the song so confidently that it is tempting to say his new songs will land with the some of the same immortal gravity as Ocean’s.

The track balances between a set of distant piano chords and a multifarious beat over soul-infused guitars, with Apollo singing and rapping in Spanglish, “Aqui me quedo, me voy temprano. Y que voy a estar tarde, soy Mexicano. When I needed money that I could borrow. Pick you up, then have a show up in Chicago. I’m makin’ M’s now, listenin’ to Stevie.”

My favorite track on the EP right now is “Kamikaze” because of the way it uses a vibrant bassline to mesh with Apollo’s vocals. Lyrically, Apollo speaks on a failed relationship from his youth and cranks the bass and kick drum up to flow with an irresistible refrain of “Yeah, it really don’t feel good, does it? Pop shuv it. You don’t ever say, ‘My bad,’ you nothing, you nothing.”

Both the first and last verse of the track lyrically revolves around the drives Apollo took before and after the relationship, and the song’s imagery makes the listener feel like they’re driving solo on a midwestern highway, “I’m still driving all alone, it’s automatic. My eyes are tired, I’m drivin’ slow, no sign of traffic I pull over, go to sleep, listen to classics. Think of you, and you and me, ’cause I’m an addict.”

For an artist who once described that his songwriting process nearly always begins with heavy bass and drums, “Kamikaze” shows Apollo’s prominent skill in depicting vivid images lyrically.

As “Apolonio” ends, the only disappointing part I found was its brief nature. At only nine tracks, Apollo still completes what many artists wish to accomplish in 20 tracks and it leaves the listener wanting much more. Fans of Apollo should not have to wait too long for new content though, with the singer filming a documentary leading up to headlining the first show back, since covid-19 shutdown live music, at the historical Paisley Park, Prince’s former home studio in Minnesota.

Whether it’s pushing off the misogynist labels of American society to make art on his own terms or shredding guitar and bass solos, Omar Apollo’s newest EP “Apolonio” further proves the artists’ ability to produce elegantly genre-defying music.