Covid testing materials taken from ISU back to government 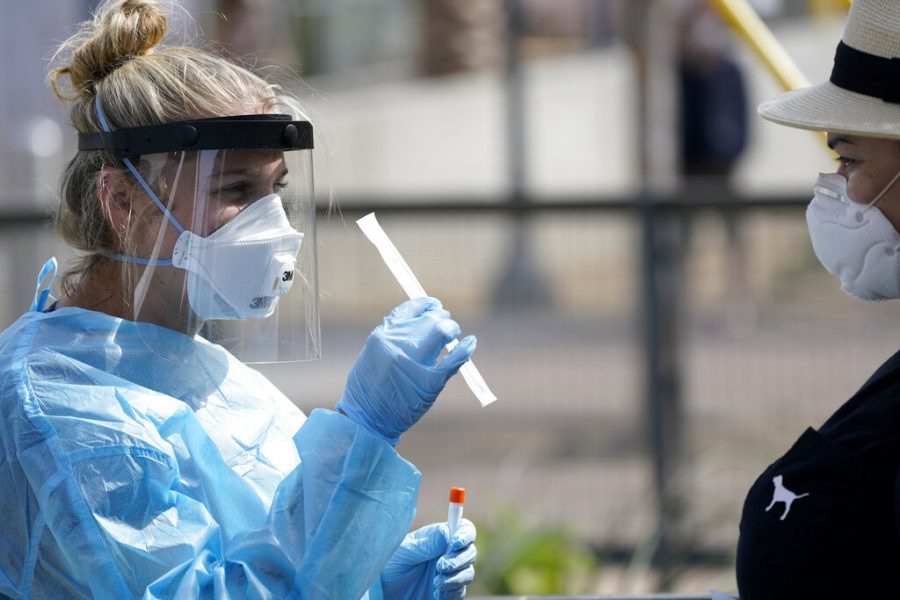 FILE - In this Aug. 13, 2020, file photo, nurse practitioner Debbi Hinderliter, left, collects a sample from a woman at a coronavirus testing site near the nation's busiest pedestrian border crossing in San Diego. The credibility of two top public health agencies is on the line after controversial decisions that outside experts say suggest political pressure from the Trump administration. The Centers for Disease Control and Prevention triggered a backlash from the medical community by rewriting its guidelines to recommend less testing. (AP Photo/Gregory Bull, File)

After Illinois State University lost Covid-19 testing materials to government reallocation, the school had to reimagine strategies for student safety.

Both Illinois State University and Loyola University were expecting Covid-19 testing materials from the manufacturer Quidel over the summer, but the U.S. Department of Health and Human Services utilized the Defense Production Act to enforce the priority of their order with Quidel above all others.

In a statement by the HHS, the department did not reference the universities but instead emphasized their efforts to supply nursing homes with ample testing.

“The federal efforts to supply nursing homes with rapid point-of-care antigen instruments and tests is our highest priority to save lives and the US Government will exert its full authority to complete this mission,” Assistant Secretary for Health Brett P. Giroir said in the statement.

“While there are certainly other entities that are also in dire need of testing supplies, I am concerned that this action has diverted tests that schools had expected to arrive in time for the beginning of the school year, harming their efforts to keep their students, staff and communities safe,” Durbin wrote.

Durbin continued to write that the situation reflects a broader lack of planning by the federal government and requested that the HHS provide an explanation for colleges and universities.

According to ISU spokesperson Eric Jome, the school ordered three testing machines and 5,000 reagent testing kits. In July, ISU was informed that Quidel would no longer be able to fulfill their order because of the government procurement.

Starting on Aug. 17, ISU has conducted almost 13,000 tests and more than 1,000 have tested positive. Out of the 442 test results received the previous day, there have been seven positive cases.

Jome says that although the school still has testing, the order they didn’t receive from Quidel would have enhanced their testing abilities. Failure to receive the projected number of testing supplies resulted in the university’s decision to move more classes online, with approximately 80 percent of classes online.

Now the university is moving towards saliva testing in partnership with University of Illinois at Urbana-Champaign. Ben Taylor, spokesperson for UIUC, confirmed talks with ISU for distribution of saliva testing equipment.

Jome said the university is in the process of developing a laboratory to accommodate the saliva testing by the end of the fall semester. The hope, Jome says, is to increase student capacity through increased testing capabilities.

“The plan is to be able to increase the capacity where we can be testing more people and more frequently,” Jome said.

Taylor says that UIUC is in conversations with multiple universities to deploy the saliva based testing to public and private schools across the state.