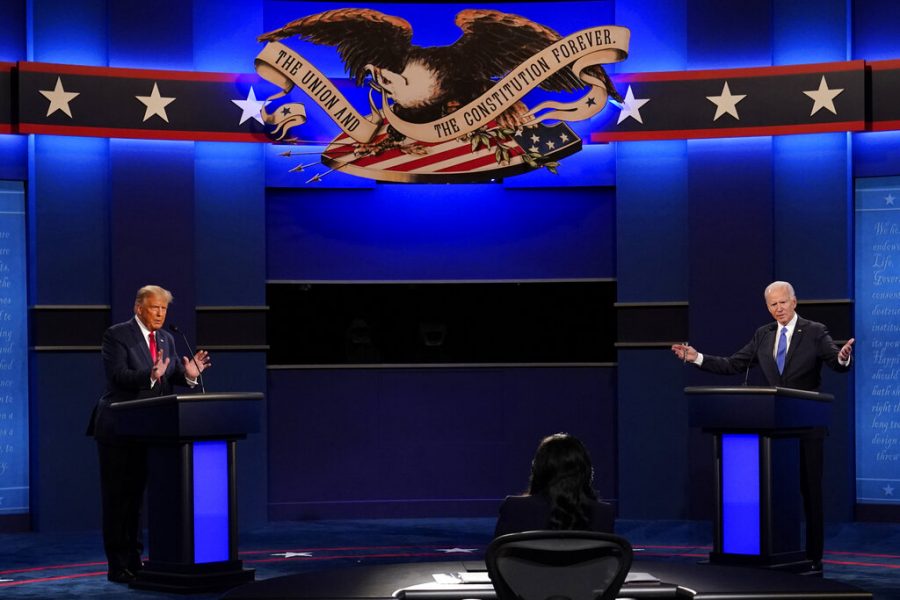 In an event that lacked the rancor and chaos of the first debate, President Donald Trump and former vice president Joe Biden portrayed their different visions for the nation in the final presidential debate on Thursday night.

The debate was moderated by Kristen Welker of NBC News at Belmont University in Nashville, Tennessee.

The Commission on Presidential Debates issued a statement after the first presidential debate on Sept. 29 that “additional structure should be added to the format of the remaining debates in order to ensure a more orderly discussion of the issues.” Prior to the final debate, the commission announced that the candidates’ microphones will be muted during opening remarks of each segment while the other candidate is speaking.

The candidates portrayed combatting perceptions of the pandemic and offered different plans to move forward. Trump’s outlook on Covid-19 depicted a healing country despite recent surges in positive cases.

According to reporting from The Washington Post, most states have experienced Covid-19 surges in recent days. The increase of positive cases in Texas and Arizona has, in fact, decreased in recent days but those surges are not entirely gone.

Biden, on the other hand, depicted a country that is still in need of a concrete plan and denounced the president’s leadership in handling the pandemic.

“Anyone is responsible for that many deaths should not remain as president of the United States of America,” Biden said.

Biden said that, if elected, he would encourage everyone to wear a mask, move into the direction of rapid testing and set up national standards for opening schools and businesses.

Though Trump said a vaccine may be announced in a matter of weeks, he said he could not guarantee that deadline. The president cited Johnson & Johnson, Moderna and Pfizer as companies that are making significant progress in vaccine production.

Top intelligence officials confirmed again Wednesday that both Russia and Iran are working to influence the election. The candidates were asked to respond to this discovery and what they would do in response.

Biden argued that Trump has not been transparent with his tax returns in an accusation that suggested foreign countries are paying the president. In a response that returned the same accusation to Biden, Trump said that he will release his tax returns soon and that he has “prepaid millions and millions of dollars” in taxes.

“Not one single person with private insurance would lose their insurance under my plan, nor did they under Obamacare,” Biden said.

Trump said that a minimum wage should be a state option. Though he said that he would consider raising the minimum wage in certain states, he does not think it would be durable in all states.

The conversation on race in America circled similar discussions that the candidates have had on the matter. Trump again referenced Biden’s 1994 Crime Bill which was intended to increase incarceration to crack down on crime. Biden diverted the accusation and instead proposed his intention to eliminate minimum mandatories and set up drug courts.

As Biden referenced his plans for racial justice reform, Trump questioned why he did not set out to accomplish this as vice president during the Obama administration.

“Success is going to bring us together. We are on the road to success. But I’m cutting taxes, and he wants to raise everybody’s taxes and he wants to put new regulations on everything,” Trump said of Biden’s policies on taxes.

“We can grow this economy, we can deal with the systemic racism,” Biden said. “At the same time, we can make sure that our economy is being run and moved and motivated by clean energy, creating millions of new jobs.”

This was the final presidential debate before election day on Nov. 3.