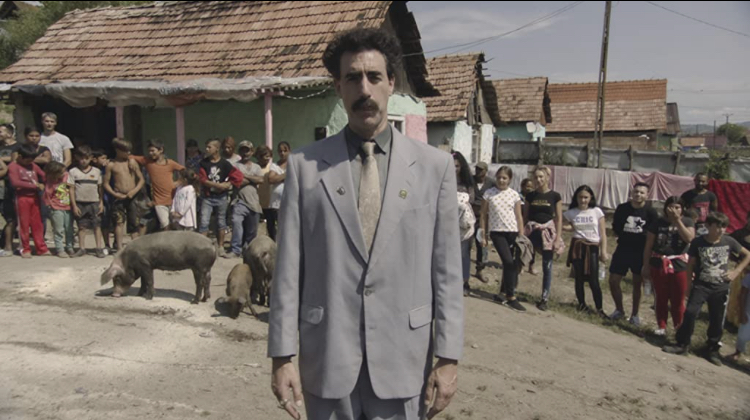 A sequel to “Borat” —titled “Borat Subsequent Moviefilm”— was officially announced only a month ago, and now it is available to us at our fingertips — what a strange time to be alive.

Sacha Baron Cohen has used the Borat character, an anti-Semitic and misogynistic Kazak reporter, to illicit shocking testimony from individuals ranging from your average business owner to powerful political leaders. He has risked his life on numerous occasions to capture footage for his projects, so this endeavor was nothing new for  Cohen.

When word arose of a “Borat” sequel, I immediately thought: the character is too recognizable, how would this be possible? Cohen addresses this directly and uses the opportunity to disguise himself as other characters, a la his brilliant series, “Who is America?”

Cohen’s ability to relate to individuals and allow them to become comfortable enough to say such abhorrent things informs his brilliance as a satirist. His comedic style almost evokes a type of bizarre journalism. Most comedians have failed to illicit cutting or provocative satire in the Trump era — with the exception of Cohen.

I think it’s his fearlessness as a performer and his embracement of shock comedy during an era of political correctness makes him better suited for this time. Perhaps, too, he is one of the few comedians who can match — or even attempt to exceed — the absurdity of the Trump presidency.

The film’s most inspired concept is the introduction of Borat’s daughter, Tutar. The performer, Maria Bakalova, equals Cohen, standing toe-to-toe with him for every comedic and emotional beat. There are even scenes spent completely with Tutar, who manages to hold the film up on her own, without the need for Cohen.  Bakalova is absolutely incredible and her scene at a real-life debutante ball in Georgia solidifies her utter fearlessness as an actress.

There is an emotional realness to Tutar’s arc, despite the silliness of the situations. Through her journey across America, she discovers the lies espoused by her father about the women, discovering her femininity. This aspect of the story makes a compelling case for Borat still belonging in 2020, updating him along with our current social contexts.

The amount of work that likely went into this film is staggering. Cohen, as Borat, stayed with two QAnon sympathizers over several days during the initial lockdowns. He never broke the Borat character, and managed to convince these men (Borat’s new best friends, Jim and Jerry) that he would be executed by the Kazakhstan government if he didn’t successfully gift Rudy Guilliani with Tutar.

Bakalova also worked covertly, posing as a journalist, and even gaining access to the White House and meeting President Donald Trump days before he tested positive for Covid-19.

Considering the limited filming time and constraints due to the pandemic, the cogency and resonance of the story is a little shocking. One could automatically assume it would be funny — at the very least for fans of Cohen’s style — but the father/daughter dynamic is quite touching, and the culmination of the story hits hard. So hard, in fact, that it makes me wonder if Cohen’s efforts to rally the country together to remove the malignant tumor in office might ultimately be in vain.

At this point, if your mind hasn’t been changed by the horror beset upon our institutions over the last four years, it likely won’t be changed by an ironically anti-Semitic, Jewish comedian running through CPAC in a Trump costume. That’s not to say that that and most of the other scenarios aren’t funny, because this is one of the funniest comedies I have seen in a long time. But does the film reach the cultural or political heights of its 2006 predecessor?

I am not sure, but as a satire in 2020, as impossible as it sounds, it is compelling, hilarious, bleak, but not quite nihilistic. It goes to some dark places in the final moments, but therein also lies some ray of hope at the end of the black storm cloud.was officially announced only a month ago, and now it is available to us at our fingertips — what a strange time to be alive.