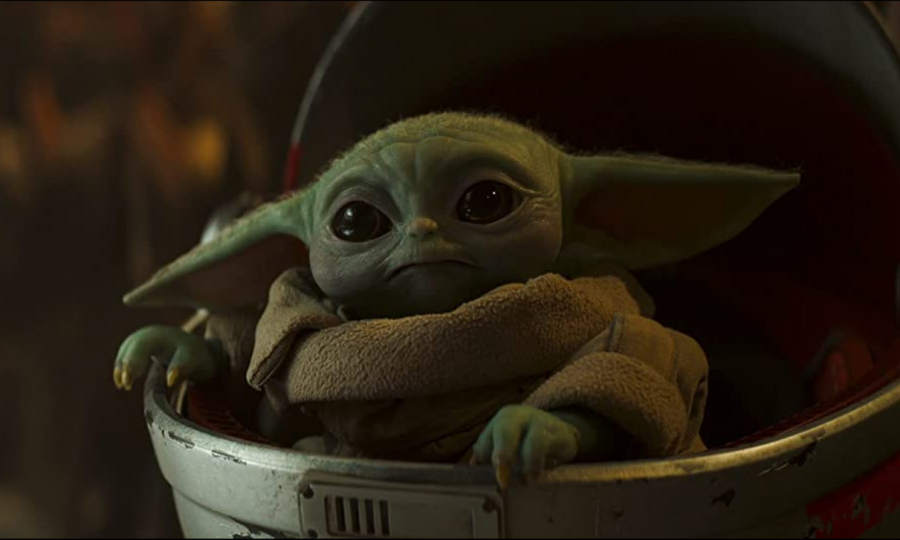 The Child—dubbed "Baby Yoda" by fans— in the season opener of"The Mandalorian."

When it was first announced on Disney+, “The Mandalorian” seemed like a show that was trying to do the impossible — forge forward with the “Star Was” Universe after the…. divisive… finale that was “The Rise of Skywalker.”

However, one year, one season and one oh-so-adorable Child later, and “The Mandalorian” has cemented itself not only as a massive icon of pop culture, but also as a surprisingly well-crafted neo-Western approach to “Star Wars.”

The show returned Friday for the first episode of its second season, and while I certainly didn’t hate it, I can’t help but wish that after all the hype and new cast members attached to season two, they would’ve aimed a little higher for the season premiere.

“The Mandalorian” chapter nine, “The Marshal” jumps right back into the thick of things and sees Din Djarin (Pedro Pascal) beginning his quest to find another Mandalorian so he can return The Child (aka Baby Yoda) to its own kind. He first crosses paths with a shady figure promising him information, and after a brawl outside a fighting arena, strings him up and gets him to reveal that there’s allegedly a Mandalorian on Tatooine, of all places. With a destination in mind, Mando and the Child pay a visit to the first returnee of the season — Peli Motto, played by comedian Amy Sedaris.

Peli feels like a strange choice for the first recognizable character of the season — she had virtually nothing to do with season one’s overarching plot, nor does her character have any useful information for Mando in the episode. Sure, Sedaris is funny, but the jokes don’t always land. Most of her dialogue is strong, but there are a few moments where it feels like someone let her riff for a little too long, and the physical comedy with the droids has never been my cup of tea.

On the whole, the pit stop to visit Peli didn’t feel very necessary, which is a running theme when it comes to this episode — things that prompted me to wonder “Is this really what they’re going with for the season premiere?”

After Peli sets them on their way, Mando and The Child arrive on Tatooine, where he runs into a figure dressed in Mandalorian armor at a bar. At first, it seems like Mando’s found his man, but when the would-be Mandalorian removes his helmet to ask the barkeep for a drink, we immediately know this must be an impostor — Mandalorians don’t remove their helmets in the presence of others. No, this is the town’s Marshal, played by Fargo’s Timothy Olyphant.

Mando and the Marshal don’t get off to a great start when Mando demands that he return the armor, and the two are mere seconds away from a Sergio Leone-style shootout in the bar before a massive earthquake derails their conversation. It’s revealed that the earthquake is actually a massive underground creature that the locals refer to as a “dragon,” and it’s been terrorizing the town for years.

Mando agrees to help the Marshal dispatch the dragon in exchange for the armor, and together alongside the townspeople and a group of Tusken raiders living on the outskirts of the village, they’re able to vanquish the beast and the day is saved. But wait…. Haven’t I heard this story before? Didn’t we already do an episode where Mando arrives in a small town on the outskirts of society that’s being terrorized by a monster, which Mando helps them defeat?

The answer is yes: both episode two and four  “The Child” and  “Sanctuary” in season one follow this exact story structure, and in “Sanctuary,” Mando even teams up with an unlikely adversary to get the job done — in that case, it was Cara Dune — while here it’s the Marshal.

I would be annoyed by the recycled plot structure regardless of where this was placed in the season, but the fact that Jon Favreau apparently decided that this was the story most suitable to open the entire season with is a little disappointing. One would hope that given each season only runs eight episodes, the writers would be trying to cover new ground, explore different planets and themes, and reinvent the show every week.

In all honesty, I can’t help but feel baffled and a little let down that such a rudimentary and uninspired plot is what’s supposed to get us excited for the rest of the season.

This is even further exacerbated by the tons of flashy pre-season casting and character announcements — Rosario Dawson as Ahsoka Tano is slated to pop up at some point, as is WWE star Sasha Banks and returnees from season one like Giancarlo Esposito and Gina Corano.

With so many big names and exciting characters attached, the show’s one-and-done formula can grow a little tiresome, especially because Olyphant’s Marshal character is extremely one-note. Even if he does pop up in a future episode, he doesn’t seem to bring much to the table other than another gun in a shootout, so spending episode one introducing him feels like a waste.

On the whole, “The Marshal” felt like an episode that was spinning its wheels — with the exception of the episode’s last 10 seconds. The episode’s final scene revealed that Boba Fett (Temuera Morrison) was standing on the horizon, watching Mando as he said his goodbyes on Tatooine.

It’s an exciting reveal, certainly, and it will be great to see a familiar face from the franchise bring to life an iconic character, but that single reveal in the final moments just isn’t enough to make the entire episode worthwhile. Though the production value is still high and Ludwig Göransson’s score is better than ever, season two’s first episode of “The Mandalorian” felt too unambitious and pedestrian to truly open the season with a bang.

However, even with a lackluster first entry, between the promise of new characters and familiar faces returning, I’ll gladly stick around for at least a few more episodes to see if “The Mandalorian” season two can follow through on all it has promised for the upcoming season.