OPINION: Witchcraft and Santeria are staples of Latinx culture, not a trend 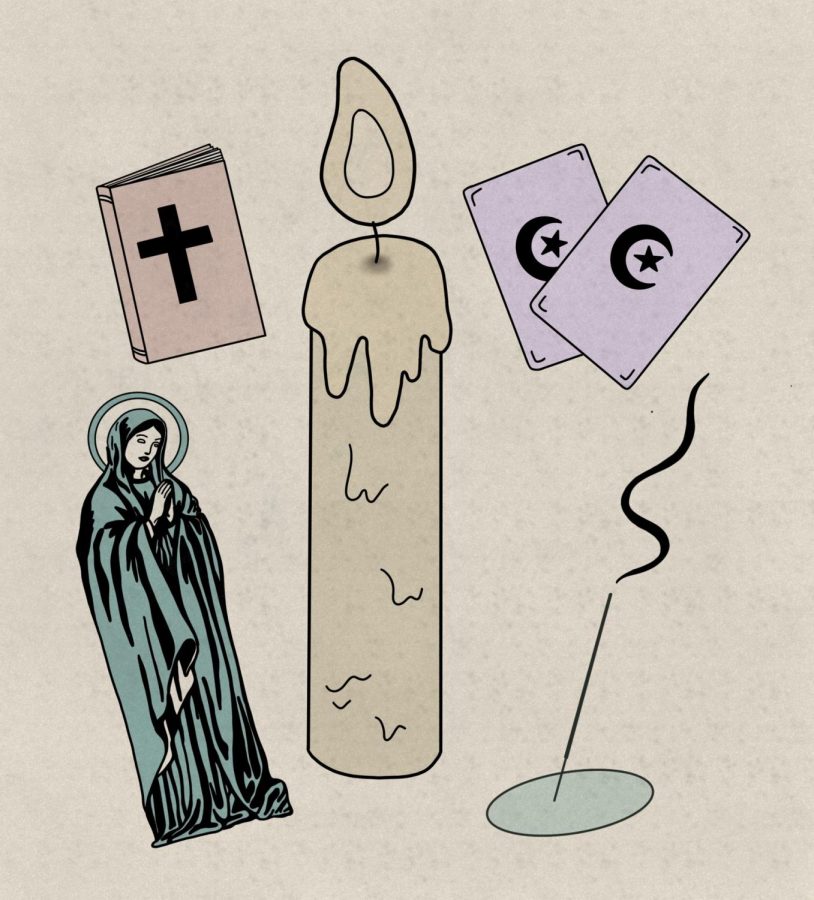 I was scrolling through TikTok when a video on a love spell popped out. I was immediately intrigued because I am a practitioner of brujeria. I saved the video and followed the account. I was so surprised that many people were interacting with the video.

My discovery with brujeria started my sophomore year with moon rituals that evolved to spells with candles and incense. But first, let’s define brujeria. Brujeria or “witchcraft” in Spanish, “describes or disparages occult religious practices in some Latin American and Afro-Caribbean cultures with indigenous roots,” according to Dictionary.com.

Santeria is defined as “a pantheistic Afro-Cuban folk religion developed from the beliefs and customs of the Yoruba people and incorporating some elements of the Catholic religion,” according to Lexico .  There is quite a difference between the two. Santeria believes in Olodumare, Olofl, or Olorun as higher power and in deities called Oricha or Orisha.

There are different Orishas that rule over different universal things like the ocean or motherhood. Many practitioners see Orishas as miracle performers or those in charge of causing unfortunate events.

There are priests known as Babalawos that help practitioners speak with the Orishas. Anyone can be initiated into the religion. They have to wear all white, can only be touched by family, friends, or lovers and must stay inside at night for a whole year. Followers are given an Orisha to follow them throughout their life.

Some like Yatzil Martinez, an Illinois State University student, view Santeria with interest but are skeptical because of what has been promoted in the media and through discussions.

“I’m not too well informed in Santeria but I have heard they do voodoo. It’s something I’d like to see but don’t to near myself with anyone who practices it. For me it’s like playing with the ouija board,” Martinez said.

The best way to describe brujeria is by an article by BeLatina, “Brujos and Brujas are independent and tend to use spontaneous rituals that speak to them without traditional doctrines.”

For example, I tend to cherry-pick my beliefs, I believe in La Virgen but not the Bible. I use the four elements to start my spells and rituals and get special candles from botanicas. Brujeria is not scary to me, it’s a comfort.

Others like Erika Cordova, who just recently graduated from UIC, was introduced to brujeria growing up.

“I unknowingly grew up with brujeria practiced in my home. My family performed egg cleanses, candle magic, etc. but it was considered religious paired with my prayers,” Cordova said. “My family refused to admit it was brujeria because it has such a negative view of my culture.”

Cordova’s culture, the Latino community, is where many individuals consider themselves as Catholic or Christian. Egg cleanses, candle magic, tarot reading and limpias are common in any botanica. There is a negative connotation with brujeria where some individuals use black or white magic.

Santeria practitioners had to disguise their deities with saints from the Catholic church while being colonized. In Brujeria those who practice it who grew up religious seem to have a connection with La Virgen de Guadalupe.

“I’ve recently started worshipping La Virgin de Guadalupe. She, to me, represents strong feminine energy and I grew up with statues of Her all over the house,” said Cordova.

Similar to Cordova, La Virgin de Guadalupe is a staple in the Latino community and many who practice brujeria remain to have faith in Her. I always have a statue of Her in my room when I do my limpias, meditations, or candle magic.

Brujeria and spirituality seem to be popular on social media. There are users on Instagram sharing spells, tips on cleansing energy and picking a card which are tarot card reading for the general audience. The curanderas, brujas, and anyone who practices brujeria or santeria are using social media to reach a broader audience.

TikTok videos show pick a card readings, spells that anyone can do on their own and information on spirituality. There are thousands of accounts on Instagram and Facebook pages that inform and educate followers on brujeria and santeria.

For Janet Roman, a senior at DePaul University, these practices have become more common.

“Well I’d say it’s becoming more popular because in a sense it’s cultural to many Latinx people,” Roman said. “I think if you ask any Latinx person they can recall of a tia, abuela or any family member who has tried it or has heard stories of someone trying it.”

Gen-Z and Millennials of the Latinx community were raised with this belief and have heard stories of brujeria, santeria and all forms of spirituality.