‘The kid from Chicago’: Ahamad Bynum signs letter of intent with DePaul 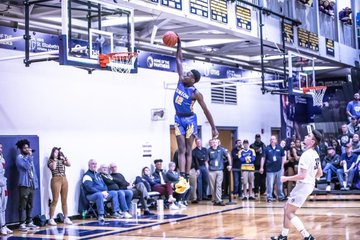 DePaul’s 2021 recruiting class has been one of the best in the country for some time now. But that was all predicated on five verbal commitments from Ahamad Bynum, Keon Edwards, David Jones, Kok Yat and Brett Hardt Jr.

On Wednesday, however, the Blue Demons finally received their first hard commitment when Bynum officially signed his national letter of intent.

“The kid from Chicago,” Bynum told The DePaulia.

Bynum kick-started DePaul’s 2021 strong recruiting class nearly a year ago when he verbally committed to the Blue Demons. Now, he’s put that commitment to pen and paper.

A 6-foot-1 guard out of Chicago, Bynum is touted as one of the best guards in his class and is the third-ranked player in all of Illinois, according to 247 Sports.

“[An] explosive guard that can score, pass, play defense and facilitate on the floor,” Bynum told The DePaulia about the type of player he is.

Bynum plays for Simeon Career Academy and the Mac Irvin Fire AAU team. Last season, Bynum helped lead his high school to a 24-9 overall record and a 7-2 conference record. As a junior, he put up 20.3 points, 5.3 assists and 3.2 rebounds per game.

“I’m cool with coach [Dave] Leitao and [assistant] Tim [Anderson],” Bynum told the Chicago Sun-Times last November. “Tim is like family. And the chance to play in front of family and friends was important. I want them to be close and be able to watch me play.”

Bynum also took part in last weekend’s Pangos All-American Festival where he played for the Midwest team. In the third-place game on Nov. 8, Bynum scored 29 points on 8-of-12 shooting.

DePaul’s recruiting in Chicago has expanded in the last couple of years, with the additions of Charlie Moore and Markese Jacobs giving the team a more local presence. But Bynum helps elevate that even more, as he comes from one of the city’s most elite high school basketball programs — Simeon.

The addition of Bynum will help the Blue Demons in the backcourt if Moore decides not to return for the 2021-22 season. DePaul is still waiting on four more players to sign their national letter of intent: Edwards, Jones, Yat and Hardt Jr. The Blue Demons also received their first 2022 verbal commitment last week when Preston Murphy Jr. announced his decision.

Currently, DePaul has the ninth-best 2021 recruiting class, according to 247 Sports, but the team is still after multiple other players.

The Blue Demons will begin their 2020-21 season on Nov. 25 when they reportedly host Western Illinois. DePaul is most likely going to play five non-conference games and 20 conference games for a total of 25 games in a shortened season. The Big East will begin conference play in December with each team playing either four or five games in the month.