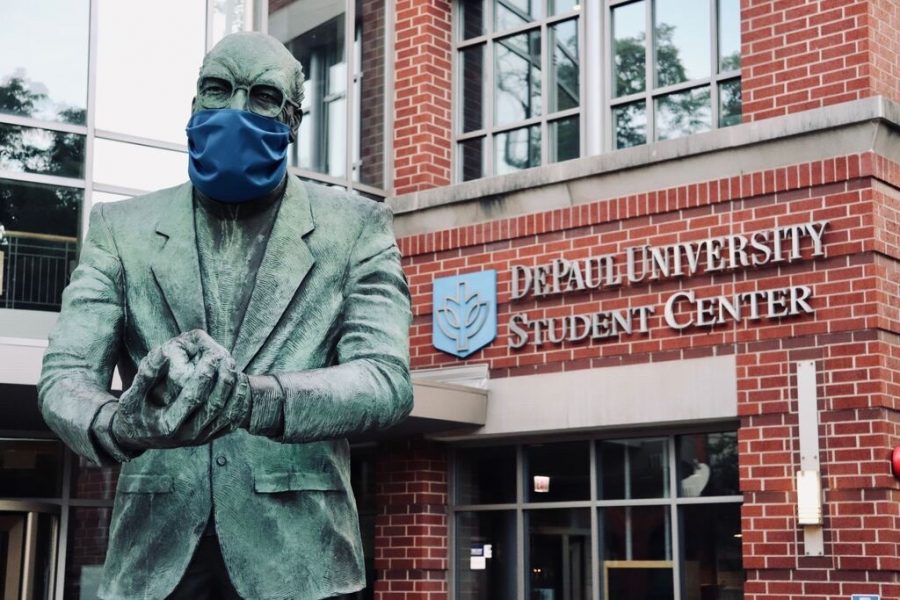 The statue of John J. Egan, located outside of the Lincoln Park Student Center, wearing a mask.

DePaul’s Student Government Association (SGA) is encouraging students to participate in its email action plan in an effort to urge the DePaul administration, Faculty Council and college deans to reinstate the grading relief policies implemented in the spring quarter of last year.

“We are disappointed with DePaul administration’s lack of empathy toward student circumstances throughout the Covid-19 pandemic and civil unrest,” the statement reads.

During SGA’s general body meeting on Nov. 5, the organization passed a resolution calling on the Faculty Council to adopt these grading relief policies this quarter in an effort to provide accommodations for students, citing the historic election, the Covid-19 pandemic and increased civil unrest across the country.

“Basically, the resolution came about understanding that students are going through a really hard time right now,” Reyes said. “Having empathy for the mental health and different extenuating circumstances that students have been dealing with and really pushing Faculty Council to issue some leniency for students is really what [the resolution] revolved around.”

Prior to passing the resolution, SGA President Alyssa Isberto said she along with Vice President Watfae Zayed met with Scott Paeth, the president of the Faculty Council, and Salma Ghanem, DePaul’s interim provost, to discuss grading accommodations for fall quarter.

“They had a meeting on Wednesday [Nov. 4] and they wanted to bring it up to the officers to see if we could bring it up then, but unfortunately, the officers did not think it was the right time to bring forth any suggestions or recommendations for grading policy accommodations [for] fall quarter,” Isberto said.

Isberto explained the response from the Faculty Council officers and urged SGA to create the resolution.

“After receiving that email, Watfae [Zayed] and I decided that we still really believe that creating accommodations should be made and we wanted to be ready with the resolution and wanted to make our statement in support for grading accommodations,” Isberto said.

After passing the resolution, SGA circulated a petition asking the DePaul community to support SGA’s resolution receiving over 2,000 signatures.

“It was just really interesting to see it all over social media that students were really asking for this accommodation to be made especially because this quarter, which I’m hearing from a lot of students, has been very, very difficult as opposed to… spring quarter,” Isberto said.

Afterwards, the Faculty Council responded to SGA’s demands saying that it was “too late” for it to consider their request prior to the end of the quarter and that faculty have expressed resistance “to continue this policy under any circumstances, let alone as a result of the election outcome.”

Reyes said students were unhappy when SGA informed them of the Faculty Council’s decision.

“The demand from students was there,” Reyes said. “When we updated students, they were definitely really upset, upset with Faculty Council, upset with DePaul administration and just reiterating that DePaul leads with no empathy and a lot of other comments on the SGA account [said] ‘Where are this university’s Vincentian values?’”

“I think that those questions and that anger and frustration is definitely very valid because having an administration that isn’t receptive to what students are going through beyond the classroom is really frustrating,” she added.

Isberto said “the main sentiment” she received from the Faculty Council’s response was that it is unlikely they would reconsider the decision.

“They said that the most that they would do was that within this week, Faculty Council officers would meet and talk about it again and that… if any kind of response were to be made, it wouldn’t happen until the December meeting, which is after finals,” Isberto said.

As a result, SGA decided to establish its email action plan to continue advocating for student accommodations. Isberto hopes the email action will put a greater emphasis on students concerns regarding grading accommodations this quarter.

“My main concern with this email action is just to show faculty and the administration… student concerns,” Isberto said. “Coming from students through this email action shows support that students were really struggling this quarter and need flexibility and just kindness from their professors as we’re all trying to navigate this remote learning.”

As of now, finals will continue to go on as planned but with all in-person classes and final exams moved online for the rest of the quarter.