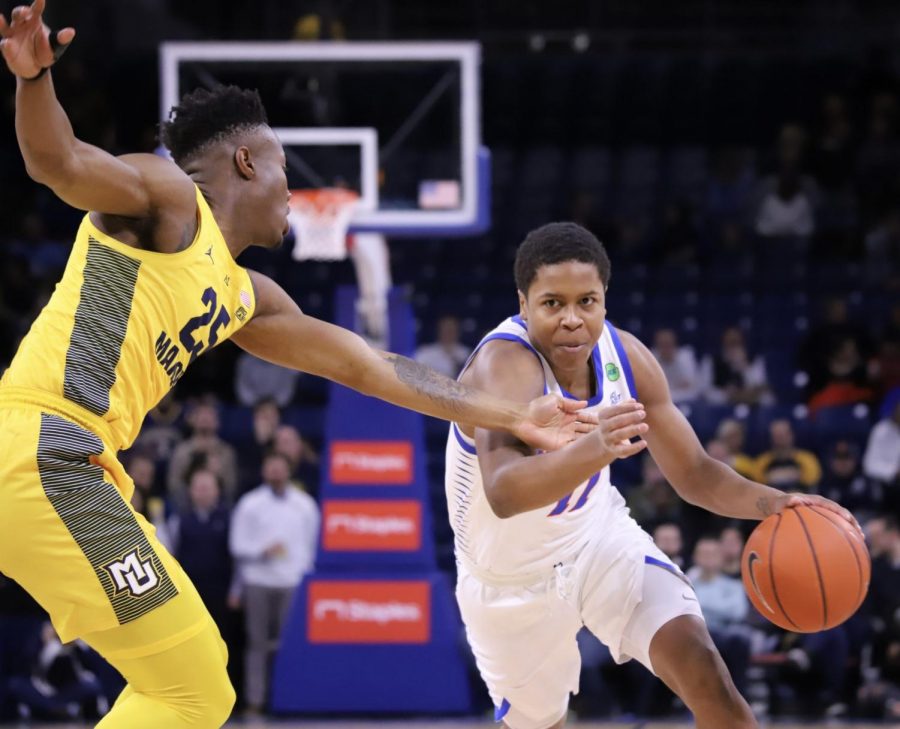 DePaul junior guard Charlie Moore attempts to drive to the basket in the first half against Marquette. Moore finished the game with 15 points.

The DePaul men’s basketball program has seen brighter days than the ones from the last decade.

The bright days of Ray and then Joey Meyer turning the Blue Demons into a national powerhouse are in the rearview mirror. Since the end of Joey’s tenure as DePaul’s head coach in 1997, the Blue Demons have only been to two NCAA Tournaments — 2000 and 2004.

Even in Joey’s last five years  at DePaul, the Blue Demons did not make one appearance in the tournament, only recording three wins in his last season.

One former DePaul player that was on the last few great Joey teams is Stephan Howard. Howard attended DePaul from 1988-92, and made the NCAA Tournament three out of those four years.

He was inducted into DePaul’s Hall of Fame in 2009 and still remains in the top 10 in the all-time scoring list and is second in free-throws made for the school.

Even though the Blue Demons aren’t nearly the same team as the one Howard played on three decades ago, he saw meaningful progress from the team last season — progress that had them on the verge of being ranked in the AP Top 25 poll for the first time since 2000.

“A big part of that is creating a culture where the expectations are that you win and that you are going to play in the tournament and that you will go up against top teams and be successful,” Howard told The DePaulia. “I think that Coach [Dave] Leitao did a great job of that last year. If you look at the beginning when they were [12-1] and beat Northwestern, Iowa and Texas Tech; and then when we got to the Big East, just didn’t do as well.

“To their credit, it’s not like we were getting blown out and there were multiple basketball games where it was a possession or two away from victory,” he continued. “But that’s part of the process of creating culture. You start it at one point and now, this year, it’s creating that culture and expectation of winning and being successful in the Big East.”

As Howard points out, DePaul did have a blistering start to the 2019-20 season, winning the first nine games and going into Big East play with a 12-1 record. But conference play began with several close losses to Seton Hall, Providence, St. John’s and Villanova.

Going into the 2020-21 season, however, DePaul does have a new person in charge of the athletic department after former athletic director Jean Lenti Ponsetto retired in the summer. Newly appointed athletic director DeWayne Peevy, who started on Sept.1, came over from Kentucky where he worked closely with the men’s basketball team and head coach John Calipari.

Peevy has also talked about building a winning culture that will result in yearly trips to the NCAA tournament, a place the Blue Demons haven’t been since 2004.

Howard likes DePaul’s decision to hire Peevy and is looking forward to the new ideas that he can bring to the program.

“I’m excited about DeWayne coming to DePaul,” Howard said. “Obviously, he came from Kentucky and had a close relationship with Coach Calipari and worked a lot in conjunction with the men’s basketball team. The hope is that he can translate some of the success Kentucky enjoyed into DePaul. So, really excited about the new ideas, the new energy that’s coming into DePaul and then hopefully the men’s basketball program will benefit from that.”

The hope is that Peevy can help turn the men’s basketball program around by implementing some of the ideas that worked at Kentucky. One way of doing that is trying to build some stability and momentum to help the team move in the right direction.

Since the end of Joey Meyer’s tenure in 1997, DePaul has had five different head coaches, with Leitao coaching the team from 2002-05 and then returning in 2015. Peevy did say in his first press conference that he believes there are other ways of building the program than firing a head coach.

“I think after Joey had left DePaul, there was a lack of continuity with coaches,” Howard said. “You had so many coaches that were at DePaul and some of them did well, some of them not so well. I think there were some coaching situations where we just got unlucky where you had a coach that was successful previously and was not able to translate that at DePaul.”

Even though DePaul hasn’t had much success in the last decade or so, there are still a lot of former great players that can help the program. A couple of weeks ago, Peevy held a Zoom meeting with some of those players from the previous great Blue Demon teams.

As Howard mentions, Peevy is trying to connect the older generations to this current generation of DePaul teams like other programs do around the country.

“We have had so many different coaches at DePaul and every time you get a new coach you are going to lose players that he coached with,” Howard said. “I haven’t felt that as a former player and that was honestly the first thing [Peevy] mentioned when he had us on the call, was trying to create a culture of connectivity and bring all the past teams and players back to be a part of this program. Coach Leitao has done a great job of that as well, but you can’t be a coach and also try to facilitate former players — in that same vein, you need help by the administrator.”

Howard’s hopes to see DePaul put everything together and have a successful season. The Blue Demons saw the makings of what that could look like early on last season and generated some buzz in Chicago, but it is now about sustaining that success so the city can fully embrace this team.

“It would create excitement because first you look at Chicago, I think it’s the third-largest media market, so you have that there,” Howard said. “Nike obviously wants DePaul to do well and then Chicago doesn’t really have a basketball team right now that they can lay claim to. I mean Northwestern is in the suburbs, so everyone that lives in Chicago or has any connection to Chicago knows Northwestern isn’t in Chicago. So, it’s right to have DePaul to put their imprint on the city of Chicago and claim it as their own. I really do feel that Chicago would in kind embrace DePaul, and once that does happen, I think it would be a steamroll of momentum  making DePaul a force to be reckoned with.”