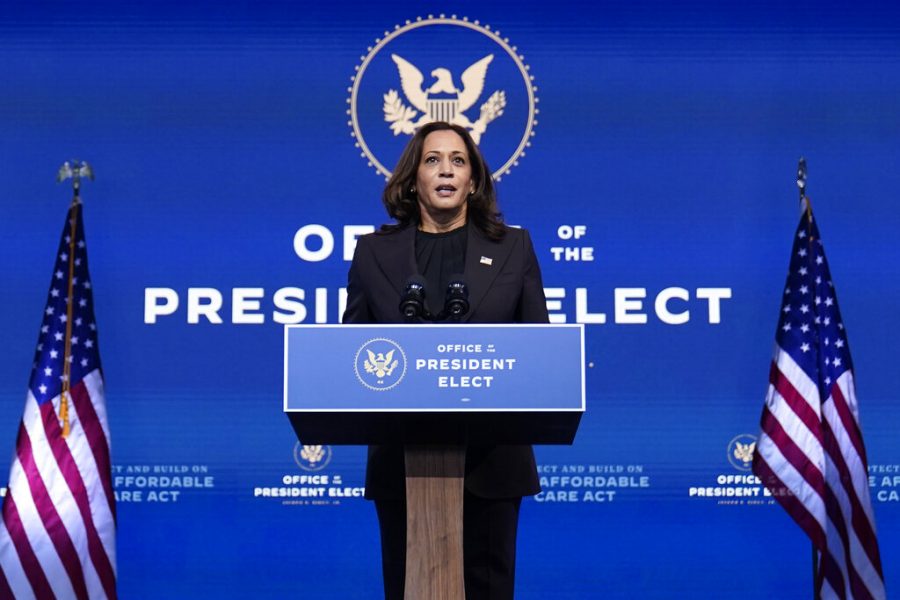 Vice President-elect Kamala Harris made history last week as the first woman of color to be elected vice president, shattering a glass ceiling for women and people of color.

With Harris set to take office in January, one question remains: Who will replace her in the Senate?

Harris’ Senate term began in 2017 and will expire in 2023. In the meantime, a new senator must fill her seat until the term ends.

According to the U.S. Senate’s website, the 17th Amendment, which allows for the direct election of senators, grants state legislatures the power to authorize the governor “to appoint a replacement” to finish the term or “to hold office until a special election can take place.”

California is one of 37 states that allows the governor to make an appointment to fill the seat with the appointee serving until the “next regularly scheduled general election,” according to the National Conference of State Legislatures (NCSL).

In finding a replacement to fill Harris’ seat, California Gov. Gavin Newsom is facing pressure from several groups regarding whom he’ll appoint, including women’s groups and the state’s Black politicians, who want Newsom to select a Black woman to fill the vacant senate seat.

Rep. Karen Bass from Los Angeles, the head of the Congressional Black Caucus and the former speaker of the California Assembly, is high on the list as a replacement for Harris. Bass was also considered by President-elect Joe Biden as a potential pick for vice president.

“She certainly would be a strong choice if Gov. Newsom wants to appoint a Black woman,” Bury said.

Rep. Barbara Lee from Oakland, another Black congresswoman and a progressive icon, is also under consideration.

Bury said it is possible that Newsom’s decision may be impacted by “geographical considerations.”

“Since Senator Diane Feinstein is from northern California, it’s quite possible that Gov. Newsom is going to want to appoint someone from the L.A. area,” Bury said.

Others are urging the governor to appoint California’s first Hispanic senator in the state’s 170-year history, given that Latinos make up the state’s largest demographic population.

According to the Associated Press, the Latino Victory Fund, a political action committee, is supporting Secretary of State Alex Padilla, a close supporter of the governor. California Attorney General Xavier Becerra, who is also Hispanic, is another top contender on Gov. Newsom’s list.

Ben Epstein, an associate professor of political science at DePaul, said the governor’s relationship with these two individuals could impact his decision.

“The more he knows someone the more he can trust them,” Epstein said. “There are a few who have worked with him and for him that are high on the list. Alex Padilla, the current secretary of state and Xavier Becerra, [the] current attorney general and former house member, are on this list.”

Bury said close relationships may not have too much of an impact on Newsom’s decision as governors in this position will do “the thing that’s the best for them politically and the best for California politically.”

“Friendship may actually not be that high on the list, but like Vice President Biden in picking Kamala Harris, Gov. Newsom is on record saying he wants somebody ‘simpatico’ — somebody who shares his basic fundamental values,” Bury said.

Selecting Padilla or Becerra would give Newsom an opportunity to “diversify” other state offices with someone from a minority group or a woman as he would need to appoint someone to fill their seats, according to the AP.

Bury said that this is “absolutely true.”

“In fact, the former governor [of California], Jerry Brown, has been outspoken on that one point that it would make sense for Gov. Newsom to take somebody from the administration so that he can make two important choices: one for the U.S. Senate and one for a big statewide job such as secretary of state, such as attorney general,” Bury said.

“It looks to me like Alex Padilla is a very, very strong contender just because of his relationship with Gavin Newsom and that would also fulfill the two birds with one stone argument as would the attorney general, Xavier Becerra, but Becerra from what I’ve been able to find out just does not have that close relationship with Gavin Newsom,” he added.

Other historic contenders to fill Harris’ seat include Long Beach mayor Robert Garcia, who, if appointed, would be the first Latino and first openly gay California senator. Toni Atkins from San Diego, the pro tempore of the California State Senate, is also part of the LGBTQ community and would be a “historic choice,” according to Politico.

While there is no set time frame in which Newsom must appoint a new senator, Bury explained that people expect him to choose Harris’ replacement by Inauguration Day or shortly after, and that his timing could impact the make-up numbers of the Senate.

“It’s not going to change the partisan make-up of the Senate,” Bury said. “The governor is a Democrat. He will appoint a Democrat and Republicans will hold a 52 to 48 majority in the U.S. Senate. The only hurry is to make sure that the new senator is installed in case his or her vote is needed on something but it’s not going to change the composure of the Senate in terms of who has the majority.”