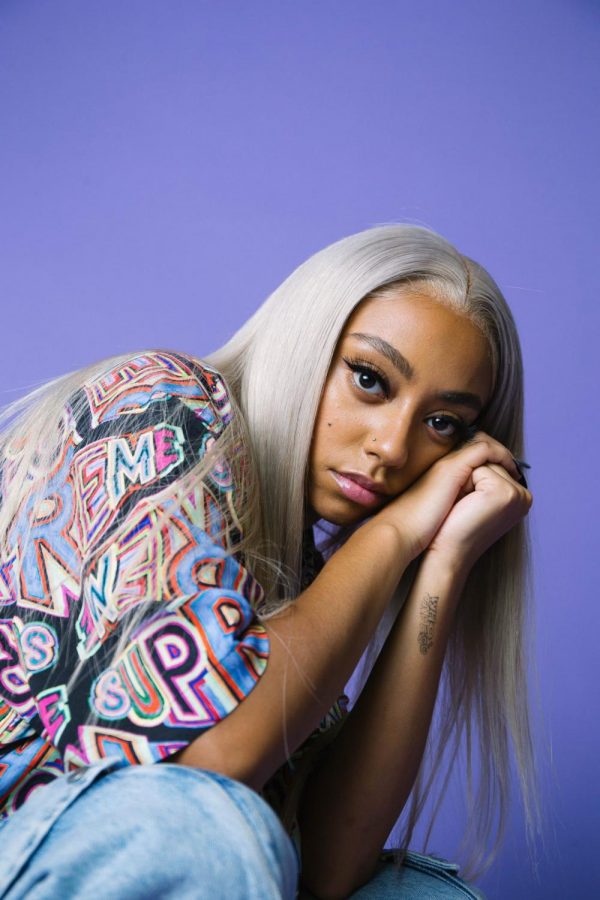 Album art is meant to tell a story, as the singular piece of visual media is meant to represent the project as a whole, musically and aesthetically. At first glance, rapper and singer Abby Jasmine’s newest release, “Who Cares? (Deluxe),” is appealing enough to garner a potential second glance, but not much beyond that. It’s when I listened to Jasmine tell her experiences that I began to look further, giving context to her artistic direction beyond her multiple albums and EPs.

“I wanted to showcase having the finer things and people catering to you, but not being concerned about all of that,” Jasmine described while detailing how the cover art came about. “Material things don’t excite me, I’m a very down to earth person.”

The carefree and fleeting tone that Abby carries in conversation makes her flow on songs like “Stay With Me” and “Groovy” all the more soothing. The emotion never feels separated from her vocals, letting the instrumentals follow her lead, rather than the other way around. Cadence seems to come easy to Abby, but creativity is a more complicated process, with the pandemic having adverse effects on this artist’s musical output.

“I lacked a lot of self-discipline before the pandemic,” Abby explained. “I’m big on my house being my relaxation zone. I don’t think about work or making a song here. This is where I detox from all that stuff. When you’re in the studio, you get people on your ass. When you’re at home, you gotta stay on top of yourself.”

Being stuck at home and forcing yourself to be productive is a steady struggle for a lot of us. Regardless of how much work we actually get done, there is often a lot of downtime. These suggestions might have been cut back in March, but people are just kind of sick of this right now.

Social media is harder to avoid than ever, but Abby tries to find the joy in this attachment. While the artist has just under 350,000 Instagram followers, her Twitter is where she gets to know her fans and even communicate with them on a regular basis.

“I think it’s important for artists to engage with their fans in any way that they can,” Abby said. “For me, I like to be on Twitter a lot. Everything comes in real time. For Instagram, it’s hard to reply to people and have full on conversations. Twitter is the best platform to engage with my fans. Everyone needs to be active on social media to a certain extent. Too much of anything is bad.”

Abby knows social media, just as many Gen-Zers do. They grew up with it. But Abby took what can be a detriment to many people’s lives and made a career off of it. That was not the intention though, as her relationship with social media is a story in and of itself. She was a Vine freestyling sensation who transitioned to music, successfully. Her welcoming presence on social media now reflects her lonely 14-year-old self.

“I definitely did get on social media because I didn’t have any friends,” Abby admitted. “I had like one or two friends, but my parents were really strict and I couldn’t really go outside or have too much company. From there I decided to hop on social media, I might have been 14. I was always into making funny videos. Growing up, my cousins and I would make home videos and show them at family dinner parties. I always liked to make people laugh.”

Those inventive childhood instincts were a gateway to her future career in performance and entertainment, but also to an early sense of self-expression and digital kinship, which both pieced together nicely when Vine came about in 2013.

“I think that’s when I started doing Vine because people would laugh with me,” Abby recalled. “I was meeting new people and getting new opportunities that I wouldn’t normally get. I was in high school, kids picked on me. It was kind of an escape from my actual life and how shit can suck when you’re a teenager. Social media is a great place to meet people safely! Anybody who is in that same place and you don’t wanna feel alone, there’s a community for everybody on social media.”

Proving yourself as an artist is a never-ending obstacle course. You define your own limits, but only as much as the predetermined struggles allow. Being a rapper and a woman in the music industry immediately labels you as a “female rapper.”

Lately though, Megan Thee Stallion, City Girls, Flo Milli, Mulatto, Rico Nasty and so many more rappers are proving that this inherent category can’t, and shouldn’t, be boxed in. Pitfalls of prejudice persist in Abby Jasmine’s musical journey as it does in so many others, but she manages to maintain optimism despite the preconceptions.

“Some days I wake up like, ‘it’s lit! I’m a woman in the industry.’” Jasmine explained. “Other days, I’m like ‘damn, I’m a woman in the industry.’ I gotta prove myself to everybody! I’m an optimistic person and I feel like I stand out. There’s a lot of us [women in the music industry], but there isn’t. A lot of the women we see get co-signed by guys. Women gotta co-sign each other. People be waiting for Drake to co-sign them!”

What began as a teenager looking for solace through social media led to a press conference explaining her art to journalists nationwide. This immediate contrast in scope is as apparent as it is impressive, with her music granting sporadic glimpses into just how she managed to become who she is.

“For the people who have been following me for a while and are present on social media, I want them to take away growth.” Jasmine expressed. “In the music, in the writing, and just me as a person. You can find out things about me from my first tape to now. I feel like I’ve been sprinkling little bits of information about myself. I want people to grow too! I love seeing growth in people, seeing people learn new things. I think that’s important.”

It almost feels like that 14 year-old Vine creator would be a big fan of Jasmine, a sense of growth that comes to fruition when listening to the rapper and singer melodically entice and sooth on her new album, “Who Cares (Deluxe),” which is on all streaming platforms now.