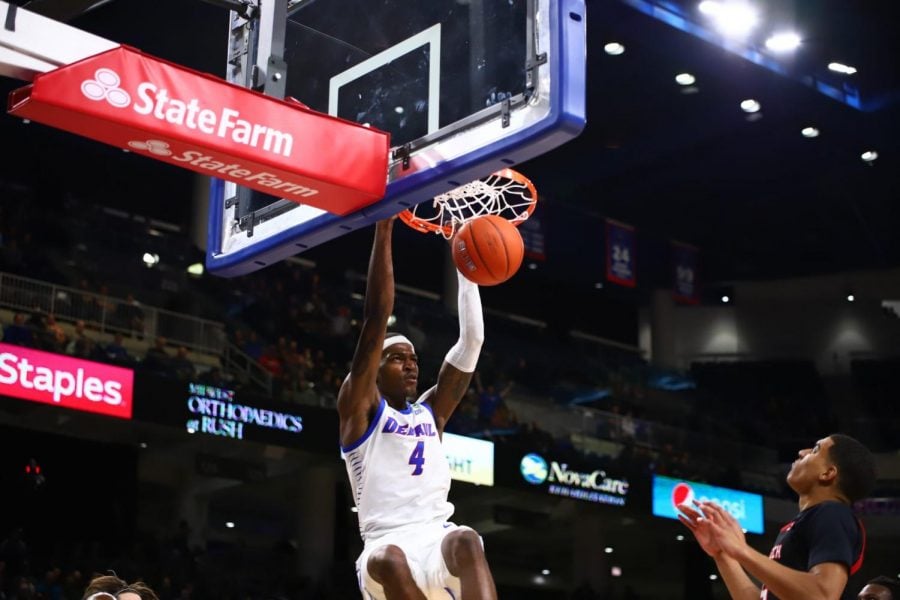 Former DePaul forward Paul Reed has been selected by the Philadelphia 76ers with the 58th pick in the 2020 NBA Draft.

Reed is the first DePaul player taken in the draft since both Wilson Chandler and Sammy Mejia were selected in the 2007 NBA Draft. The 6-foot-9 forward had fluctuated between the first and second round in most mock drafts, but was eventually taken by the 76ers.

“I have always been overlooked my whole life,” Reed said during an interview with The DePaulia in June. “I always have been underrated. People don’t always see my full potential or how good I can be, or how good I am. It’s normal for me, they don’t owe me anything. I know I got a chip on my shoulder because I feel like I got to prove to a lot of people that I can actually play, and I can compete on the highest level. Before the games, I would always tell myself they got me messed up because nobody knew who I was and still don’t know who I am. I still feel the same way.”

At DePaul, Reed’s numbers improved from his freshman to his junior season. After coming off the bench for 28 games in his freshman year, Reed saw more playing time next season and that resulted in being named the Big East Most Improved Player of the Year.

“Once I got into the starting lineup, it was over with,” Reed said. “I knew I could make my impact on the game.”

During the 2019-2020 season, Reed’s junior year, he became one of the Blue Demons’ focal points on offense and defense. DePaul started the season going 12-1 before entering Big East play, which saw the Blue Demons stumble to a 3-15 record and a last place finish.

But Reed continued to put up consistent numbers throughout the season, finishing the year averaging 15.7 points and 10.7 rebounds per game — the only player in the Big East to average a double-double.

Reed missed the last three regular season games, but returned to play in the first round of the Big East Tournament against Xavier. In a 71-67 victory over the Musketeers, Reed scored 23 points and grabbed 12 rebounds. But Reed and the Blue Demons didn’t get a chance to face Villanova in the next round because the season was cut short due to the Covid-19 pandemic.

“I was a kid coming in, I was 17 and just turned 18 when I got to campus, and I grew up at DePaul,” Reed said. “I matured a lot being at DePaul. The staff helped me mature, they talked to me, they were with me. They helped me grow mentally as well as physically.”

Now a professional basketball player, Reed joins Max Strus and Wilson Chandler as the only former DePaul players to currently play in the NB. Billy Garrett Jr. played a couple of games for the New York Knicks in 2019, but has been playing overseas the last two seasons.