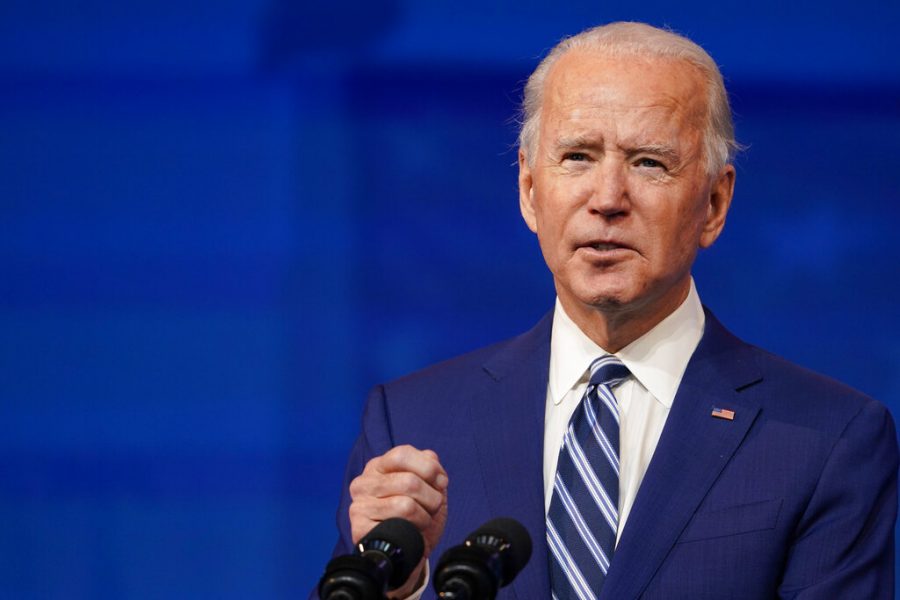 President-elect Joe Biden speaks during an event to announce his choice of retired Army Gen. Lloyd Austin to be secretary of defense, at The Queen theater in Wilmington, Del., Wednesday, Dec. 9, 2020. (AP Photo/Susan Walsh)

Throughout the 2020 presidential campaign, President Donald Trump attempted to portray President-elect Joe Biden as a socialist.

“Biden has made a corrupt bargain in exchange for his party’s nomination,” Trump said during his Pennsylvania rally on Oct. 13. “He has handed control to the socialists and Marxists and left-wing extremists like his vice-presidential candidate.”

But Biden has refuted those claims time and time again. In September, in an interview with WLUK, a TV station in Wisconsin, Biden explained that he is not a socialist.

“I beat the socialist,” Biden said, referring to Sen. Bernie Sanders, one of Biden’s challengers for the Democratic presidential nomination who describes himself as a democratic socialist. “That’s how I got elected. That’s how I got the nomination. Do I look like a socialist? Look at my career — my whole career. I am not a socialist.”

Throughout his career in government, Biden has worked to paint himself as a moderate Democrat. As a candidate for president, he expressed his opposition to policies such as “Medicare for All” that would create a single-payer, universal health care system advocated for by Sanders and other progressives.

“He has a long voting record in the U.S. Senate that is that of a moderate Democrat,” said R. Craig Sautter, an adjunct professor at DePaul University with experience in producing political ads for candidates. “In fact, as a politician who has long had his eye on the presidency, Biden has sought to stay in the middle of the road to attract voters who, in the majority, are moderates and pragmatists.”

Sautter added that other Democrats that ran for the party’s nomination for president, including more progressive candidates, criticized Biden’s record.

“As a senator from Delaware, where many corporations locate their headquarters for tax reasons, Senator Biden often crafted bills in their favor,” Sautter said. “He was, progressives charge, a spokesperson for the credit card companies and banks.”

Despite this criticism from his Democratic challengers during the campaign, policy ideas that Biden has advocated for, such as expanding health care coverage, improving the Affordable Care Act and forming a public health insurance option, have been framed by the Trump campaign as leaning towards socialist policies. But this is far from socialism.

According to PolitiFact,  socialism refers to “complete government ownership of production.” Biden’s policies, including his economic plan to create manufacturing and infrastructure jobs, do not advocate for the government having total control over these industries, nor would his health care plan as he has supported keeping private health insurance.

Wayne Steger, a professor of political science at DePaul, said partisan loyalties have a strong impact in the ways that both parties attempt to portray each other.

“Both parties look at the extremists on the other side and try to portray it that way,” Steger said. “Socialism would be one of the big things that Republicans could attack Democrats on and so, what it’s doing is saying, ‘Moderates, you may not like Trump, but a vote for Joe Biden is a vote for AOC government’ and that’s not going to be acceptable to a really large number of moderates.”

Going into this election season, many Americans had concerns regarding the effects of the Covid-19 pandemic on the economy.

Steger explained how many “low-income service workers,” predominantly Trump supporters, were hurt by the economic shutdowns and how Biden’s plans for addressing the pandemic impacted their views.

“When Biden said, ‘We’re going to listen to science, we may have to have shutdowns,’ that kind of messaging just scared the heck out of lots of low-income voters who just didn’t want that to happen especially if you’re younger and likely to survive Covid,” Steger said.

Steger added that the characterization of the economic shutdowns as socialist along with Biden and the Democratic party’s focus on science with respect to the pandemic “really worked to mobilize Republicans against that.”

“This was a backlash against the economic visions between the two parties and how they dealt with Covid,” Steger said.

With Biden set to take office in January, he will have to work with a divided government to achieve his policy initiatives with Democrats remaining in control of the House of Representatives and Republicans maintaining their majority in the Senate, though that could change depending on the outcome of the two Senate runoff races in Georgia.

With a polarized Congress, doubts and false claims raised by Trump and his allies that pertain to the results of the election and the so-called categorization of Biden as a socialist, Steger explained that this may make it more difficult for Biden to push through his policy agenda.

“This and the continued delegitimization of the election which… multiple surveys are showing that around 70 percent of Republicans believe that, so you gotta keep that in mind, the combination of this idea that Joe Biden is [a] socialist that means anything he’s trying to do is socialist… and he’s not a legitimate president” Steger said. “You combine those two and it’s going to be really hard for almost any Republicans to support him.”