COLUMN: College basketball lacks leadership as the sport struggles to play through a pandemic 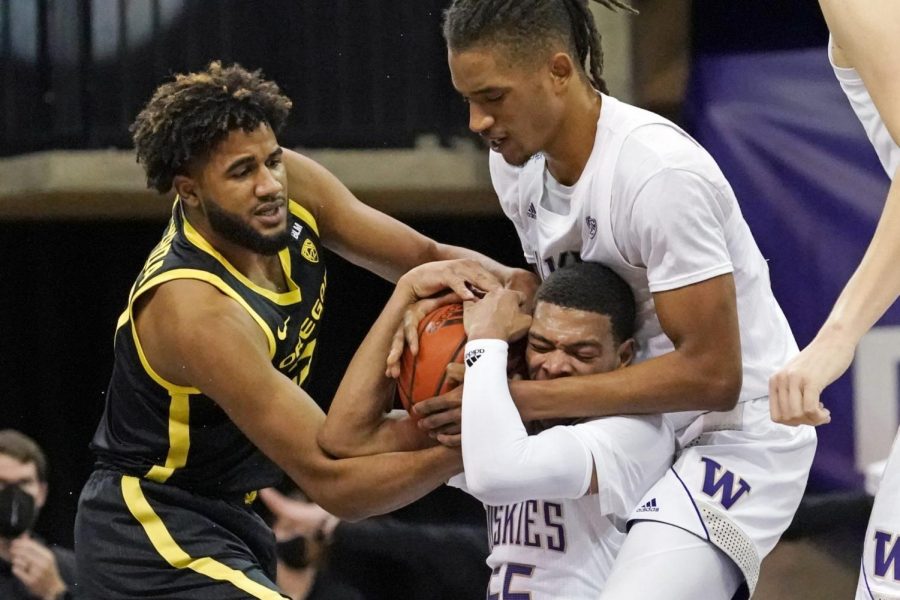 : Oregon's LJ Figueroa, left, struggles for control of the ball with Washington's Quade Green, bottom right, and Hameir Wright during the first half of an NCAA college basketball game Saturday, Dec. 12, 2020, in Seattle.

There is only one word that can describe the current state of college basketball: dysfunctional.

As the Covid-19 pandemic continues to worsen in America, college basketball is hell-bent on playing a full season and then having the NCAA Tournament in March.

One glaring issue with that: Who in the heck is going to make sure the sport makes it to March?

The sport lacks any sort of leadership or guidance from the NCAA to ensure a full season can be played safely, which is proving hard enough considering how prevalent the virus is throughout the country.

But the NCAA is not even trying to help college basketball or make sure there are clear protocols in place so that each school doesn’t have to do this alone. Instead, the NCAA only mandated that teams test three times per week, pushed back the start of the season to Nov. 25 and announced the NCAA Tournament will take place in one location this season.

In other words, if every team is testing three times per week, then each school and conference can handle the rest.

Maybe in the minds of the people leading the NCAA that sounded like a great plan, but two weeks into the season, that plan looks more and more foolish.

Games are getting canceled and postponed by the hour. Teams are pausing activities each day because of positive tests. Heck, some teams have yet to even play a game.

One of those teams is the DePaul men’s basketball team, which paused all team activities on Tuesday for the second time this season. The Blue Demons were all set to finally play their first game of the season on Sunday at Iowa State, but an hour before tipoff, the game was canceled because of a positive test on DePaul’s team.

Two days later, the team paused all team activities for the remainder of the week due to additional Covid-19 test results. But a report from college basketball repoter Andrew Slater claims that most tests have come back as false positives. The DePaulia reached out to the athletic department regarding that report on Tuesday, but have yet to hear back.

The DePaulia also asked DePaul spokeswoman Carol Hughes if the university can provide the exact number of positive cases within the men’s basketball program since Dec. 6.

“It is important to note that DePaul reports all confirmed cases, does not distinguish between student-athletes and non-student-athletes in its reports, and does not identify who has tested positive,” the response read.

That response did not exactly answer our question, but DePaul has reported five new positive cases since Tuesday; in every instance, the individual was last on campus in the Sullivan Athletic Center or McCabe Hall. The DePaulia has not been able to confirm if these individuals are part of the men’s basketball team.

But if it’s true that the team has mostly received false positives and still has to pause, then how are there no protocols in place to deal with these types of situations?

All of these issues should have been addressed before the start of the season. Instead, the NCAA was too busy worrying about March Madness rather than how we could play this season safely.

Some teams are pausing after one positive test, and there are some teams that are continuing to play even with a positive Covid-19 result. Before No. 1 Gonzaga took on No. 6 Kansas on Nov. 26, the former had a positive test return and still went ahead with playing the game. Only nine days later, they learned they had two more positive cases, and have now shut down until Dec. 14.

Duke men’s basketball head coach Mike Krzyzewski also addressed his concerns with playing in the middle of a pandemic after his team’s loss to Illinois on Tuesday.

“For the good of the game and for the good of the safety and mental and physical health of players and staff, we need to constantly look at this thing,” Krzyzewski told reporters after the game. “ … I don’t think it feels right to anybody.”

How can it feel right when student-athletes are getting treated like essential workers but aren’t getting paid for their services? Teams are flying all over the country trying to play as many games possible, even with the Center for Disease Control advising people not to travel during the holiday season.

It’s complete and utter madness. The NCAA has left each conference and school to figure out everything in the hopes there are 68 teams left in time for Selection Sunday in March.

So far, that plan is failing.