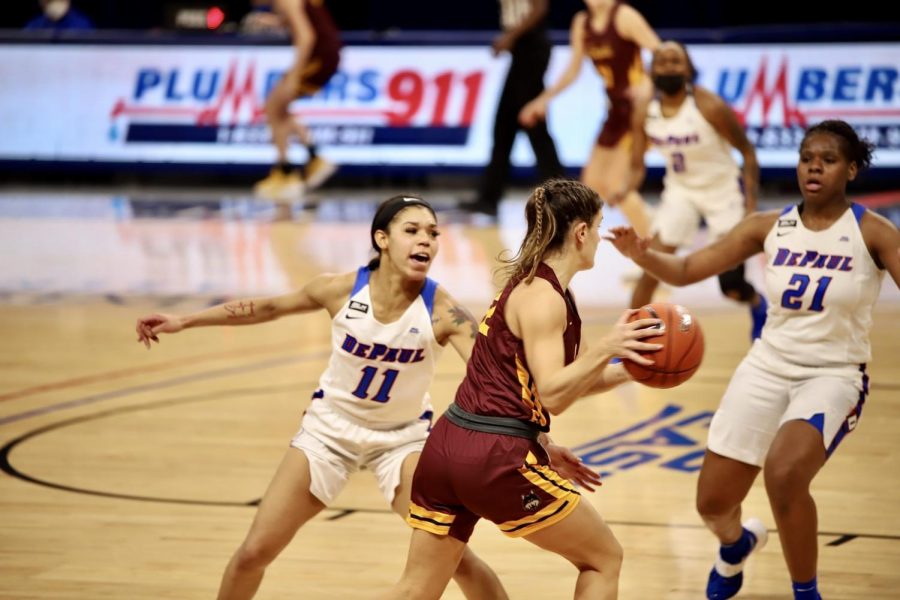 Sonya Morris and Darrione Rogers go out to close a Loyola defender on Sunday at Wintrust Arena.

DePaul has dominated the series over Loyola in the last couple of decades, winning four in a row and 26 of the last 27 meetings. The Blue Demons, however, had a tougher time with the Ramblers on Sunday as the offense lacked its usual spark for three quarters.

But DePaul was able to come away with a 76-67 victory at Wintrust Arena with a dominate display from juniors Lexi Held and Sonya Morris in the fourth quarter. The Blue Demons, who were coming off an eight-day break following their last game, now sit at 2-2 on the season.

Even with the victory over Loyola, DePaul’s offense struggled again for 35 minutes. The Blue Demons’ offense was out of sync against No. 5 Louisville in the Jimmy V Classic on Dec. 4, shooting only 28.4 percent from the field and only making four 3-pointers in a 116-75 blowout loss to the Cardinals.

The numbers weren’t as bad against Loyola, but the team only managed to score 47 points in the first three quarters and only hit five 3-pointers.

But DePaul went into another gear in the final 10 minutes as they turned up the pressure and started clicking on offense. The defense forced 11 turnovers and the offense started to get out in transition for easier buckets.

But it was the team’s two best players, Held and Morris, that changed this game and proved why they were selected to the All-Big East Preseason Team. The duo went on a 15-0 run in a four-minute stretch, putting the Blue Demons up 72-59 and securing the victory for DePaul.

“I was able to get a couple of shots around the rim and get to the free-throw line, so I think that helped me make shots outside,” Held said.

Morris finished the game with 26 points on 9-of-20 shooting, while Held had 17 points on 6-of-15 shooting. The team again struggled shooting from behind the arc with a 7-of-37 performance on Sunday.

“Those last four minutes are really crunch time and it’s really time to handle it,” Morris said. “So, I think that’s what we did, we hunkered down and handled what we are supposed to handle.”

DePaul came into the game averaging over 90 points per game, but the Ramblers were able to force the Blue Demons to take tough shots from the 3-point line for most of the game. The issues for the Blue Demons began in the first quarter with only 2-of-10 makes from behind the arc, but the home team was able to pick up 10 points inside the paint.

The Blue Demons were able to hold a 19-17 advantage after the first quarter, but the poor shooting continued in the second quarter.  Besides 10 points combined from Lexi Held and Kendall Holmes, the rest of DePaul’s team only scored six points..

Loyola controlled most of the second quarter and that resulted in them taking a 30-25 lead in the middle of the quarter. The Ramblers’ bench was behind the surge in the second quarter, scoring 11 of the team’s 17 points. But Holmes’ 3-pointer right at the buzzer gave DePaul a slim 35-34 lead into halftime.

“They forced us to shoot over the top and it’s not always the rhythm of the game,” Morris said. “So, I think they definitely tried to take us outside of that. I feel they out-fought us on the boards. They came ready to play, they came ready to fight. They don’t really care about us being DePaul, us being ranked, they were ready to play. I think that’s what it was of just really a sense of wanting to win, who wants to win more.”

The Ramblers did an even better job in the third quarter of containing DePaul on the offensive end, with the Blue Demons only making five shots and scoring 12 points in the quarter. Loyola got 11 points from its bench and took a 53-47 lead into the fourth quarter.

But the Blue Demons’ push in the final quarter was enough to get the job done on Sunday and get the team back on track.

DePaul’s next game, however, does not get any easier as No. 9 Kentucky comes to Wintrust Arena in three days. The Blue Demons are 0-2 so far against ranked teams, with losses to Texas A&M and Louisville.