Doug Bruno picks up win No. 725 as DePaul upsets No. 9 Kentucky 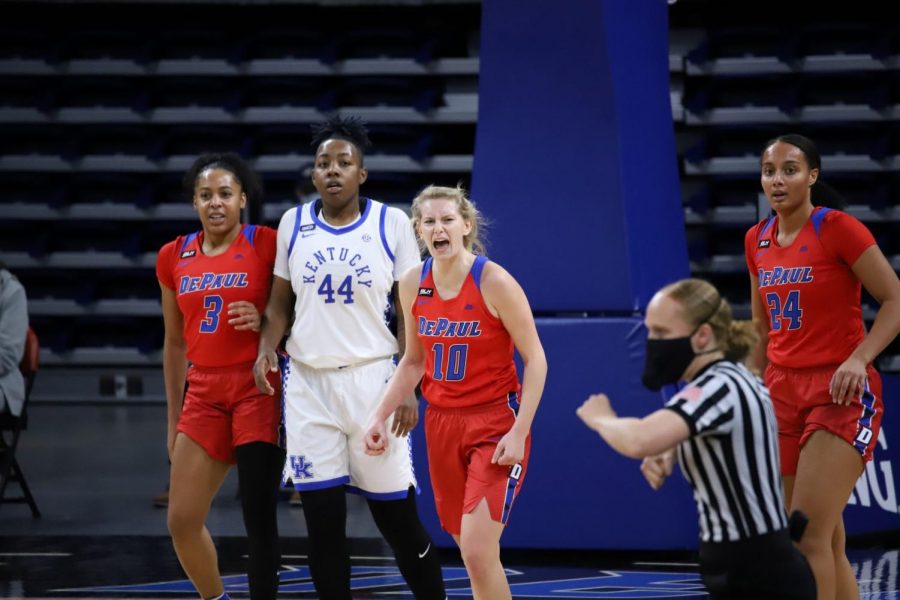 DePaul was looking to build off their win against Loyola when they took on the No. 9 Kentucky Wildcats at Wintrust Arena on Wednesday. The Blue Demons were also trying to break a streak of two losses against ranked opponents.

DePaul managed not only to break that streak by beating Kentucky 86-82, head coach Doug Bruno picked up his 725th win in the process. That win puts him as the winningest coach in university history, surpassing the legendary men’s basketball head coach Ray Meyer, who coached at DePaul from 1945-74 and leading the Blue Demons to the 1979 Final Four.

The win did not come easy as DePaul struggled early on, committing a number of turnovers.  Both teams combined for 25 turnovers in the first half, including 11 from the Wildcats in the first quarter. Despite the sloppy play, DePaul hung in the game and only trailed by two at the half, 37-35.

“In the locker room, I know for me personally, it was a struggle because first half I pretty much sat the whole second quarter because I was in foul trouble,” said senior guard Deja Church. “At half time we just knew we had to come out in the third quarter strong and hard. I think we were down two or four but we started the third quarter with the mindset that it was a 0-0 game and we wanted this win bad and that’s what we did.”

Church finished the game with the second-most points on the team with 18. She shot 6 for 12 from the field, including 2 for 2 from the 3-point line.

DePaul was able to pick up the pace in the third quarter with Church leading the way with 11 points in the quarter. The Blue Demons were also able to limit the Wildcats to one possession every time down the floor, and that resulted in only 16 points for the visitors in the third.

It was a tight game all night but DePaul managed to pull away in the fourth quarter. Kentucky tried to mount a comeback by converting on a couple of 3-points shots. But DePaul answered straight back with clutch 3-pointers of their own.

Morris led the team with 23 points, going 8 for 13 from the field. Lexi Held, Dee Bekelja and Darrione Rogers all contributed 12 points, respectively. All of DePaul’s starters ended with double-digits in points.

The win over Kentucky was also the Blue Demons’ first win over a top ten team since March 20, 2016 when they beat Louisville, at Louisville, 73-72, in the NCAA second round game.

DePaul’s next game will see them face off against the Georgetown Hoyas at home on Saturday to begin conference play.