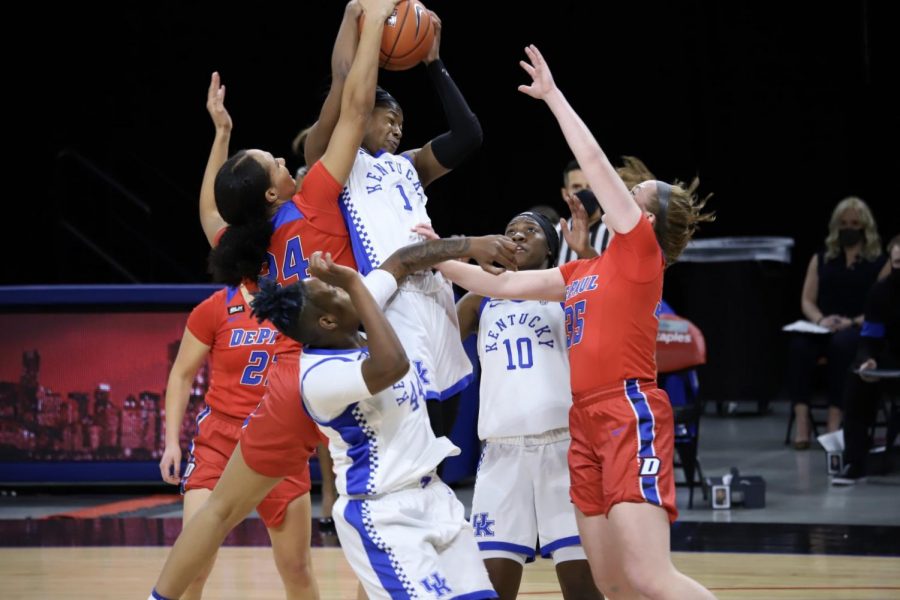 DePaul players go up for a block during the Blue Demons' game against No. 9 Kentucky on Wednesday at Wintrust Arena.

DePaul’s style of play has been characterized in the past by one simple phrase: Bruno Ball.

But what is this style of play and why has it been so effective? Simply put, Bruno Ball is positionless basketball that isn’t your traditional way to run an offense. All five players on the court can handle the ball at any given moment while also having to guard the other team’s biggest player.

But it doesn’t mean that’s how DePaul has to play all the time. And that was the case in the team’s 86-82 upset win over No. 9 Kentucky on Wednesday at Wintrust Arena — DePaul’s first win over a top-10 team since the 2016 NCAA Tournament.

Strong defense and a more balanced offensive attack was the key for DePaul against Wednesday, which led to forcing 23 turnovers and scoring 50 points in the paint.

The Blue Demons struggled early on offense against the Wildcats, committing eight turnovers in the first quarter and only making two shots in the first three minutes. Head coach Doug Bruno was not pleased with how his team started the game as Kentucky jumped out to an early 11-4 lead.

“I really thought we came out soft, soft and tight — a messy place to begin the game,” Bruno said. “I’m just really proud of how they settled down after about the first five minutes.”

DePaul was able to settle down after the first media timeout and it was because of its play on the defensive end. Kentucky struggled to hold onto the ball and committed 11 turnovers of their own in the first quarter, leading to 11 DePaul points.

Most of the Blue Demons’ early offense came inside the paint as Kentucky tried to shut down the 3-point line. DePaul has been known for being a high-volume 3-point shooting team in past seasons, but they only attempted eight in the first half and made two of them.

Overall, the team was 7-of-18 from behind the arc in the win over Kentucky.

But those two wins might not have been possible without the learning experience they got against Louisville where the offense failed to adjust after an 0-of-14 start from behind the arc.

“We didn’t want that to happen again,” senior guard Deja Church said after the win over Kentucky. “That experience, it was a heck of an experience, but it wasn’t a good feeling. So, we were determined, we knew that was not going to happen again.”

Without the usually reliable 3-point shot, DePaul attacked the rim against a taller team in Kentucky and had a 50-48 advantage in points in the paint. But it was because the Blue Demons moved the ball and had players driving to the basket, which resulted in 24 assists on 34 made buckets, that allowed them to have an efficient 34-of-68 game against the Wildcats.

Like in the Louisville game, DePaul had a strong first quarter and led 22-21. But the second quarter was when the Cardinals took over control through their defense and shooting.

The Blue Demons, however, managed not to let that happen on Wednesday.

With Lexi Held, Sonya Morris and Church in foul trouble, Bruno went deep into his bench for the second quarter. The offense only scored 13 points and went 0-of-3 from behind the arc, but a stingy and feisty defense limited the Wildcats to only 16 points.

Whether it was communicating and switching on screens, rotating to take a charge or closing out on a 3-point shooter, DePaul’s defense held Kentucky to 33.3 percent from the field, 14.3 percent from the 3-point line and only two free-throw attempts in the quarter.

The Blue Demons were at a disadvantage in terms of size and length against the Wildcats, which forced DePaul into sending double teams inside against Dre’Una Edwards, who only scored four points in the second quarter.

“Sent [the] kitchen sink at her, sent everybody at her,” Bruno on DePaul’s defense against Edwards. “We made a decision we are going to take a chance on their outside shooters making shots, and any time she touched the ball, we are going to try to send everyone at her that wasn’t in the post.”

With the size mismatch inside, Kentucky was able to out-rebound DePaul 28-16 in the first half. But the Blue Demons did a better job of crashing the boards in the second half, as the Wildcats only had an 18-15 advantage.

“I can’t make you bigger, I can’t make my players bigger,” Bruno said. “Rebounding is your head, heart and guts, so I thought we rebounded a lot better in the second half.”

DePaul’s rebounding improved in the second half and the team’s defense continued to frustrate a talented Kentucky offense. Rhyne Howard, who is a National Player of the Year candidate, only scored two points in the third quarter. The entire Wildcats team again struggled shooting from deep with only one 3-point make in the quarter.

The Blue Demons took a 57-53 lead into the fourth quarter, and that’s when the offense really came alive with a 29-point performance. DePaul made 9 of its first 10 shots as the Wildcats looked to mount a comeback.

Kentucky got within one, 61-60, with eight minutes to play, but the Blue Demons continued to make shots throughout the quarter. Eventually, DePaul went on a 7-0 run and was able to close out the victory by converting free throws.

“The last five minutes, that’s when we know it’s make it or break it, especially in close games like that we have to have the mental toughness, wisdom and we have got to stay calm and stay poised,” Morris said.

Morris finished the game with 23 points on 8-of-13 shooting, while the four other starters — Held, Church, Dee Bekelja and Darrione Rogers — also scored in double figures.

The win over Kentucky is DePaul’s first victory over a ranked team in three attempts this season. The Blue Demons don’t shy away from playing top-25 teams, as it helps them prepare for tough games in February and March, but it’s also a great way to build a strong resume.

DePaul showed they are much more than just “Bruno Ball” against Kentucky. The defense played big against a top-10 team and the offense didn’t settle for 3-point shots. A more balanced and feistier team bodes well for the Blue Demons in the long run.

“You can’t just live and die by the three,” Bruno said. “We want to be able to shoot the three, but there is more to this game offensively than just shooting the three. I think the players executed some offense tonight that showed we can do some more things than just simply shoot the three.”