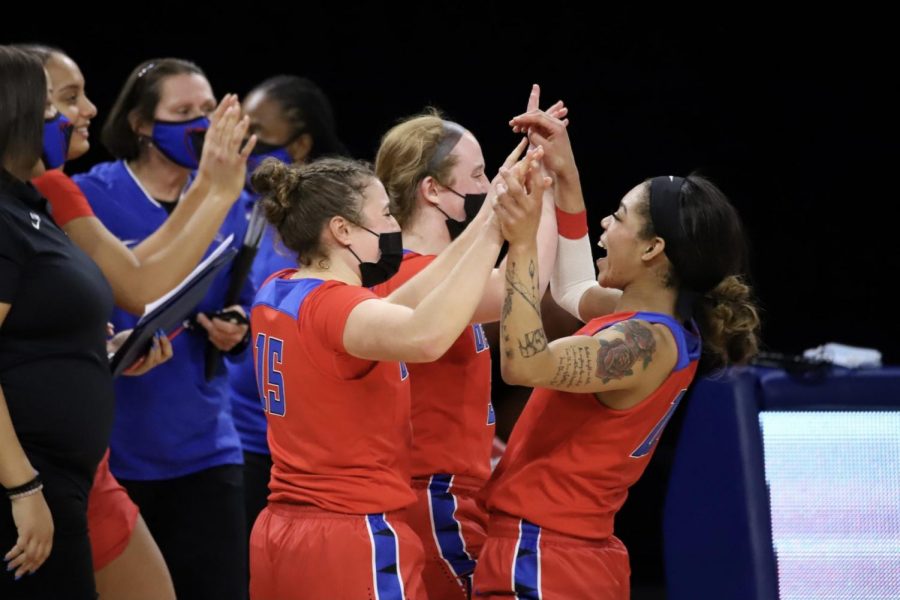 DePaul players celebrate together after defeating No. 9 Kentucky on Dec. 16 at Wintrust Arena.

After a 1-2 start to the 2020-21 season, DePaul has been able to respond with three straight wins against Loyola Chicago, No. 9 Kentucky and Georgetown.

The Blue Demons took that three game winning streak on the road to Creighton on Tuesday. It was just last season when the Bluejays came into Wintrust Arena and snapped DePaul’s nine- game conference winning streak.

Creighton, who has started the season at 2-5, again gave DePaul a good test but the Blue Demons were able to pull out a 90-81 victory for their third conference win of the season.

Both teams approach the game in completely different ways with DePaul near the top in the NCAA in possessions per game, while Creighton ranks 301th in that category. The Blue Demons are also tied for 12th in points per game (88), while the Bluejays rank 215th (63.1).

But the Bluejays had to adjust to the Blue Demons’ pace of play on Tuesday and it worked for them in the first half. Even though DePaul jumped out to an early 8-2 lead, Creighton began to settle down towards the middle of the first quarter.

The home team went on two 5-0 runs in the the first quarter, but it was DePaul who held a slim 26-24 lead heading into the second period. The Blue Demons also got the debut of sophomore transfer Jorie Allen on Tuesday night after she was declared eligible last week.

Allen, a 6-foot-1 forward, made an impact right away in the first half as she scored eight points and grabbed three rebounds. But it was Creighton’s freshman forward Emma Ronsiek that was the dominant force in the paint.

Ronsiek scored 15 points on 7-of-8 shooting in the first half and was the catalyst behind her team’s 45-41 lead heading into halftime. She finished the game with 28 points and 10 rebounds. DePaul’s offense was also efficient in the first 20 minutes, shooting 48.6 percent from the field and 41.2 percent from behind the arc.

A key for Creighton against DePaul was limiting the turnovers because the Blue Demons are second in the nation in forcing turnovers (26) per game. Well, the Bluejays did just that in the first half with only eight, but then struggled in the third quarter with seven.

Even with the high amount of turnovers in the third quarter, Creighton still shot 8-of-15 from the field and held a 63-60 lead going into the fourth quarter. But as the fourth quarters against Loyola Chicago and Kentucky showed, DePaul can go into another gear when it’s closing time.

Continuing from the end of the third quarter, the Blue Demons went on a 13-0 run to take a 70-63 and never looked back from there. DePaul’s shooting numbers improved even more in the second half as the visitors shot 75 percent from the field 62.5 percent from the 3-point line, with 28 of the team’s 49 points coming inside the paint.

The Blue Demons are now 5-2 on the season and 2-0 in Big East play, but will play their fourth ranked team on Dec. 29 when they pay a visit to No. 3 UConn. The Huskies are in their first season back in the Big East after leaving in 2013 and are already 4-0 in conference play.

DePaul was initially supposed to be off until Jan. 7 after Tuesday’s game, but the Big East moved two games for them before facing Butler. Now, the Blue Demons will play UConn in a week and then travel to Marquette on Jan. 3.